Feed Them To The Forest take on the A-Z Questionaire

Feed Them To The Forest are a rock band from the North of England. Blending the emotionally charged sound of the late ’90s Long Island punk rock scene with a distinctly British twist, FTTTF bring the genre up to date with an intense and energetic live show, laced with hooks, harmonies and anthemic melodies. The band took on the A-Z Questionnaire Challenge! Read their answers… 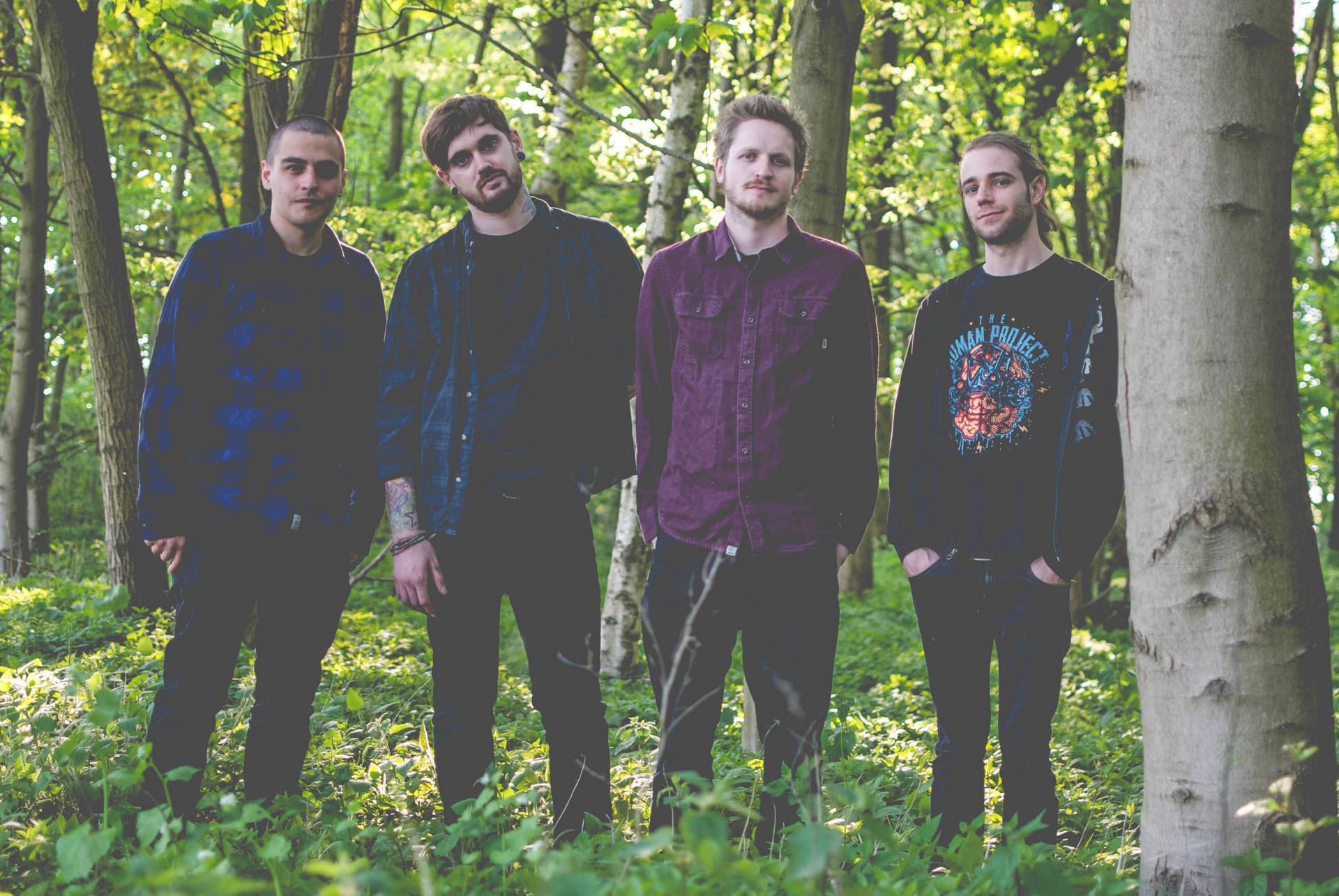 Feed Them To The Forest are a rock band from the North of England. Blending the emotionally charged sound of the late ’90s Long Island punk rock scene with a distinctly British twist, FTTTF bring the genre up to date with an intense and energetic live show, laced with hooks, harmonies and anthemic melodies. The band took on the A-Z Questionnaire Challenge! Read their answers…

Elliot -­ Super hard to actually work this out. Possibly something from ‘Smash’ by The Offspring, simply as hearing that record opened my ears to a whole new world of music and the fact that bands are just made up of regular people.

Mike – Any song by Less Than Jake

Lee – ‘Paranoid’ by Black Sabbath. Me and two friends learnt it for a school gig – That was when the bug hit me

Martin – In my old band we played a show in Germany and the promoter laid on this huge buffet for us to share with Belvedere. There was nothing special about the food itself but the conversations were hilarious and it’s one of the best ‘pre­show’ times I’ve had

Mike – One time, on the drive home from a show, we rocked up at KFC two minutes before closing and they gave us two whole bags of chicken for free.

Elliot – Motley Crue have got nothing on us

Elliot -­ Probably something from ‘Six Seasons and a Movie’. Its intentionally written to sound like a break up song, but it’s actually about losing touch with old friends. I really like the line ‘I want my memories back’

Martin – I like ‘And I feel like a pact made with god, by an atheist in times of crisis’ from ‘The Kids Need New Shoes’

Martin – I’d say ‘P.A.R.T.Why?’ – I had a few of the parts separately, but that keep together pretty much within one jam session

Lee – Wasn’t necessarily the easiest, but ‘Black Canary’ is probably the quickest we’ve put together a song.

Elliot – I’d say ‘Black Canary’. That just came together like a dream.

Martin – My favourite song is probably ‘Six Seasons and a Movie’, but I have the most fun playing ‘The Kids Need New Shoes’

Elliot ­- At the moment it’s probably the newest song we play, that doesn’t even have a name yet – that’s how new it is!

Martin – I’d really want to have someone from another genre – Someone like Ed Sheeran, or maybe even Eminem

Lee – The girl from Black Box – ‘Ride on time’ was excellent.

Elliot -­ Getting people to listen to your band ­ the internet is both a blessing and a curse because it opens up communication but it’s also so over saturated with people pushing new music.

Mike – Yeah, promotion – You have to spend as much time (if not more) promoting as you do writing / recording.

Martin – Also, in his attempt to be less metal, Lee bought a Slipknot signature guitar

Elliot – Absolutely mean everything you say and do. Also, don’t write shit songs.

Martin – Patience. Sometimes it comes quickly, sometimes it doesn’t. Rushing things and pushing it just for the sake of having another song never leads to results on par with experimenting and building up ideas naturally

Most inspiring musician you’ve ever experienced?

Lee – When I was 14, I saw Whitmore bring their own gear on stage – that made me realise that real people could actually make music.

Martin – Nuno from Extreme – my mum showed me videos of him when I was very young and he’s essentially the reason I started playing guitar. Even then, I could tell he was incredibly skilled and possessed this relaxed, fluid style of playing – it’s something that has stayed with me

Elliot ­- Springsteen at the Etihad a few years back. It’s like a religious experience watching one of his shows. Huge arena show to thousands of people and he still manages to make it feel super intense and intimate.

Elliot -­ I’m not even sure how ‘new’ they are but I think Dearist are absolutely killing it right now.

Martin – Larrakia for sure

Lee – Muse, there’d be LOADS of people there

Elliot – Say Anything would be awesome. I’ve gotta go for Taking Back Sunday though!

Elliot ­- I wanna do the East Coast of America.

Martin – The US and Canada

Elliot – ‘Ain’t no party like an S Club party’

Elliot -­ Black Canary is actually the title of an old episode of ‘Jonathan Creek’. I LOVE that show so much and always wanted to reference it – the actual episode is a Christmas Special and therefore not one of the best, I just thought it sounded cool as a song title. I didn’t even know about the ‘Black Canary’ comic books until we’d already recorded the song!

Lee – Venues up and down the U.K in October / November

Martin – We’re doing some studio Live Sessions with Dave Boothroyd, who produced our new single, at the end of the month. So, on YouTube, soon!

The old days of music were better than those current, do you agree?

Lee – No – the old music still exists, just listen to it.

Elliot ­- Yes and No. It’s impossible to quantify because a lot of our opinion of the ‘old days’ are skewed by nostalgia and rose tinted glasses. Saying that, I’m probably a fan of more bands that are now defunct than I am of any current acts.

Mike – I’d say that nostalgia always wins – older music will always take you back to a time in your life. But the days we are living now will have the same effect in a few years. Music is awesome any time

Martin -­ Not at all, they were just different. The Internet has turned the whole system on its head, and there’s a lot of people scrabbling to try find a new model which is profitable. There does seem to be more potential for small labels and independent artists to break through which is encouraging. In terms of the quality of music being produced by artists, I don’t think it’s any different, the spectrum of what is available has broadened but I think there’s just as much creative and original music being put out as there ever was.

Elliot – We should get a range of hoodies with Mikes dog on.

Elliot ­ I’m all about pomp and grandiose (and thinking I’m more important than I am), so I’d like to do the whole full orchestra thing, make every song sound like an epic movie score

Martin – ‘The Kids Need New Shoes’ with a symphony orchestra would be amazing!

Lee – I’d like to just do boy band versions of everything, that way we don’t have to get a bigger van

Lee -­ If anyone takes the time to support you, that’s awesome. Those people are the best

Elliot – Yeah, if someone is taking the time out of their day to engage with what you’re doing, that’s an amazing thing. The idea that someone is listening to your songs, or watching your videos for no other reason than that they connect with them on some level, that’s just incredible.

X­rays or any other treatments needed for band related injuries?

Elliot -­ It’s not unlikely that I’ve not performed an idiot check and therefore we have to double back on ourselves to collect equipment.

Martin – Elliot has normally forgotten something

Mike – If he hasn’t forgotten something, Elliot has probably given terrible driving instructions

Lee – Or I probably got lost

Elliot – It’s not one that would spring to mind when you think of classic ‘zoo’ animals, but I’m gonna say an otter. Those dudes float on their back and eat of their stomachs. I’ve got nothing but respect for that!