Epsilon take on the A-Z challenge!

Following the release of their latest single Cured, we asked South Wales’ latest metal export Epsilon to take on our A-Z challenge! A song that made you want to make music? For me (Elliot) It has to be Karma by Parkway Drive. They were one of the first bands I got into but also one of the first […] 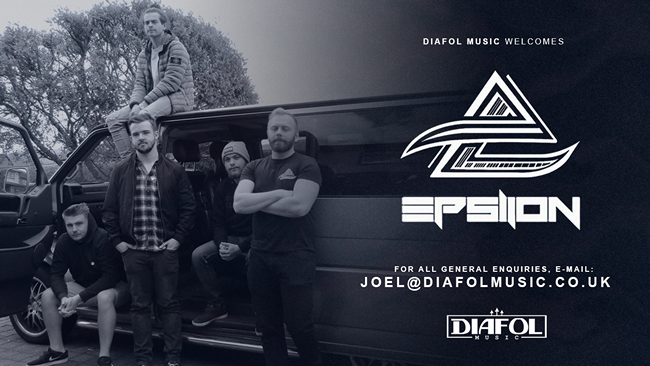 Following the release of their latest single Cured, we asked South Wales’ latest metal export Epsilon to take on our A-Z challenge!

For me (Elliot) It has to be Karma by Parkway Drive. They were one of the first bands I got into but also one of the first songs we covered as a band when it was just Jordan, David and Elliot in the band.

One of the craziest experiences we have had is having a pack out show at our headliner we done this year. We had people coming onto stage and just going nuts to our music which we absolutely loved!

Each lyric of each song has a deeper meaning, but it would be unfair to single-out particular lyrics as they all have an equal meaning.

the easiest song we wrote is one off our first E.P ‘V’ called Intertwine. our music now is a HUGE step up from that.

Our favourite song at the moment would be the newest song in our set Missouri. It’s completely different to the rest of our songs and really shows off the diversity we are capable of. It brings a softer and more emotional side to our music compared to the heavier and hard hitting songs we have.

We would love our good friend Luke Powell for a local band called ‘Mudlark’ he’s an amazing vocalist as well as the band themselves being amazing.

Money is probably the hardest thing about being in a band. Trying to juggle bills and other commitments in our personal lives and then trying to put money into the band is difficult but we always find a way!

Our guitarist Jordan once completely snapped his arm in an arm wrestle which then resulted in him having surgery and nearly dying during the surgery from cardiac arrest! However brutal this sounds, it acts as a blessing in disguise because during his recovery he decided to pick his guitar back up (after a certain period of healing) and possibly wouldn’t be in a band today if it hadn’t have happened.

Although we love to have a laugh, we don’t have any specific ongoing jokes.

We always want to make sure our songs don’t get boring at any point and also to add something different into our music. We also like to add a few surprises in there.

We are yet to play out of Wales, we have plans to tour throughout the UK during 2018 which is being organised through our manager over at Diafol Music. We are very excited to get out there and show more people our music.

This is a hard question as we all have different tastes in music. For our vocalist Josh it would be Travis Scott as he is really into his rap and trap. For Jordan and Dave, it would have to be Red Hot Chili Peppers, for Elliot it would be Parkway Drive/Architects and for Elis, Periphery.

MUDLARK from our home town Caerphilly.

MUDLARK. As they are our good friends, we would always help them out even if that meant opening a show for them. They deserve all the support they can get.

We would love to tour Europe!

Unsure for this one.

One reason is to show people that we have really stepped our game up and are serious about being big players in the UK metal scene. Secondly, black box comes from what planes have on board where it stores all the information, for us the album is venting out problems in our personal lives and how we have dealt with them and also stories about us growing up through our teenage years, thus storing them in a ‘black box’.

You can catch us live at Fuel rock club Cardiff on the 26th January supporting ivory fire.

Yes and no. There are bands, musicians and songs from the past that completely changed music and a lot of music now days may not be about if these musicians didn’t do something different. But on the other hand music today is amazing there is so much variety and so many different genres you can listen to it’s almost endless!

Nothing unusual as of yet however we have new merch being released along with our music video for Cured which promises to be different from your usual band merch.

I feel we already have a wide variety of writing songs and the songs already written are all different from each other, but we will always find some new to put into our sound.

They mean everything to us, the fact that people take time out of their day to listen to our music or come watch us live is amazing. All we want to do as a band is create great music that we love and that people will love. We also love to hear what people think about our music.

Our first show we ever played as a band in Swansea at the lemon factory our bassist dave was in a pit whilst one of the bands were on and go pushed into the P.A and broke his ribs! Fair play he still went on and played a set!

ummm it’s something we have never really thought about before but it would have to be a lion as we are ferocious in our drive to get to where we want with this band.