Besides their growing stock on the live circuit, the Brit rocksters have also secured widespread national press attention with Powerplay Magazine and Big Cheese for their sophomore EP ‘Where We Once Begun’, which was produced by Phil Gornell. The Southampton rockers took on the A-Z Challenge and below are their answers… 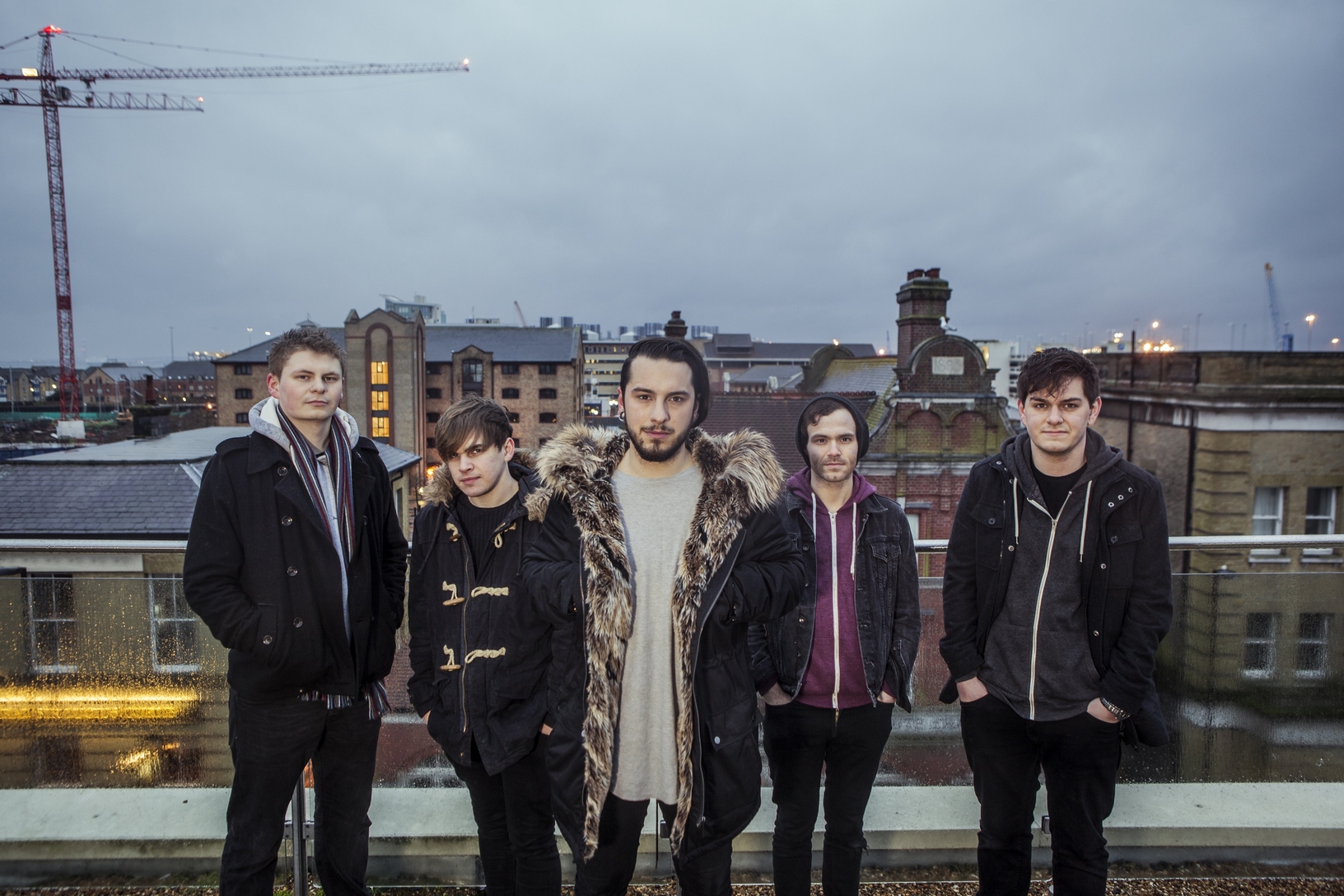 Born in Southampton and formed at the end of 2013, Elements feature Graham Rogers (Lead Vocals), Ollie Butler (Guitar and Backing Vocals), Robin Small(Guitar), Max Bakker (Bass and Backing Vocals) and Ash Martin (Drums). Their compelling and powerful live show has seen the band earn prestigious support slots with Bad Rabbits, DEAD!, AshesToAngels and Public Service Broadcasting, as well as touring across the country with They Say Fall, Elessar, As December Falls and You Know The Drill.

Coming at you with a groove paralleled to early Biffy Clyro merged with the engrossing rock vibes of Paramore and the innovation of Don Broco, Elements continue their climb with the release of their new single Make It Out Alive, which is pulled from their current EP Where We Once Begun, out now.

Besides their growing stock on the live circuit, the Brit rocksters have also secured widespread national press attention with Powerplay Magazine and Big Cheese for their sophomore EP ‘Where We Once Begun’, which was produced by Phil Gornell (While She Sleeps, Bring Me The Horizon). Elements plucked the single ‘Shaman’

We actually answered all of the questions then came back to this one, it’s hard to pin down an individual song as we have all been influenced by so and many artists. Definitely songs from The Black Parade and a lot of early Fall Out Boy, Under The Cork Tree is a band favourite!

Mostly we’ve just been given beer at shows – which, to be honest, is pretty great as is!

When we went down to Sheffield to record our EP last year, we got to our crappy little hotel about 1am and went to find a petrol station just to get some beers. We were out walking for maybe 10 minutes and then we just randomly found a car on fire – police cars and fire engines were already on the way, so we left quite quick! Another good one was when we were on our first tour about to get some food, and some guy just came along, grabbed a seagull and yelled “DINNER!” and then ran down an alley. Completely out of nowhere. We never did find out what happened to it…

Probably have to go for our new single ‘Make It Out Alive’, in the chorus. There’s the main line which goes “Stop me/because we/wont make it out alive” and a counter-melody going “I need something to help me move on, I need something that I rely on”. The whole track is about being trapped in a place where you don’t want to be and trying to figure out how to get out of it, and those two distinct lines just work together so well. We’re really proud of them.

The easiest song we wrote was probably our first proper single, ‘Shaman’. The whole thing came together in roughly a whole practice and even after demoing and through the recording process, it hasn’t changed that much – which is probably a sign we’re doing something right?

For most of us it’s our punk-y sorta track, ‘High Time For Being Free’ – it’s a really easy song to get you going for a set. It’s fast and heavy and just gets you pumped, so we love to open with it. It’s a short and sweet track with a really memorable chorus, that we find gets the audience going as well.

If we were thinking big we would say Rou Reynolds from Enter Shikari, which would be a dream come true! (Especially for Robin, who hearts him.)
But if we’re being more realistic, it’d be Alex Mountford from DEAD who are pals of ours – we’ve played with them a fair few times and we’ve got a good history together. They’re also awesome, and everyone should go listen to them right now.

Balancing the real world alongside what you actually want to do (IE: trying to be in a band). If someone could make a special extra day of the week just for banding, that’d be great.

Here’s five:
1:) Graham has ‘yolo’ tattooed on his butt.
2.) Max was in an x-factor music video last year.
3.) Ash was sent on a quest for religious enlightenment once… the results are still pending.
4.) Robin does all the design work for Elements – we have NEVER outsourced for graphic work.
5.) Ollie used to be some kind of chess champion, though is now only a part-time nerd.

SAIL. We do a cover of AWOLnation’s ‘Sail’, and quite often we’ll throw things/flip each other out of bed on tour while yelling the title.
Also, soap face – but to know about that, you’ll need to ask Max.

Time and good vibes. You just can’t get anything done if you bring bad energy into a room or someone’s in a bad mood, it just stifles the process. What’s also massively helpful is actually having a proper space to write in – we find that as a band we write best in a rehearsal room with all our gear there where we don’t have to worry about being too loud.
And of course, obviously, a hook helps. With no hook, you’ve got no chance.

So far, it would be the show we did in Manchester – that the furthest North we’ve been.
And also on our upcoming July tour, we’re going allll the way to Leeds from Southampton (where we’re based)! Which is gonna be one helluva drive.

Ollie Butler. He’s just great. (Are we allowed to include members of our own band?)

We’d definitely recommend a band from Gainsborough called ‘They Say Fall’, whom we met on our most recent tour and we just massively hit it off with. Awesome guys with a great sense of humour, and great music.

Enter Shikari or Don Broco – two bands that we admire quite a lot in terms of attitude as well as stylistically. Combined, they’re probably the biggest influences on us as a band collectively.

We’d love to hit up some dates abroad, hopefully next year. Do some European dates – maybe in France or Italy? The possibilities are endless!

“Don’t settle for cake when you could have gateau” – Ash Martin, 2016.
So that’s just some off the cuff advice from our drummer that we thought we should just include!
But maybe you could quote us from one of our songs? Let’s go with lyrics from ‘Shaman’; “it’s times like these I’ve got a chance/to find out who I really am” just because it’s a good couple of lines about how you’ve always got time to find out who you are and that it’s never too late.

The easy answer is that it’s the title of the song.
The hard answer, is that there isn’t one…

We have an upcoming tour this July! Your best chance to catch us would be at our Southampton show, as it’ll be our biggest one and we can get to do more cool things as it’s a hometown show.
For a full run down of the tour:
July 11th – Bristol
July 12th – Newcastle
July 13th – Birmingham
July 14th – London
July 15th – Southampton
July 16th – Leeds

Meh. It’s hard for us to compare really – we are a new band, we’ve always inhabited this time in music so this is how we’ve learnt how to do things. You hear all sorts about how things used to be ‘easier’, and that might be true, but it doesn’t matter to us now because it’s in the past and it’s not something we’ll experience.

Coming soon to an online store near you, MAX BAKKER BOBBLEHEADS!
Seriously though, hopefully soon we will have a limited run of our special Elements ‘origin story’ comic book.

We have a very old song called ‘Elevation’ that we really, reaaally want to rework for the band. It was written before our current line up was solidified so we don’t even have a proper version of it to put out at the moment. So we’d really like to maybe get that done for the next EP and finally show it to the world in a more official way.

To us they mean validation for what we do. The hardest part about being in a band is essentially having a supply and needing to create a demand. Actually having people sing your lyrics back to you when you’re playing, and coming up to you after a show to tell you that ‘you rock’ is one of the most reassuring things you can experience as a band. It shows you that it’s not all for naught. So, the short answer would be – everything.

Graham did punch through a floor tom once and need to go to A&E. He also fell through a trampoline and sprained both ankles. He also gets ill a lot on tour.
I guess you can say we have a lot of Graham-related incidents. Thus leading to his special alter-ego, ‘Safety Graham’.

It’s probably best not to name names.
But it’s Ash.

Some kind of hyperactive, ADHD riddled, yet still somehow sleepy, creature. Let’s go with a platypus. Why not. Is it a duck? Is it a beaver? Who knows.