Yorkshire alt-rockers As Sirens Fall returned to Download this year to entertain the RIP campers on the Wednesday night following a sold-out show in Leeds. We caught up with vocalist (or as he says; song and dance man) Mikey Lord and bassist Jason Doveston to chat new music, tiny venues and how vampires do not […] 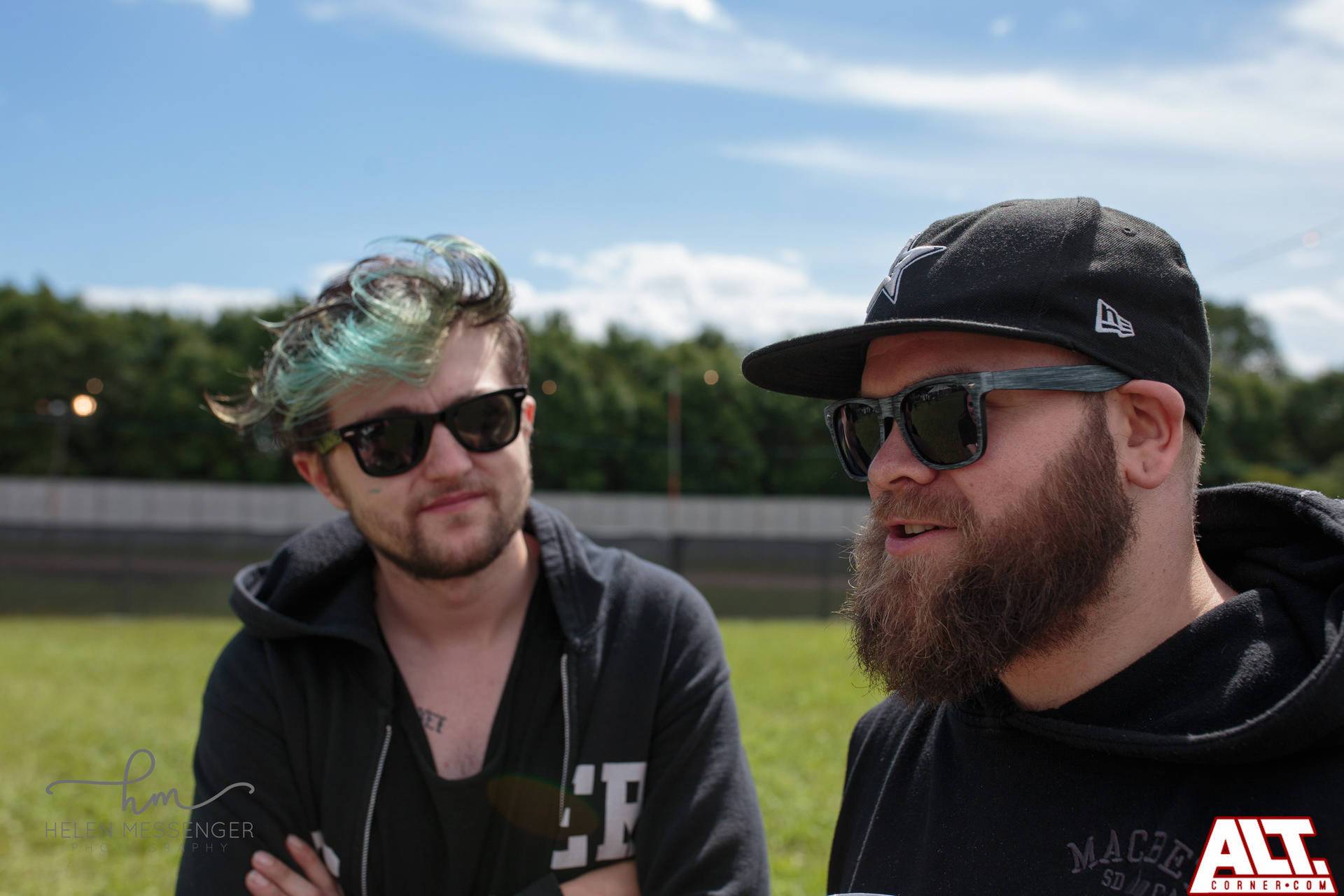 Yorkshire alt-rockers As Sirens Fall returned to Download this year to entertain the RIP campers on the Wednesday night following a sold-out show in Leeds. We caught up with vocalist (or as he says; song and dance man) Mikey Lord and bassist Jason Doveston to chat new music, tiny venues and how vampires do not sparkle!

You’re at Download! Are you excited to be back?

Mikey: Absolutely! 100% Massively! It’s wonderful! It’s been an amazing weekend so far and it’s only Friday!

It’s the first day for everybody else but you’ve been here since Wednesday to perform for the RIP campers, how was that?

Mikey: It was awesome, absolutely awesome. Rammed the room out and it was quite a chilled out affair. It’s RIP camping so people are quite chilled out and relaxed, especially as it was only Wednesday and people are just arriving but by the end of the show, everyone was on their feet, dancing and singing along and it was awesome. Absolutely awesome!

That’s good! Is there anyone you’re looking forward to seeing?

Jason: AFI for me. I last saw them in 2009 at Leeds festival in the NME tent and they don’t tour the UK a lot so it’s pretty special to be able to see AFI!

They’re both going to be really good sets! You played a show with Courage My Love in Leeds on Tuesday, how was that for you?

Mikey: It was amazing! It was awesome! It’s been a while since we’ve played a local show. We did a tour over Christmas and then headlined a festival in Leeds in April and after that, we’ve been pretty quiet locally so it was col to come back and play Santiago’s which was where the first show we played and there was a crowd there that actually gave a four letter word…

You can swear its fine.

Mikey: Yeah? Fuck yes! So it was cool to come back there as well and the crowd actually knew who we were as well. We were main support and it was awesome because we haven’t been back for a while and everyone was really excited to see us. It was a really fun show!

Jason: I’ll give you an idea of what that rooms like, you have to get the crowd to pass the drum kit to the front of the room.

Mikey: It’s like parting the red sea! Maximum width is like 8 people across the room. It’s tiny!

Jason: There were 100 people there and it sold out, it was mad!

You released EP The Hospital Party last year, which was an incredible record, are you currently working on a follow up?

Jason: Can I tell you something really interesting? We’ve never played in Wales right, but we do all our recording in Wales. I don’t know if you’ve heard of Romesh Dodangoda? He records all of our stuff. We go out there, we go to Clwb (Ifor Bach), Fuel, Team Up (Bunker club night) (conversation turns to nights out in Cardiff). So yeah let’s cut to the point. We’ve made a new record in Wales in January so it’s really exciting. (To Mikey) if you want to take it away on the record?

Mikey: It’s a cool follow-up in that it’s quite different. It’s not that we’re stepping away from anything, we’ve always been quite diverse in the music that we do. With The Hospital Party you could pick and choose songs off it and if you didn’t listen to the whole thing as a whole, it could sound like different bands. We really like that because it gives us the opportunity to explore a song.

It’s good because it means that it isn’t repetitive or boring.

Mikey: Totally but its also super, super fun to tour! You can almost change your personality form song to song. This EP is essentially more of that but us being quite a bit more adventurous and there’s a lot more to this release than just the music as well! We’re working on some very, very cool experiences that will go alongside it. It’s going to be epic, it’ll be long-winded and it’s going to be beautiful. It’s bringing back the idea that it’s not just music, its art in its simplest form so there’s a lot of visual stuff going on, a lot of audio stuff going on but also, if it comes off, quite a lot of experiential stuff as well. It’s going to be amazing! The reason being is that it’s still cooking, it’s still in the oven and I don’t wanna jinx it! I don’t wanna give our release food poisoning!

Jason: I would go so far to say as well though; it’s a difficult thing putting a record out there! It’s not as simple as just putting music out there. The music is done, I’ll 100% tell you that now! The record is finished, we could put it out tomorrow but it’s more than that to us. If you watch any of our music videos, you’ll know that we go as crazy as we can possibly go so I think this one’s going to be another step in that direction and hopefully the visual things to go along with it are going to deliver.

Nice. Is there any idea of a release date? Is it going to be before the end of this year?

Mikey: We’ll see! There’s some things connected to this EP that are going to be coming sooner than it and it’s a matter of when those are ready to go and once we know about that then we can start thinking about releasing the whole thing. It’s not a long time!

Jason: I’d say that the lead single actually has a feature on from a vocalist of a Welsh band funnily enough who played Download on one of the major stages last year, I’ll let you speculate as to who it might be. For us, we have to make that work in a video format as well as a music format so we’ll have to see what happens from there!

Mikey: We’ve got a few dates at the end of June. It’s a tour with a band that we’re really good friends with that is yet to be announced, it’s still sort of being organised. It’s going to be really, really fun and when we announce it, we’ll know more about the cities and the dates and stuff. But it’s cities that we haven’t played before which is really exciting obviously! Like Cardiff, it’ll be really exciting to go to the place where we make all the music and actually play it!

Jason: And a return to London which I can’t wait for! We played our first sold-out show in London in December and we haven’t been back since, so that’ll be great!

There’s a punk goes pop album coming out soon, if As Sirens Fall could cover one current chart song, what would it be?

Mikey: When was the last time we listened to anything but Radio 4 Jason?

Jason: Do you know what? I love Radio 2 actually! I’m gonna go with anything by Little Mix because God those hooks!

Jason: I don’t know if you watched the One Love Manchester concert but the harmonies! Nobody else could do that! Wow! They’re just incredible! Although, I will say as well I am loving the new single from Miley Cyrus. I think she’s horrendous, I’ll be honest, her pop songs, I hated but this new one is just; Miley, if you’re listening, keep doing that!

Mikey: I love her! The other thing that’s in the charts right now is Harry Styles’ new record. That is amazing! I’d do anything off that record!

We always end with some random questions; would you rather be the author of the Twilight saga or have written every Justin Bieber song in history?

Jason: Justin Bieber all the way! Especially after Manchester. You know what? I hated him and at Manchester, he came out with that guitar and he just sang. For me, I just thought “do you know what? You’ve just earned respect man” it was just class! He just stood there with a guitar and sang for people and he just left all the bullshit behind. That was amazing. The Twilight Saga? Ugh no thanks!

Mikey: Vampires have always been like my favourite thing in the world and the Twilight Saga was made and that was the worst thing ever, it sucks.

Mikey: My Chem wrote a fucking song Vampire Money about it.

Mikey: Listen to our music, have a wonderful weekend, come see us at a show because we always bring the boogie! And all the love in the world!

Jason: Yeah, https://assirensfall.co.uk and all that!

Mikey: Thank you so much!

Check out As Sirens Fall on social media: