The Raven Age headed to Download following the Kerrang premiere of new single The Dying Embers Of Life. We caught up with Michael Burrough, frontman of the London based metallers, to chat Download, debut album Darkness Will Rise, getting arrested for stealing his own car and singing along to Blue on the tour bus. You’re […] 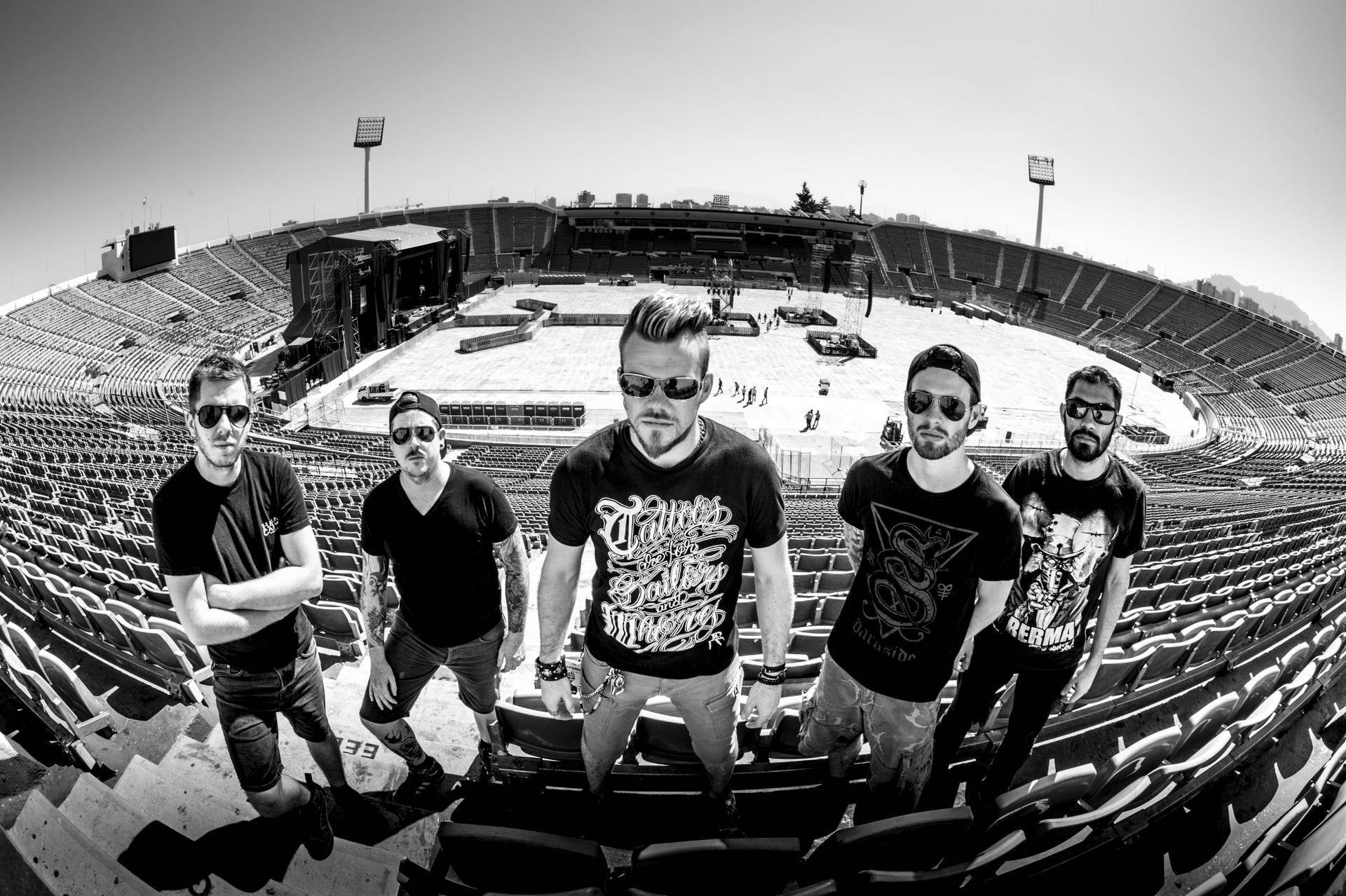 The Raven Age headed to Download following the Kerrang premiere of new single The Dying Embers Of Life. We caught up with Michael Burrough, frontman of the London based metallers, to chat Download, debut album Darkness Will Rise, getting arrested for stealing his own car and singing along to Blue on the tour bus.

Yes! Every time. It doesn’t get any less exciting, especially when you get to play the second stage which is kinda nuts!

You played earlier on, how was your set?

It was great, it was fun! We had a good turn out, a couple of tech issues here and there but the crowd seemed to love it. I have no complaints!

I do. To be honest, I’m useless when it comes to actually looking at line ups and doing anything I should. I really, really wanted to see Rammstein but we weren’t in the right place and it got evacuated anyway when we were over at Rock Am Ring, that was bad but I just want to get Five Finger down and just chill out and just hang out.

That’s fair. You recently released your debut album Darkness Will Rise back in March, how has the reaction been towards it? It’s a great record!

Thank you! It’s been pretty good! We can’t really argue! It’s always nice when you put up a new video or something on Facebook and people go “love the album! – Brisbane” or “Tokyo” you know? All these people saw us live on the Maiden tour and they’re actually sticking by and enjoying and to watch your name get bigger on the Download poster is something else! It’s a really good feeling!

I bet it is! You premiered your new single The Dying Embers Of Life on Kerrang a few days ago, it’s really melodic and a great track, can you tell us a bit about the inspiration behind it?

Yeah. To be honest with you, obviously it was written by George (Harris, guitar) and Dan (Wright, guitar) I think had a lot to do with it as well. I always had it in my brain that it was really about a book that George read once about a prisoner from Alcatraz, he sees the city from the shoreline kinda thing, that’s the vibe it got. Obviously the video’s a bit different from that as well, We try as much as possible to not tell people what things are about because I and the rest of the guys are a firm believer in making your own interpretation of things. A good example of that is a band who’s name just totally eluded me with Drown, who sings Drown? Well when I actually read the lyrics, they weren’t as I thought they were and the song meant more to me when it was wrong. Bring Me The Horizon that’s who it was! So I think it’s much better to just listen to a song, decide whether you like it or not and interpret it in your own realm. Obviously you have videos and stuff which lead people some of the way but I think the best thing to do is interpret it as you want.

Well this is the third gig of the festival run, we were in Germany last weekend for Rock In Park and Rock Am Ring which went phenomenally well and today went well. We leave at about midday tomorrow and then Sunday we’re playing with Gojira and we’re kinda hopping on some festivals and between those we’re playing club gigs with Gojira and Anthrax who we’ve just finished a tour with so it’ll be great to see those guys again. Wicked guys, always full of helpful information and caring about each other and just being cool. I’d say there’s honestly more bands that are like that than not but it means that when you do meet a band that aren’t as open and forthcoming, you just feel like they’re worse than they actually are when really they just want to chill out and relax. So yeah we’re going to do the rest of the festival run, maybe another holiday and then hopefully either get on the back of a tour with another band or maybe do our own at some point. That’s going to happen at some point if we can obviously fill the venues, hopefully one day!

I’m pretty sure you will! There’s a new Punk Goes Pop album coming out soon, if The Raven Age were going to cover a current pop song, what would it be?

This might come as some kind of surprise but there’s an Ellie Goulding song that I can’t remember the name of but the bassline in it, every time I hear it, I just think it’d be a brutal metal song. So one of the Ellie Goulding tracks, it’s not Burn, maybe it is Burn (or maybe Love Me Like You Do). Also I’ve always wanted to do a metal cover of Wham!’s Club Tropicana! It’s like the most amazing jam and really weird and questionable at the same time. I sometimes slap that on in the dressing room after a show to wind the guys up. Club Tropicana drinks are free, they’re like “what the hell? We’re in a metal band, what are you doing?” We actually listened to a load of Blue last night on the tour bus, can you believe that? Blue! And all tried to hit the high notes and stuff but we all failed!

That’s interesting! We always end with some random questions; if you were in a boy band, which would you be in?

(Laughs) worst question ever! The Raven Age because we’re a boyband! Well, it really upsets people but when I was a lot younger, there was a lot of Backstreet Boys going on and I used to have a centre parting so people used to compare me to Nick Carter all the time so I guess I’d have to say that. But I’d like to be in Take That I think just to absolutely troll Gary Barlow and Robbie Williams just for fun. Nah I think I’d have to go for Backstreet Boys.

Fair. Have you ever been in trouble with the law?

Yes. Recently actually, Metal Hammer have just posted this slight article and it’s kinda funny because the tagline is ‘I got arrested for stealing my own car’. Don’t ask me how that happens right?! I wasn’t actually driving, I didn’t steal the car. Basically someone had broke into my house, stolen my car keys and then a month later my car disappeared off the drive. So I phoned the police thinking “yeah they’re gonna catch them, this is going to be great”, the police show up, the car is crashed into a neighbours car about 100 yards down the road and I don’t know whether they thought it was an insurance job or what and mostly my run-ins with the police have been very good and they’ve been very nice people but in this particular case, so many cars to a small town, they had to arrest someone and they decided to arrest me. I spent a night in the cell for crashing a car that was my own that I wasn’t driving. So yes I’ve been in trouble with the law other than bare knuckle fist fights to the death which we can’t really talk about. I don’t tend to get angry or have any altercations that result in that but if anyone messes with my friends, especially helpless friends or friends that are already ill and have a terminal disease, I don’t sit so well with that you know. I kinda throw a few punches and end up in jail for a night.

It’s really current so it touches a bit of a cord but I’d probably have to say Chris Cornell (Soundgarden and Audioslave) because its tragic and it sucks to me that we grew up in an era where there were so many up and coming people like Kurt Cobain and stuff like that, he would be a wicked one to bring back, but to be honest the 27 club and all the mystery around that. Chris Cornell lived it, went through it, what 52 years old or something like that? And it just sucks that depression is a big thing but it is what it is. Vocal wise, I think he’s awesome! I’m not claiming to be the hugest Soundgarden or Audioslave fan or anything like that but really, him on his own as a vocalist was just tip-top, absolutely loved it!

That’s fair, finally is there anything else you want to say to our readers?

Yeah, go out and buy the album, check us out. If you don’t like it, you don’t have to listen to it. You’ve expended a small amount of cash and you never have to listen to us again but just check it out it’s something different, we’ve got heavy music with melodic vocals to sort of attract the people who go “I don’t like scream vocals” because there’s a lot of those. Check us out, come see us. If you ever see us in public, come and say hi because we’re very approachable and we love to hear your feedback.

Thanks for speaking to us today, we’ll let you run off now to go and see Five Finger Death Punch.