The first time we spoke to Swedish rockers Normandie was on their first visit to the UK last year where we spoke to vocalist Philip Strand and drummer Jesper Malmberg. Now, just under 12 months on, we catch up with Philip, Jesper and guitarist Håkan Almbladh to talk touring, Download, the meaning behind latest single […] 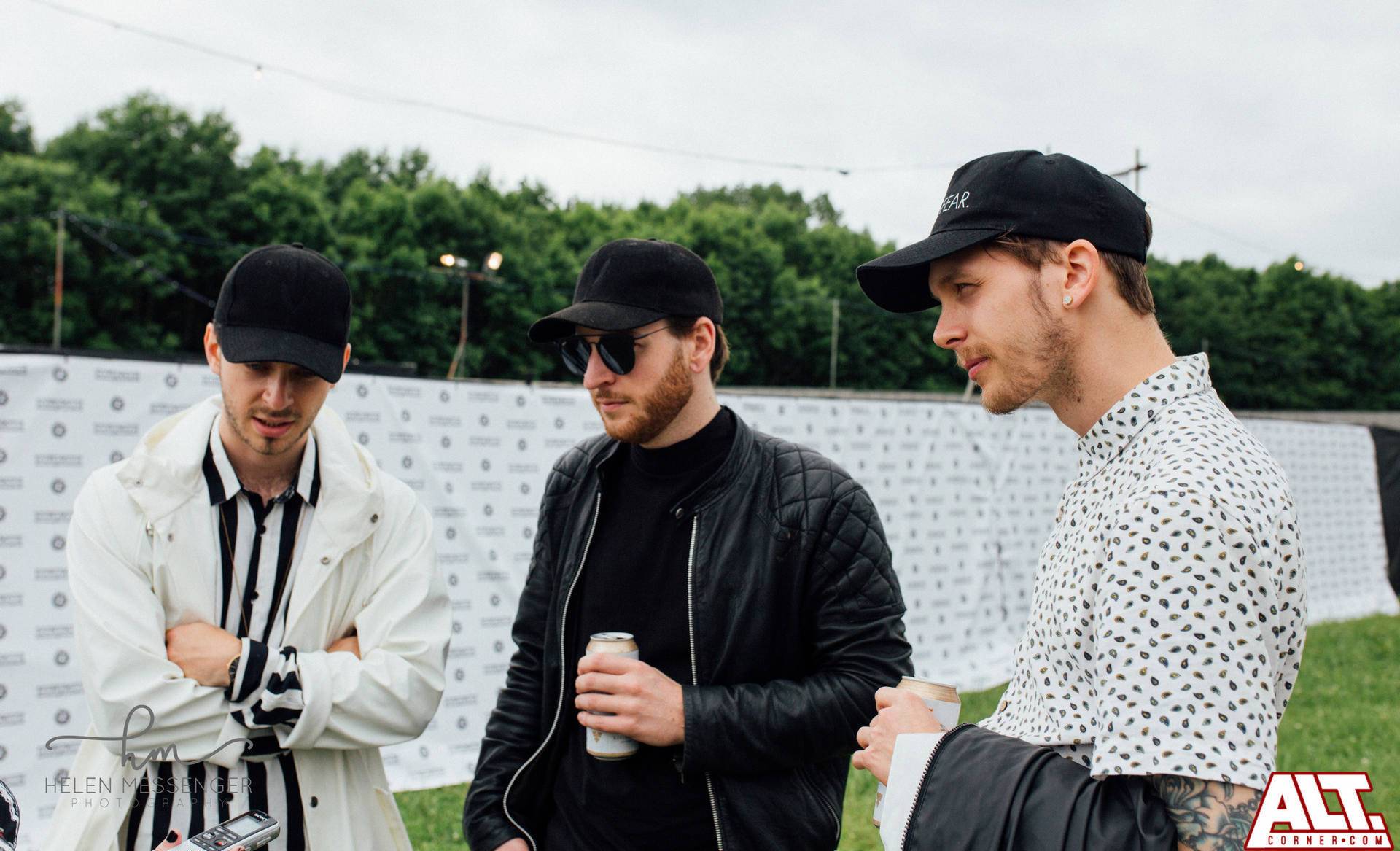 The first time we spoke to Swedish rockers Normandie was on their first visit to the UK last year where we spoke to vocalist Philip Strand and drummer Jesper Malmberg. Now, just under 12 months on, we catch up with Philip, Jesper and guitarist Håkan Almbladh to talk touring, Download, the meaning behind latest single Ghost and Nickelback.

You opened up the Avalanche stage today, I caught most of your set and you sounded great! How did you think your set went?

Philip: Surprisingly good from the audience side. We weren’t expecting the tent to fill up that well!

Håkan: Not that early!

Philip: People had a rough night yesterday, it’s not that often the UK gets a bit of sun so I guess people got smashed last night.

Philip: Of course you did! But yeah it rocked!

Jesper: It was a good show!

The crowd were really into it. Are you looking forward to seeing anybody over the weekend?

Philip: Oh yeah, a few bands! Biffy is on the top of my list.

Philip: Oh yeah Steel Panther tomorrow. We are actually staying one more day just to see Steel Panther and a bit of Aerosmith as well!

You have to see Steel Panther if you can!

Philip: Yeah, the vocalist has one of the best vocals around.

Jesper: They could change some lyrics but… Other than that, they sound cool!

This is your third time in the UK are you excited to be back in the UK and do you have any plans for another tour over here?

Philip: Always! We’re coming back for Fort Fest. I think we’re co-headlining and we want to do another tour! Maybe not headlining, we want to be a support slot for a UK band or a band coming over to the UK because we love those venues! I mean the Ritz and all the O2’s I just love everything about it! There seems to be some history behind every venue we played on the last tour we did with Yellowcard.

That’s awesome! You recently released the video for Ghost, its an awesome track! Can you tell us a bit about the inspiration behind it?

Philip: Thank you! It’s quite simple but also not that simple. It’s about my experience with depression a few years ago.

Jesper: All of us, or at least me and Philip have been depressed, well not depressed, but anxious you know? It’s kinda about getting out of that place and how it feels to have anxiety and talk about it openly. We both feel better now.

Philip: It’s so weird to talk about anxiety because everyone has their own experience about it so it feels like I’m stepping on somebody’s toes in saying that I have been anxious because I don’t know if people have been way more anxious and I’ve just been seeing the tip of the iceberg. But yeah it’s about my experience with anxiety and basically the whole lyrics for the song is me talking to myself and trying to encourage myself to pick up the pieces and be whole again and towards the end of the song, I actually am whole again.

That’s a nice meaning behind it. You said you have Fort Fest coming up, have you got any other plans for 2017?

Philip: More singles is on our radar. It’s quite open, we didn’t have a label for Ghosts and it’s not like we’re looking for a label, we actually want to see where our fanbase is and how they’re enjoying the new tracks. So maybe one more single independently and we’ll see what labels we can hook up with, if we do.

Håkan: Maybe release on our own like we did with Ghosts because we have such a great PR company we work with that we don’t really need a label that bad and releasing Ghosts by ourselves felt great!

Jesper: A lot of bands are doing it now. While She Sleeps had a really big response from not releasing it (latest album You Are We) with a label and it’s not like we’re the same size as While She Sleeps but it connects you with the fans a little bit more when you’re doing it together with them so we’ll see if we can pull it off.

That’s cool. There’s a new Punk Goes Pop record coming out soon, if Normandie were going to cover a current pop song, what would it be?

Jesper: I would cover Post Malone Congratulations. (band break out into a snippet of it)

Philip: That’s the answer! It’s a cool song, we’ve actually been talking about it but it may not happen. That’s the main song I’d like to pick, like in Chandelier with Sia, you can sort of hear the influences coming from rock and it has a powerful chorus and if a song is that good that it fits every genre, then it’s the perfect song to cover I think!

Nice. We always end with some random questions; where has been the craziest place you’ve toured and why?

Håkan: I have to say Finland. Our first show outside of Sweden I think?

Håkan: It was just an unexpected good crowd, our second show ever!

Jesper: People were running around in the mosh pit with a broken arm!

Håkan: A guy with a cast on his leg by the stage. It’s crazy!

Philip: Szeged in Hungary is crazy. It’s a different part of the world but it’s a different society. People are into music, like they have one rock concert every month and everyone just goes nuts, even if they don’t know the band, they just come down and people stage dive all the time!

Nice! Would you rather only be able to listen to Nickelback songs or have to read all 52 pages of the iTunes terms and conditions every day for the rest of your life?

Philip: Nickelback for sure! (all agree).

Håkan: I actually enjoy I little bit of Nickelback.

Jesper: It’s a good question for sure but I think it’s more for the internet. If we stay true to the internet thing, maybe we should say iTunes.

One or two who’ve had the question have said Nickelback. Either one wouldn’t really bother me to be honest.

Philip: Nickelback sounds cool. I always enjoy Nickelback for their albums and songs, it’s so pure and it sounds so crispy. Even if the song is bad, a good mix can save a pretty crappy song.

That’s fair! It’s your last 24 hours on Earth, how would you spend it?

Jesper: I would spend it with my family.

Philip: If it comes down to me dying in 24 hours, I would be on a flight in the next 15 minutes I think.

Håkan: I would look at stuff.

Philip: You know the flight is just one hour to Stockholm?

Philip: So you wouldn’t see your dad or?

Håkan: No I mean I’ve seen them for 20 odd years (laughs)

Jesper: Knowing that you’re going to die I think would be quite a cool experience. I went too deep with that one.

Nice! Thanks for speaking to us today!