New Zealand (via the US) didgeridoo metallers Like A Storm return to Download two years after they made their debut, sub-headlining the same stage they opened on their first visit! We caught up with the band (brothers Kent, Chris and Matt Brooks and Zach Wood) ahead of their set to talk Download, new album Catacombs, […] 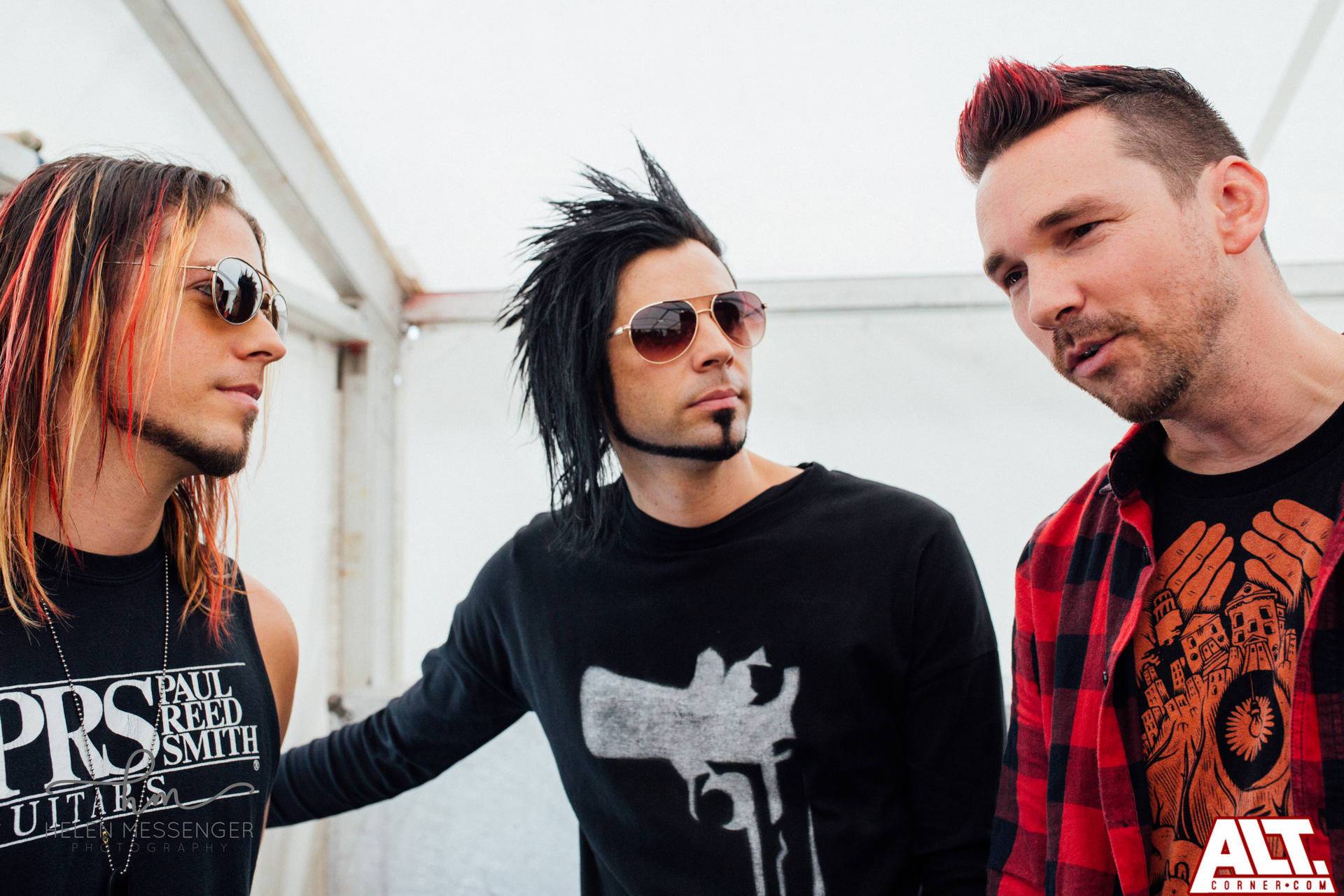 New Zealand (via the US) didgeridoo metallers Like A Storm return to Download two years after they made their debut, sub-headlining the same stage they opened on their first visit! We caught up with the band (brothers Kent, Chris and Matt Brooks and Zach Wood) ahead of their set to talk Download, new album Catacombs, Babymetal with an actual baby and they even help edit some future questions….

You’re back at Download! Are you excited to be here?

Kent (bass/vocals): We’re back! You’re back! We’re stoked to be back!

Matt (guitar/vocals): it’s such an epic festival man so to come back and do it a second time is really awesome!

That’s good! Two years ago, you opened up the Sunday on the Dogtooth stage and this year you’re sub-headlining the stage! How does that feel?

Chris (vocals/guitar/didgeridoo): It feels great, we get to sleep in a little. The last time we came here, we got up at like six am to be ready to play at 12 so playing later in the day is definitely much more civilised.

Matt: This time we have our mum and dad here. So that’ll be really cool, they came over to see us play.

Kent: Our dad’s from Coventry so we get a family reunion every time we come back.

Zach (drums): All of our dads are here! My dad’s here too! He’s British, he’s from Plymouth.

Matt: All of our English dads are here. We’ve got a home crowd!

That’s cool! Are there any bands you want to catch over the weekend? Alter Bridge are on not long after you guys, I’m guessing they’ll be one?

Chris: We definitely want to see them. Devilskin, they’re a band from New Zealand we’re all excited to see, Sick Puppies from Australia would be awesome to see!

Zach: It would be cool to see Steel Panther

Kent: There’s a little band called Aerosmith that I think once the crowd sees them, they’re really gonna take off…

They might get into them at some point yeah!

Matt: They might be able to get a career going.

For people who haven’t seen you live yet, what can they expect from a Like A Storm set?

Kent: High energy despite being jet lagged as hell!

Matt: Didgeridoo metal. That can either be two words or one word depending how fast you say it.

Chris: How well you can spell.

Matt: How well you can transcribe this interview. I think yeah a high energy show and heavy music with a didgeridoo, I think that’s a good start.

That’s fair, have you got any plans for a UK tour?

Kent: We ask our management and agent every single time we come and play Europe and the UK, we’re like “right when are we coming back?” because we just love it here since the first time we’ve come. I think it’s our fourth time now and we’re going to start working on some headline stuff. We’re working on a new record right now and once that’s done, we’ll come back!

Nice! How is the work on Catacombs going?

Chris: Have you got any ideas?

Kent: We were hoping you were going to come and help us out!

Matt: We’re just gonna pick random things you say and then turn them into songs!

Matt: It’s awesome, we just came from Vegas now, we’ve been tracking for the last week in the studio so it’s been really exciting to have these new ideas we’ve been working so hard on. So to hear them put down on tape as recorded songs coming together is really exciting!

Kent: It’s taken a while because when we were going to start writing and recording we got invited to do the tour with Alter Bridge, Gojira and Volbeat and we got offered a bunch of stuff in New Zealand, a tour of Australia, then we got offered this and some European festivals. You work your whole life to get those opportunities so you don’t wanna be like “nah we’re not gonna do any of that right now” you know? So it’s taken a little bit longer but I think it’ll be better for it because every time you come out and do something, you reconnect with playing live so you don’t get too into that isolated, sitting in your room writing music, you know what it’s like to play live and then you put that into the new songs.

Nice. Is there an estimated release date?

Kent: Well we’ve got Michael “Elvis” Baskette who did the Alter Bridge, Slash and Tremonti stuff and he’s going to be mixing it in September and then after that is when it turns into the business end that we don’t really have a lot to do with and just at a time that makes sense so we can get back here and play as many shows as possible.

Chris: Ask Santa for it for Christmas and maybe on Christmas day he’ll get it for you! Maybe a little reindeer will drop it on your roof.

Kent: Thank you, we can’t wait!

Yeah I love that!

Chris: It’s going to be more of that!

That’s going to be awesome! To celebrate the news of a new Punk Goes Pop record, if you could cover one current charting song, what would it be?

Kent: Currently charting? The only knew song really that I know is, I’ve got a one and a half year old daughter and she loves the song Try Everything by Shakira that’s on the Zootopia film. She’s one and that’s the first song she ever learnt how to sing, so maybe we’d do that and let her do lead vocals.

Matt: That would be really cool like Babymetal with an actual baby! (laughs)

Fair, if we flip the switch and you can have any one artist cover one Like A Storm song, who would you pick and what would they play?

Matt: Could it be Kent’s daughter?

Kent: Man I’ve honestly never, ever thought about that before. How much of an egomaniac would you have to be if you had an answer ready?

Matt: I’d like to hear William Shatner do a spoken word version of Pure Evil!

We always end with some random questions; what would be a good theme song for your life?

Matt: My Heart Will Go On by Celine Dion!

Chris: You got that one.

Zach: I got a speeding ticket. Does that count?

Kent: I’ve been in trouble with the law but I’ve never been arrested. I’ve just had a lot of stern telling offs. When I went to high school, it was a regular thing that at the house parties, the riot police would show up. Like every week! It wasn’t a party until the riot police showed up! So I’ve definitely had my fair share of run-ins but I’ve never, ever been arrested which helps when you start travelling because every country wants to know and you go “oh thank god!”

Zach: Live without a computer.

Kent: Yeah cause he’d just use his phone.

Chris: There’s a lot of ways around that one.

Zach: I’ll live without the internet.

Matt: I don’t know, we’ve been lucky, we’ve played probably half the world and we come from far away so… I don’t know! The first time we played Download was pretty insane, when we were here in 2015. We’ve played a lot of places and they’re all crazy in their own way cause everywhere you go, you’re seeing a part of the world for the first time. I feel like this question is more serious and less comedic than the other ones. I don’t know!

Chris: New Zealand was crazy because we hadn’t played there since we’ve been touring here and our 94 year old grandad was in the crowd and all our friends were just handing out backstage. We were playing with Alter Bridge who we’ve toured the US, Europe, UK and now New Zealand with so it’s just like another day on tour except that all our friends we grew up with were there so in an odd way, playing a home show was crazy!

That’s awesome. Finally, is there anything you want to say to our readers?

Chris: Thank you guys so much for all your support, thank you for writing about us, spreading the word.

Kent: We’ll be back as soon as we can! We always are!

Matt: Congratulations for knowing how to read! Zach’s been working on it for a while and he looks forward to reading your articles as soon as he learns how to read!