We caught up with Hacktivist bassist Josh Gurner following their Download main stage set to talk Download, teaming up with Jot as new co-vocalist and zombie survival plans. You’re at Download! Are you excited to be here? Yeah! I’ve been looking forward to it for a long time. It was strange getting up so early! […] 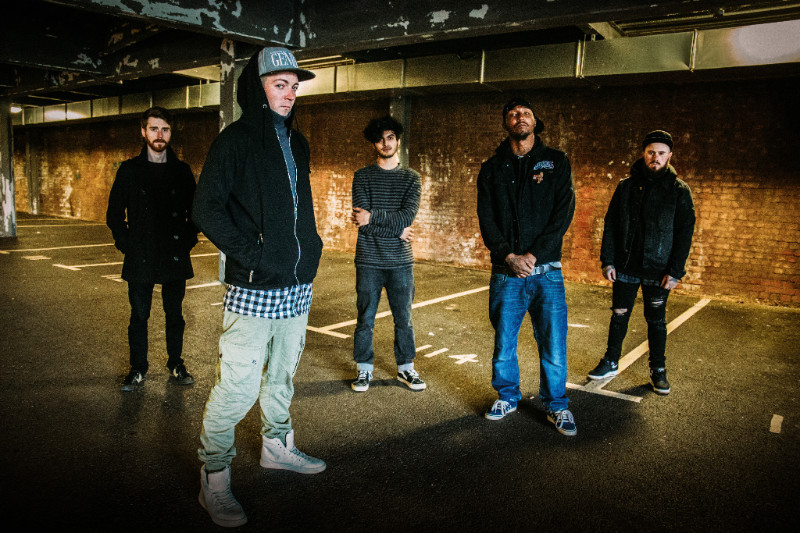 We caught up with Hacktivist bassist Josh Gurner following their Download main stage set to talk Download, teaming up with Jot as new co-vocalist and zombie survival plans.

Yeah! I’ve been looking forward to it for a long time. It was strange getting up so early! I don’t like getting up that early for anything but playing main stage at Download is probably something worth getting up at 6 in the morning for!

Yeah definitely! How did you think your set went? I managed to catch some of it and thought you were great! It was really early but the crowd seemed into it!

Yeah it was a really good turnout. A really good fan response and to see a bunch of familiar faces in the crowd is always good! That’s one of my favourite things about Download, it’s just a big bro-fest! Just one big hangout, you bump into people you haven’t seen since the last Download and you can see fans from all over the place, even Europe and you can pick them out in the crowd.

Are you looking forward to seeing anybody?

Yes, I managed to catch a little bit of SikTh while we were doing press earlier. Yesterday was awesome. Turned up in time for Northlane, they were really good! Astroid Boys were sick. It’s as fun to play as it is to be a punter.

If you could pick a main stage line-up for Download, who would you have?

I don’t know how far I’d push it…. That’s a pretty big question. I’m sure there’s whole teams of people who spend six months of the year trying to answer this question. I think one of my favourite bands I’ve seen at Download is probably Deftones, I don’t think they’ve headlined but they’ve sub-headlined a couple of times. I think they could probably create a good long set. Have they got any anniversaries of albums coming up soon? Cause I’d like to see that! So we’ll have Deftones playing all of White Pony just because. A Cyprus Hill set would be dope. Meshuggah would go down like a fart in a space suit on main stage I think. They’d be the third day headline and I’ll just fill in the gaps with other bands, friends and that.

Are you going to put Hacktivist on the line-up?

Yeah most likely, somewhere early so we can drink for the rest of the day!

Fair enough. You’ve just announced Jot (Maxi) as your new co-vocalist, how did that come about?

Jot is actually an old friend for most of us. He’s from Milton Keynes, a little old unassuming town/city that we’re from. We didn’t think about it before Ben had left but obviously once he’d gone we had quite a few people getting in touch. People from the metal scene, different styles of people but we came back to Jot because Jot did a track on the first album and it was a real easy process. He piped up and was like “what do you reckon? Shall we give it a try perhaps?” And we thought “yeah that would probably be really nice” so we got him across. It sounded sweet, we got him to record 2 Rotten and yeah it’s all onwards and upwards.

That’s cool. Can you tell us about the inspiration behind 2 Rotten?

It’s quite a conceptual visual track I guess. It’s all like a concept track of this near future dystopian, kind of dark look at where we’re headed. A lot of the stuff, we kinda point out all the crap in the world but try and at least be positive with how it could get better but Rotten is kinda a track about how things could get real bad. The artwork for the first album was inspired by the lyrics from Rotten and capturing the whole vibe of the track. So 2 Rotten is just a band track of that, giving it a different lease of life, which is quite different than the no band track that was on the album.

That’s cool! You’re heading off around Europe for some awesome festivals, which are you looking forward to the most?

Download Spain sounds like a real interesting one! It’s the first ever one, Download is obviously an amazing brand. Festivals in Spain though! It’s just a different experience, they tend to kick off at about 4 or 5PM and then run until about 4 or 5 in the morning because it’s just too hot to do anything in the day. So you can just sleep all day, go check some bands out, drink and party. It’s pretty chilled. So that one! Or Glastonbury! If you’ve never been there before, its really really good so check it out. It’s the first ever time they’ve had a metal stage at Glastonbury s that’s going to be something in itself! We’ll see how that goes down!

It should be good! You released debut album Outside The Box last year which everybody has loved and has cemented Hacktivist as a band to watch and get behind. SO what does the rest of 2017 have in store for Hacktivist?

It’s definitely getting exciting now that we’re back up and running. There was a bit of a lull while we were sorting out getting a new vocalist, making sure it was the right decision, but now we’re locked in with Jot, it’s just getting the writing down. We’re releasing a second album early…. I don’t know if I’m allowed to say! Soon.. As soon as possible but that’s the focus at the minute, getting the new material down. There’s ideas flying about all over the place, bringing all kinds of new stuff to the table, we’re writing in an extremely exciting way. So yeah everyone’s pumped to get new stuff out and tour.

That’s brilliant. There’s a new Punk Goes Pop record coming out soon so if Hacktivist were going to cover a current pop song, what would it be?

We’ve dabbled with a couple. I don’t know if you’ve heard but as a hobby Timfy (James, guitar) likes to do metal versions of pop songs. It’s hard to say! I could probably hum you pop songs but I couldn’t tell you the name of them. They just worm their way into my ears from the radio and stuff. I don’t know! I don’t wanna pass but I can’t think of any pop songs. Ed Sheeran I guess? He just seems to be in the charts all the time. Nah we wouldn’t cover that!

It would be interesting!

Yeah, it’d be a challenge!

We always end with some random questions; what would be your zombie apocalypse survival plan?

Finding a nice pub and boarding up and smoking it out! Wait until it all blows over!

Exactly. It’s the pacifist approach. If people wanna fight it out that’s cool.

If you could be a Disney character who would you be and why?

It would be too easy to say Mowgli but I feel like maybe that is my calling in life! I’ve learnt a lot from The Jungle Book, he’s a good one to aspire to!

To be fair, I’ve got a long standing love for The Evil Dead. Horror is not really my genre but I remember watching that loads and loads as a teenager. It’s ridiculous but I think a good horror should be ridiculous, if it’s not gonna scare the crap out of you, it should at least be a bit funny.

Yeah that’s cool! Finally is there anything you want to say to our readers?

Keeping on listening out for Hacktivist, we’ll have more and more exciting stuff coming soon. We’ll be playing somewhere near to you soon. New stuff! Just keep your ears open! There’ll be exciting things!

Awesome! Thanks for speaking to us today!

Sure man no worries! Thank you very much!