British alt-punk trio God Damn return to Download 2017 on the back of their 2016 release of album Everything Ever. We caught up with the band at the festival to talk clashes, touring with some incredible artists and the inspiration behind It Bites. You’re at Download! Are you excited to be here? All: Yeah! Ash […] 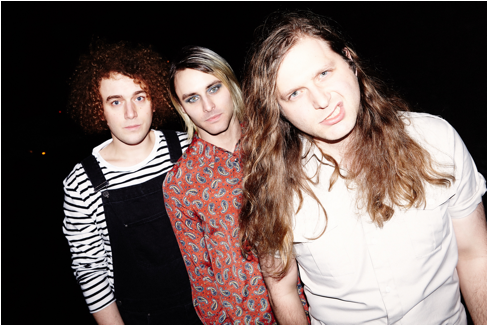 British alt-punk trio God Damn return to Download 2017 on the back of their 2016 release of album Everything Ever. We caught up with the band at the festival to talk clashes, touring with some incredible artists and the inspiration behind It Bites.

Thom (vocals/guitar): I never had us down as a Download band but we went off last time! We clash with everybody today! So we’ll see how we go today!

Everybody seems to be clashing today!

Are there any bands you’re looking forward to seeing?

Thom: System Of A Down, Krokodil, Red Fire if we get to come another day.

Thom: We’re on the same time as Baroness so fuck them (laughs).

You’ve recently played across the UK and Europe with the likes of Thrice, Jamie Lenman and Frank Carter etc, how have they been for you?

Thom: They’ve been great, it’s nice to know that your heroes and the music that you’re into digs your music. Onstage I said that when we were kids we used to listen to his band (Jamie Lenman) and wanted to make music like him and when he was on stage he said he listened to God Damn and wanted to make music like us and it just all goes full circle and it’s really fucking cool when we’re still this relatively small band compared with a lot of bands. It’s nice to know that we are impacting on a diverse musical society.

Ash: It’s been great because they are people who make great music.

Thom: We wouldn’t go on tour with anybody that we didn’t like!

James: Nope! That’s why we ended up touring with so many bands that were so different. We played with The Cribs one day, Thrice the next and then Jamie Lenman. They’re all so different but this band is eclectic enough to play with so many different bands. It’s great because you grow up and you don’t just listen to one thing, you listen to lots of different stuff.

Thom: I think that’s the world we live in now isn’t it really? We’re a product of that!

You’re heading out to play Download Madrid later this month…

James: That’s the next single!

James: When we played with Thrice, there was a few people at the Nottingham show that we were talking to afterwards and they’d cover over from Spain to see Thrice and they were like “oh we’ll see you guys play Download Madrid!” They do definitely have a culture in mainland Europe, they go to a lot more effort to see bands so it’s going to be really cool to see what playing in front of that crowd is like because everyone’s going to go fucking ape shit over it!

Hopefully! You’re playing a show soon with the Foo Fighters in Budapest, are you looking forward to it?

Thom: We haven’t announced this yet.

It’s all over the internet!

James: Oh really? We didn’t know that. It hasn’t officially been announced.

Thom: So yeah we’re playing with the Foo Fighters, we played with them in Manchester a few years ago and it’s nice to know that they actually like our band enough to ask us back, or let us come back! And we get to go to Budapest, we’ve never been there!  Last time we played with them, we were first on at like half past 5 and we played to an insane amount of people and now I think we’re the only support, that’s not pressure is it? It’s not pressure because they’re the most humble dudes, it’s like you already know them.

Your latest video It Bites has a light-hearted Thriller feel, how did you come up with that idea? It’s a really cool video!

Ash: I had this lightbulb situation. I phoned up our manager cause we’d been scratching our heads for weeks on what to do. Creatively, sometimes it gets a bit draining behind the scenes.

Thom: We can just never agree on artwork or videos and it was just like “do you know what, fuck it I’m out”

Ash: Yeah so I had this brainwave, there’s videos over the years in my lifetime that have really stood out to me one was Michael Jackson’s Thriller and the other was Backstreet Boys’ Everybody. These two videos are probably the two videos ever that stuck in my head and I was thinking of It Bites and had this idea about zombies going around biting people and scenes like in Thriller where there’s lots of people doing the same dance moves. We just handed it over and that’s what came from it!

That’s fair! So you released Everything Ever, your debut album last year. Have you got any plans for a follow up?

Thom: We’re writing for it at the minute. We’ve written an album and then we’re going to write another album and then we’re going to pick the best stuff and we’ll see how it goes but we’re still touring Everything Ever. We’re never not creative. If you’re feeling creative, you don’t ever quash that, you allow time for that. So we’re definitely working on another album. You shouldn’t say that though, you should make people think this could be your last album right? Maybe we’ll do that with the next one!

Thom: I think I’ll get told off for saying all I said about the next album but anyway…

There’s a new Punk Goes Pop record coming out soon so if God Damn were going to cover a current pop song, what would it be?

Thom: This is the million dollar question cause this is your little avenue into Radio 1 if you pick a really good cover song!

James: We can go back and be like “we should actually do it!” What’s that Bruno Mars song? The one that’s really big? Well that’s all his songs. The one that’s literally everywhere.

Thom: It’s not a really current one but I like that “take me to church” song. It has a really good chord progression, sometimes pop songs have a really killer chord progression! I wanna cover Royal Blood’s latest single!

Anything by Royal Blood you’re guaranteed is going to go down really well! We always end with some random questions; Marvel or DC?

I so would have picked DC! What was the last lie you told?

Thom: In this interview or beforehand?

Ash: What was the story we made up to tell bands?

Thom: Oh shit yeah! I said a couple of lies in the last interview, I’m lying to you right now. It’s the Jeremy Corbyn ‘what’s the naughtiest thing you’ve ever done?’ “oh too naughty to say!” Do you know, all the best liars make you think they’re rubbish at lying! So I’m really shit at lying so I dunno! I lied and said Dave Grohl was my uncle in an interview! There you go!

Ash: We were playing a venue in Copenhagen.

Thom: Hang on, can I just interrupt, want me to tell you an embarrassing story? Our tour manager’s sunglasses! (everyone laughs) Sorry carry on!

Ash: So we’re reaching the absolute pinnacle of our set right, it’s going great, it’s like the best gig ever! You can really tell James is really enjoying it, he’s jumping around and then he just has this big rock star moment and slides with his guitar on his knees. Bearing in mind, we’re halfway through a song.

Thom: I’m singing and he’s the only one playing guitar

Ash: So he’s gone sliding down on his knees and he knocks his lead out of his guitar!

Thom: He manages to yank it out with his leg or something and then there was the most Alan Partridge fumble to put his guitar lead back in!

Ash: It was a humbling moment during a rock star time!

Thom: And then there was that time when we all shat ourselves at the same time! A synchronised shit!

That would take some skill! Finally is there anything else you want to say to our readers?

Thom: I wanna say I bid you a fair do and just shave and never have a shower before Download because it’s pointless.

Thom: He’s been trained in PR