We caught up with Yorkshire rockers Fizzy Blood following their Download set to talk the festival, upcoming plans and playing South Korea… You’re at Download! Are you excited to be here? All: Very excited Jake (drums): More excited now than I was before. I think I was more nervous than excited before! Tim (guitar/keys): Yeah […] 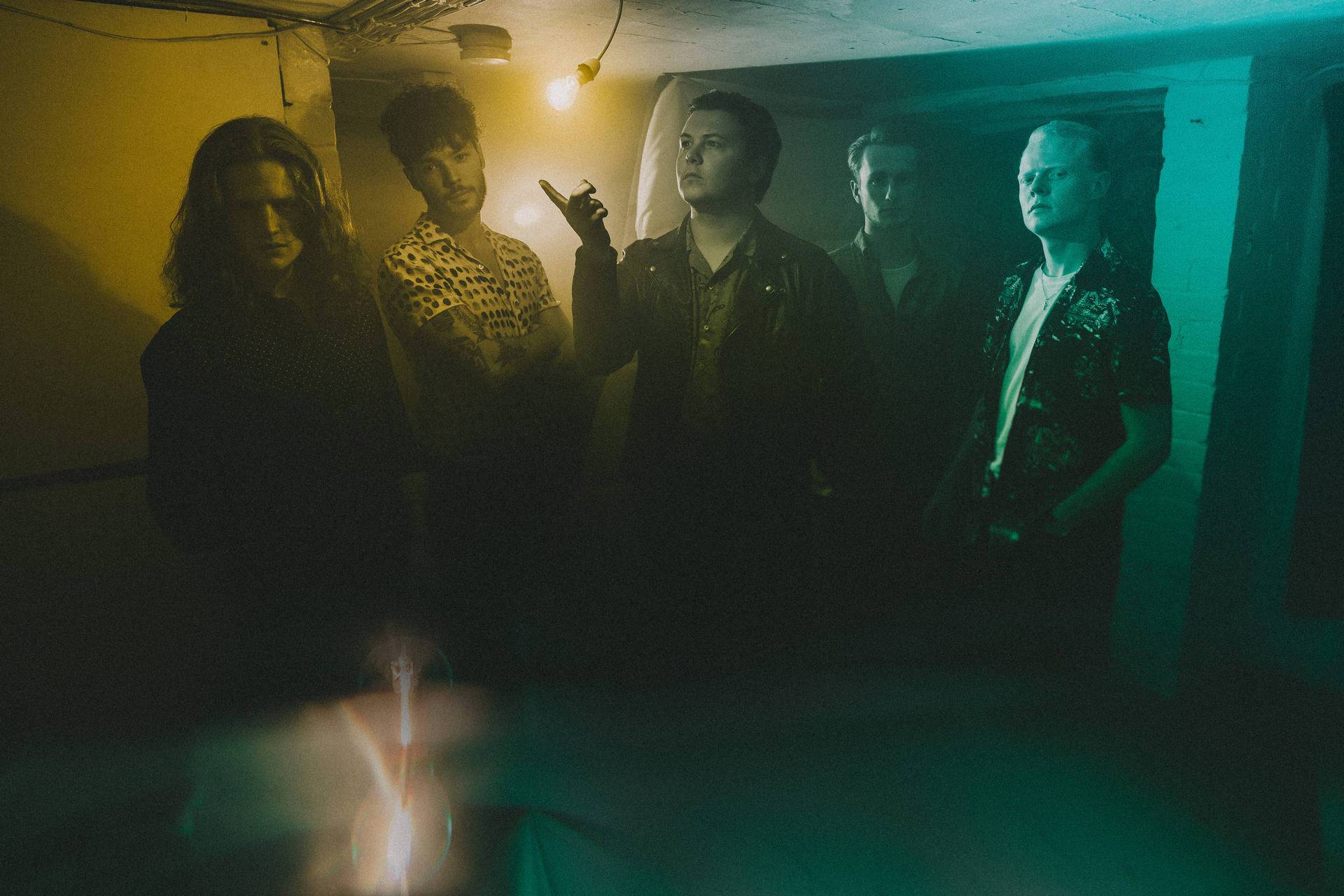 We caught up with Yorkshire rockers Fizzy Blood following their Download set to talk the festival, upcoming plans and playing South Korea…

Jake (drums): More excited now than I was before. I think I was more nervous than excited before!

Tim (guitar/keys): Yeah the interviews we did before we went on was a little bit weird because I didn’t realise how nervous I was and then as soon as I got on stage, the nervousness was released.

Benji (vocals/guitar): Yeah if you’d asked us this question about an hour ago we’d have been like “no!” (Laughs). We are loving it!

That’s good. How was your set?

Tim: It was really surreal. I’m gonna drop something in here; the first time we played in South Korea, we played on this outside stage and it was on a street with endless fans, not to big ourselves up, there were people there anyways, not necessarily to see us but as far as you could see there was people and it was just really weird and surreal. I haven’t had that feeling since then but it was the same sort of thing. The entire set was just surreal!

Jake: I had a moment, I was tearing up! I full on had a moment behind the kit where I was like “Jesus Christ, this is fucking class!” I just started laughing at myself like “sort out your fucking shit! You’re meant to be in a fucking rock band!”

Benji: We played under very different circumstances in 2014. We were a four piece and Tim wasn’t actually in the band. We played on the acoustic stage and we played a full set anyway but it was kinda like a traffic audience of people walking past the stage not really taking notice. But we had people in the tent and at the end of the set, we played our last song and as the riff started people were like “YEAAAAAAAAAAAAH”, I didn’t show it because you’ve got to stay cool on stage but inside I was like (pumps fist in the air). I know you can’t record actions but it was a fist pump into the air.

That’s great! Have you managed to catch anyone over the weekend?

Benji: Paul has. He said Good Charlotte were his favourite.

Tim: We drove down from Leeds today so we got here about an hour before we played so in between getting here, we had to set up a tent, do a couple of interviews and then go and sound check so…

Jake: The ones I wanted to watch were Dead! and Red Fang. I’m hopefully going to catch Dilinger and Clutch, Slayer and Aerosmith.

If you could create your own Download main stage line-up, who would you pick?

Benji: Last time we had this question who did Ciaran say?

Jake: Queens Of The Stone Age

Benji: And I said Weezer. You said Arctic Monkeys, he said Queens Of The Stone Age.

Benji: Ah that was it but then they said that they were dead and so you said Queens Of The Stone Age and Tim went for Arctic Monkeys, I said Weezer and Ciaran went for something I can’t remember who it was.

Tim: I’m gonna throw in.. I came with my dad and it was just after the whole Rage Against The Machine thing where they knocked Simon Cowell off Christmas number 1 and they did a tour after that, they played that year and it was fucking amazing! So Rage Against the Machine.

You recently toured with While She Sleeps. How was that?

Tim: Incredible! I think we’re kinda not running out of good stuff to say but more ways to word how good it was!

Paul: It was incredible.

Tim: The way they do stuff is just really…

Benji: What they’ve done with that new album is just…

Paul: They brought rock music back into the charts and they did it all themselves. They work so hard and we’ve all got so much respect for that band. They went out of their way to make us feel welcome on the tour, took us under their wing and gave us so much advice. Just watching them every night was like a lesson in itself. We love that band!

Benji: It speaks volumes that under normal circumstances, I wouldn’t listen to metal music but just because watching them live and seeing what they do behind the scenes made me listen to their album and their album is amazing. It’s incredible!

Benji: It is and I’m not a big fan of metal but…

Benji: Okay I like metal but not really modern metal. (Gets a bit of stick from the guys because he actually does like metal) I’m just trying to say that kind of music I don’t usually put on but their new album I have listened to quite a few times!

Last month, you released the video for Pawn. Can you tell us a bit about the inspiration behind the track?

Paul: Pawn is one of the first ones where we actually sat down and wrote it together, like we all wrote the lyrics together and the concept behind it was about predatory behaviour manipulating them and making them believe that they mean a lot and then dropping them like it isn’t worth it. The track in a broader sense is more about that attitude, not necessarily in the music industry but just the predatory and manipulative behaviour which in society today is becoming more common. It’s really inspired by that and the video is just a bit of fun really. The video is inspired by those horrible ‘80s VHS tapes of dating shows and instructional videos.

Jake: On a side note as well, it’s kind a thing for us to have written it together because when we’re writing lyrics together, they normally get scrapped about a week later. So for that song to stick is good going for us!

Paul: Normally me or Benji would write the lyrics on our own.

Jake: If lyrics don’t come from one person or two people, you kinda lose the core of the story, it’s kinda watered down which is the whole point of it to try and connect. But when five people are trying to connect with one theme it’s a mish-mash.

Have you got any plans for the rest of 2017 that you can tell us?

Paul: What we can tell you, we’ve got a single coming out tomorrow Summer Of Luv, which is the title track for our new EP which is coming out in August. It’s going to have five tracks and we’re really looking forward to people hearing it cause we had so much fun last year recording it. We’re writing another record now but we don’t know if this year that will come out and then at the end of the year, we can’t really say too much because we don’t know too much. But we’ll definitely be touring and out with some bands that are friends that we love. So yeah a lot of festivals, we’ve got Reading & Leeds coming up, 2000 Trees, a lot of cool festivals that we’re on.

There’s a new Punk Goes Pop record coming out. If Fizzy Blood were going to cover a pop song, what would it be?

Benji: For me it would be Everybody Wants To Rule The World by Tears For Fears.

Paul: For me it’d be the Gigamesh remix of Love On The Brain by Rihanna.

(Benji and Paul head off to do another interview)

We always end with some random questions; if someone wrote a biography of your life, what would the title be?

Jake: Mine would be “One Cheek On The Seat”.

Tim: I think that just covers it all!

Jake: Tim’s would be “Tim Malkin: A Jazz Odyssey!”

Jake: Yeah and mine is “One Cheek On The Seat” or “What’s That Bump In My Neck?!” (Laughs) and then a comma and then “You Tell Me.”

Tim: In brackets that bit!

Jake: South Korea. We didn’t really tour there but we played two shows at this festival called Gandhari and it was incredible yeah!

Tim: It was nuts because we’d been to places other than England.

Tim: But it was just like a complete culture shock as in how different everything was and you could go and get a sit down meal at five in the morning, just like drink with your mates and then like..

Jake: And the food is better than anything you’ve ever eaten.

Tim: Yeah like the UK equivalent is a kebab shop with some donner and garlic mayo and chips and then in Korea you’ve got these pork belly barbecues and you can sit there all night!

Jake: It’s weird because you walk past these restaurants and there’s like hoovers hanging from the ceiling and then underneath them there’s like round tables and they bring you over raw meat and you just have to cook it yourself. It’s great at like five in the morning, they bring you loads of meat and you just have to cook it and eat it. Whereas if it was in the UK someone’s face would be on the hot plate, someone would be throwing raw meat, someone would be sick.

Tim: There’d be hair extensions fried to the hot plate.

Tim: But over there it’s just really civil and what they do.

Jake: It’s ace! They can handle their drink!

Jake: It’s stronger than anything you can legally buy in the UK.

Tim: It’s just what they drink and they just handle it! It’s great!

Jake: We bought a bottle of it each and had an amazing night that I don’t remember much of! I remember having tequila being poured in my mouth by a guy dressed as a Red Indian while we were stood on the stage in this club trying to get everyone to do a Mexican wave.

Tim: We thought it was going really well but it really wasn’t at all! So yeah to summarise… South Korea!

Sounds insane! You can only save three things from your house in a fire, what would they be?

Jake: I wanna answer yours.

Tim: Okay you answer mine and I’ll answer yours.

Tim: (laughs) Yeah very accurate! Jake’s would be… How censored does this have to be?

Jake: My mum’s going to read this!

Jake: Yeah clothes, my high hats and if we’re talking about drum gear, it’s got to be my snare drum as well and my records/record player.

Jake: Hello! Check us out!

Jake: Come have a beer, or a lager, especially at Download. Cheers!

Both: Thank you very much.