Scottish metallers Deadly Inscription recently released the NSFW video for new single Cemetery Wind, we asked the band to take on our A-Z challenge! A song which made you want to make music? Trivium – Rain Best rider you have ever had? 5 Bottles of Buckfast & a packet of Tunnocks Tea Cakes. Craziest moment […] 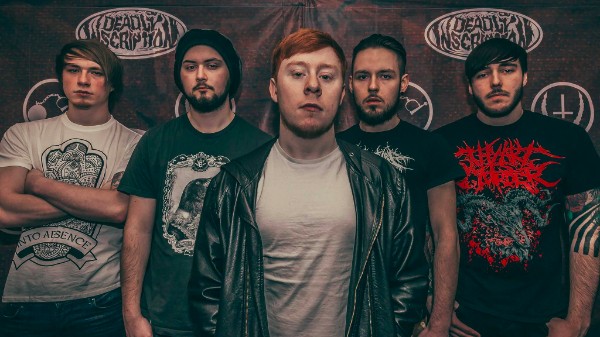 5 Bottles of Buckfast & a packet of Tunnocks Tea Cakes.

Taking 2 minibuses full of Scots down to Manchester to see us play the Manchester Academy.. Holy shit that was a crazy night.

All Men must face their final judgement, this is but the law of flesh, bone & spirit.

Deadly – self titled punk masterpiece we wrote when we were like 16. Basically consisted of three power cords and the words We’re fucking Deadly.. thankfully not played anymore.

Cemetery Wind has been great to play live. I think because we hadn’t ever played it live and had it sitting there for so long. We love to play all our songs, but the faster the track the better and with it being our newest we can’t help but get that new tune buzz

Trevor Strand of The Black Dahlia Murder, Trevor if you see this hit us up mate!

Van life and just in general wanting to murder each band member on a daily basis.

One of our band members has been know to drink booze & piss out of his own shoe.

More liver failure than a joke, but we have an ongoing game where if someone drops a 5p into your pint or drink it needs to be finished. After a few days on tour it becomes more a battle for life than a joke..

The key to writing the perfect song is never decide that’s it just finished, there can always be more balls or something missing in a track. We always go over a new track thousands of times, taking different approaches to where we would like it to go, then practise practise practise.

Our last tour basically spanned the whole of the UK.

Lorna Shore, only recently heard this band but wow..

Bleed From Within, we would love to tear Glasgow apart with these guys.

The more you weigh, the harder you are to kidnap. Stay safe, Eat Cake.

We had the idea of a man made virus going airborne and basically causing global panic, death & torment. Death in the air was mentioned and then came the idea of Cemetery Wind. Were really proud of the track and its video, depicts our idea really well.

Totally, I think up-coming bands had a better chance of progressing up the industry ladder in the past, where as now people know what they like and tend not to venture into the unknown or listen to new unsigned bands. The live scene was better too, people actually had cash and ventured out too gigs..

I think we would love to hear our songs in even further dropped tuning and on 7 maby even 8 strings, possibly throw in some keys. Or in 8 bit that would sound amazing.

Everything, we do this for you guys and can’t thank our fans enough for the support they have given us over the years.

Our singer Stuart fell out the van on tour a few years ago, a bottle of pepsi fell into the vans door frame​ and he came down hard on his ankle. X-rays were needed and he was off his feet for a good few weeks.

Gorillas, we all basically revert back to a more primitive lifestyle when we get together.