UK glam punk rockers Dead Frequency have spent the last few years building a strong and loyal fanbase through constant gigging all across the country. The trio have shared the stage with the likes of party king Andrew W.K and rising superstars Creeper. But following the November release of their Tough Tracks and Setbacks EP, it […] 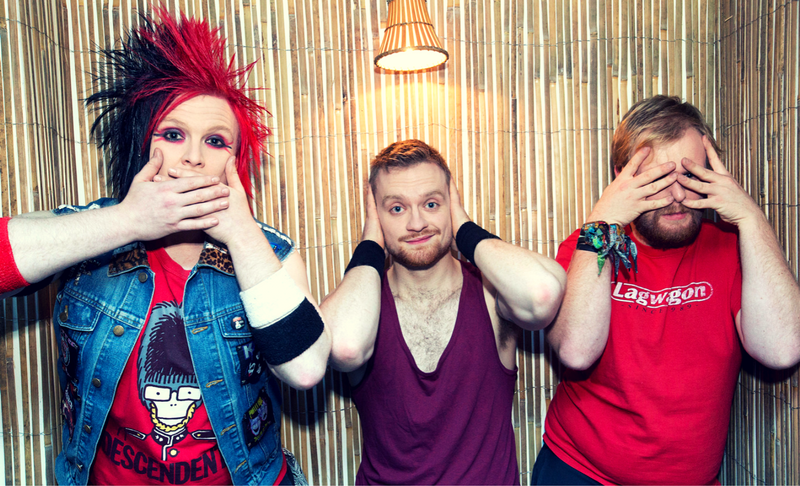 UK glam punk rockers Dead Frequency have spent the last few years building a strong and loyal fanbase through constant gigging all across the country. The trio have shared the stage with the likes of party king Andrew W.K and rising superstars Creeper. But following the November release of their Tough Tracks and Setbacks EP, it is clear to see that Dead Frequency are ones to watch and could be joining the aforementioned Creeper in the rising superstars stakes! We challenged frontman Matti Fantasi to tell us more about the band in our A-Z challenge:

Two boxes of Queen signature beer which is still sat in our fridges.

Missing the first show of our first major tour due to our rental vans door coming off of its hinges within an hour of having it.

Everything Will Be Alright from the new EP is very personal and is about family bereavement and how you want to be the stronger person in the relationship to help overcome tough times.

The Devils Dream came out pretty quick and is one of my best lyrical works to date.

Probably Billie Joe Armstrong for a verse with a solo from Eddie van Halen.

Late nights and early starts for work, playing to no one, travelling a lot of miles to play to no one, the countless emails and messages that go unread or unanswered by venues, festival, promoters etc.

James actually got us featured on itv2’s viral tap for falling off of a crate on stage.

Plenty, most not suitable enough to print.

Make it personal and express how you feel, add a good vocal melody and some singalong parts and you’ve got yourself a song.

7 hours up and 7 back only to find out we weren’t actually on the bill and the show the next day (8 hours back the other way) had been cancelled. The first night they felt sorry for us and let us play anyway.

We supported Creeper last year and thought they were great. they seem to be really going places now and it’s great to see it. They fully deserve it.

The obvious choice is Green Day but we’d also be happy with Kiss or Van Halen.

‘Don’t settle on being the buzzard, spread your wings and soar like the eagle you are’ – Matti fantasi

We’ve had a pretty tough few years with plenty of setbacks and kind of fell like we are finally into the next chapter of the and.

Going on what we listen to yes but anyone from a certain era would say the same. There are hundreds of amazing new bands out there to be discovered and loved.

Nothing unusual just a few limited run t shirts for the EP.

Happy hardcore versions of everything.

It’s cliche but having people coming to see us and support us is one of the only reasons we still do it.

Half a tooth replacement due to part of it being hit by a guitar, various bruises, cuts and wounds. Sadly that’s part of having a high energy live show.

James our bassist as he usually drives.

A panda, looks like it could be great fun but in reality is lazy and just eats and sleeps all the time.