“We are a female fronted, alternative metal band, based out of Toronto. This is Hell To Pay, a track off of our self-titled EP…” 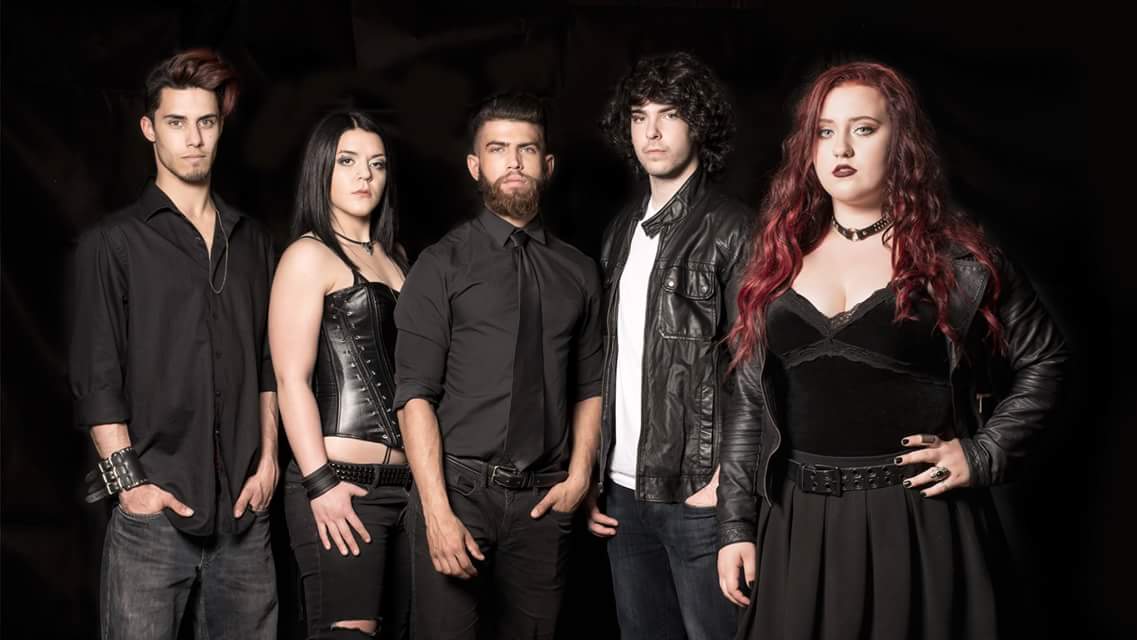 “We are a female fronted, alternative metal band, based out of Toronto. This is Hell To Pay, a track off of our self-titled EP…”

Elle: Forty Six & 2. Tool was one of the bands that made me fall in love with rock/metal and the complexity and uniqueness it possesses.
Nick: Estranged by Guns N’ Roses
Jiv: The Pot by Tool. So much interesting rhythm and melody in that song, very inspiring.
Matt: 22 Faces by Periphery
Russ: Know Your Enemy by Rage Against The Machine

We have not toured yet. Hopefully we’ll be on the road next summer!

Pretty much any night in Oshawa is crazy!

Sabbath Blues and White Dust. These are our first two originals which we don’t play anymore.

Elle: David Draiman. I would absolutely love to sing with him.
Nick: Richie Nguyen of Odd Ones
Jiv: Randy Blythe
Matt: Aaron Marshall (INTRVLS) or PILINI
Russ: Howard Jones (even though he’s retired)

There’s a few. Keeping a steady line up is very hard as you must find people you get along with, write well with and have the same vision and dedication as. All of these things are hard to find in a musician, but right now, we’re pretty confident in the line up. This, as well as continuing to produce fresh ideas, making music we all connect with and time management.

RUSS IS THE “DAD” OF THE BAND.

Being open minded to everyone’s ideas and experimenting with new writing styles and techniques. Also, just simply putting your heart and soul into it.

Five hours to Pembroke for a live performance and interview.

Elle: Dylan Murray. He deals with TS and the struggles that come with it, but once he starts playing, his tics go away. Very humble, extremely talented, young guitarist. Check him out!
Nick: Dan Donegan
Jiv: Lindsay Schoolcraft of Cradle of Filth for SURE. She’s a phenomenal musician who never ceases to amaze me, musically and personally.
Matt: My guitar teacher, Kevin Reid. He was my biggest influence and definitely my biggest role model in life. He is amazing.
Russ: KoRn live. Unreal musicianship and performance.

Elle: Considering genre, I’d have to say Disturbed as we have a similar, heavy melodic approach to metal. I also saw them recently and am a huge fan of the group and David Draiman is one of my vocal influences.
Nick: Disturbed
Jiv: Halestorm. Chanel would just pass out!
Matt: Avenged Sevenfold
Russ: Halestorm or Billy Talent

Elle: Everywhere!
Nick: Toronto
Jiv: Europe is ideal for us in my opinion.
Matt: Europe or Australia
Russ: Australia. I’d go diving on my downtime for sure.

Elle: “The idea is, if I can’t heal from my art, then how can you heal?” (Maynard James Keenan)
Nick: “You’re not lost if you don’t know where you’re going”
Jiv: “It’s the business of music, kids, not the music business.”
Matt: “Always remember, and never forget… Damn I forgot what I was going to say.”
Russ: “History is written by the victor.”

Our previous EP was self-titled as that was our first single/demo/EP released as Darkstone Crows.

Rock The Brook Party on September 10th with No 2morrow (192 Glastonbury Rd Northbrook, ON)
The Atria on September 25th opening for Russian band, Arkona.
The Nocturne on October 9th for our buddy’s birthday.

Yes. Pop music is currently dominating the music industry and the industry has become all about money and trends.

Elle: I’d like to perform our song Adrift with a live orchestra. The song will be on our new album with piano, cello, harp and special guest, Lindsay Schoolcraft.
Nick: Death Itself was the song I wanted to really make a variation off of and it’s currently in the works as it will be on our new album!
Jiv: Slowing down the BPM and letting Elle really belt it out without the heaviness of the drums and loud guitars has always been something in the back of my head!
Matt: A heavy version of Adrift.
Russ: Orchestral version of Piece of Mind.

Everything. They’ve gotten us where we are and given us praise for our hard work and they will continue to do so. We love them.

Russ had a cast on for a couple of weeks because he snapped a tendon in his left thumb.

Jiv’s. We once arrived 10 minutes before our set due to this lady. The set went well though and that’s never happened again. We’re professional, I swear, haha.

Are there crows at the zoo? Haha.