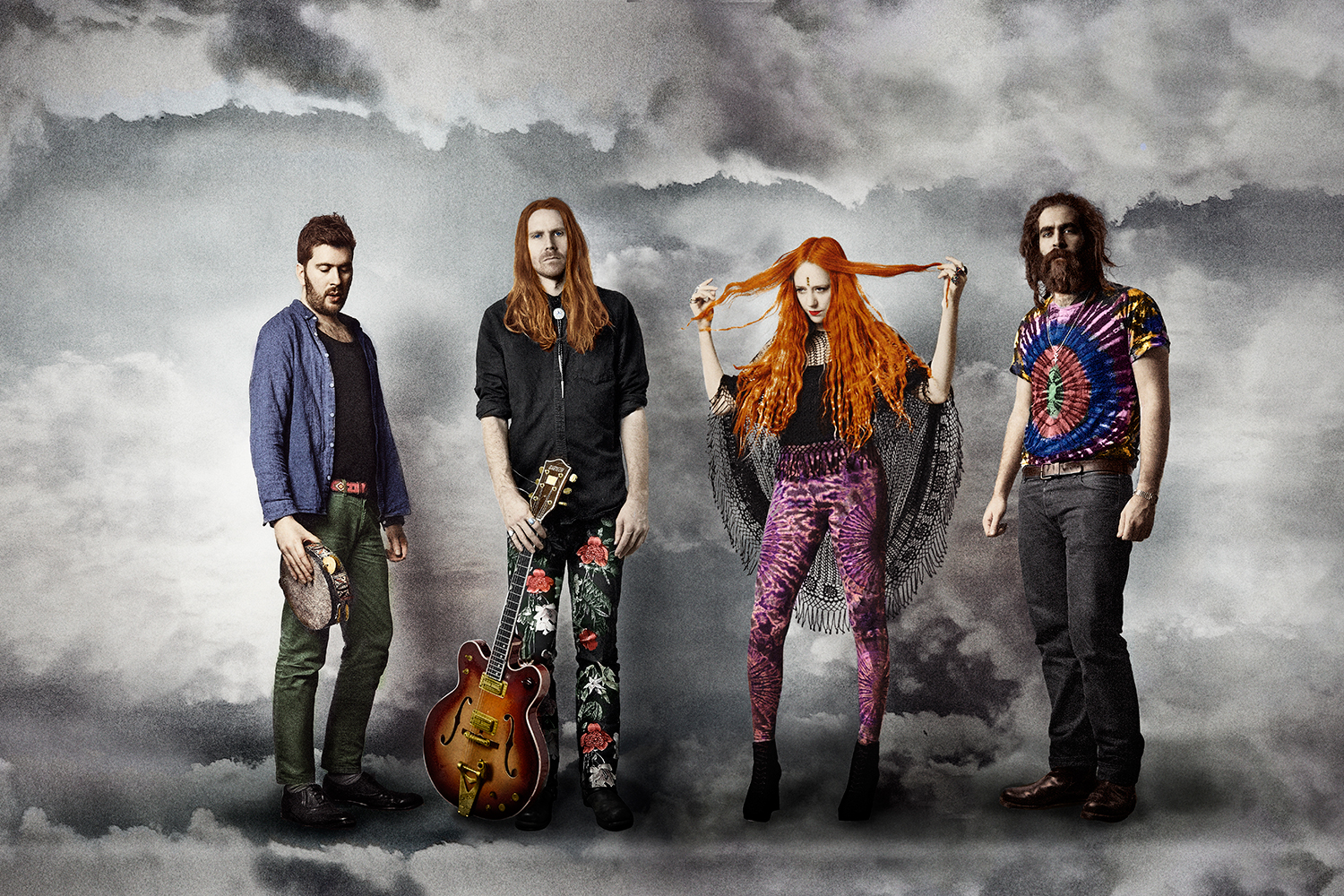 Karen Shaw chats to Dark Moon ahead of the release of their debut album ‘Lost In Love & Fear’.

Hi guys! Before we talk about your up and coming debut album, could you tell our readers a little bit about the band, and how you formed?

The band really came together by chance. Lola had been writing music for a long time but was yet to realise her full vision, when a friend suggested she play with a stranger called Dusty, who had recently disbanded himself. Having fairly contrasting musical influences, they were united in their love of the 60-70s era and atmospheric soundscapes of a darker feel, and were quickly joined by Dusty’s longtime friend Chris who completed the trifecta. The bass player role remained elusive for some time until musician Justin Gartry stepped up. Our sound has morphed and progressed at high speed, and we have spent much of the time working on our craft together behind the scenes. The time and space has definitely influenced our current sound, which we feel has matured to the point where we are ready to set it free, thus Lost in Love & Fear has arrived.

So you’ve just released your new single ‘I Fly’, with your debut album due out in November (available for pre-order now), firstly it’s such an immersive and emotive track, you can get lost in it very easily. If you had to use only one word to describe it though, what would it be?

The albums title is ‘Lost In Love & Fear‘, where did the inspiration for this come from? Does its meaning flow throughout the album?

Lost in Love & Fear is about a crossroads, caught between the light and the dark. The light is calling and the path is clear but the transmutation of the darkness into the light is keeping the fire alive, holding space to evolve from the shadows of life. This was the inspiration of the track titled ‘Lost in Love & Fear‘, and we did choose it for the exact reason that we felt the meaning flows through the album. Sonically and through texture there is a focus on contrast within the album, highlighting a pull between the light, the dark, the ethereal, the heavy, space and acceleration.

Music Engineer Nick Brine has done a great job with the album, could you tell us a bit about the overall process within the studio, and if they have turned out how you envisioned?

Nick’s approach to recording worked great and was a perfect fit for us. We recorded Live directly to 2” tape, trying to capture the most honest version of each track, as well as the spirit of the moment, which plays heavily for us at a live show. It was a big goal for us to get every track sounding somewhat different and give each its own sonic identity, whilst simultaneously creating a journey experience for the listener with each song drifting into another. Dusty’s (co-producer) favourite album is Electric Lady Land (Hendrix). In that album production wise there is so much variety, with different studios, some old tracks, some new and a variety of moods with somewhat of a journey, as well as a cover tune.  From our perspective that is important in an album to create a world of it own, which can be hard to achieve sometimes in a singular session. Our approach was to move the drums to all possible parts of the studio for every track, to create a different feel for the acoustics. We utilised the actual drum room very briefly, instead using the tiny vocal booth, the end of the studio in the corner and the outside stairwell with the kit set up at the bottom of it. Nick Brine knows the studio inside out and knew all the sweet spots to place the kit.

The album was recorded at Rockfield Studios in Wales, who have hosted legends such as Queen and Mötorhead, what was it that drew you to this studio?

Recording at Rockfield was again another fateful encounter for us. We knew we had to get outside of London and ourselves in order to make the record that we envisioned, so we reached out to a few studios that could work. A few weeks later, by chance we were driving through Wales when we got a call back from Rockfield. As it turned out we were just down the road from the studio, so we headed over to have a look. There is a long driveway up to the studio and barns, where Lola had somewhat déjà vu and remembered she had been here before as a child. It all felt right from then on, so we went forward with the project based around recording there. You could feel the history in the walls and that was exactly what we were looking for.

“The Gong is the doorway to Dark Moon’s psychotropic grooves”, where did the idea for using gongs within your music originate from?

Lola has a background in Sound Healing, however it was in fact the formation of Dark Moon and the Gong that led her on this journey. Having been songwriting and creating music for many years, she happened upon a Kundalini and Gong Meditation class one evening, where upon hearing the esoteric and undeniable resonance of the Gong, she realised this was the sound she had always been looking for. Luckily the band had just formed so here was the ideal outlet to explore this and as fate would have it, a friend then gave her a Gong! From there has led a lifelong journey and exploration of the Gong and the healing power of Sound, which we like to incorporate within the realms of Dark Moon wherever we can.

The album is out on the 24th November, and you have a launch party on the 30th in London, can you tell us a bit about the show and where people can get tickets?

This is our only London show this year so we are very excited about it and are preparing a fully immersive and sensory experience for our listeners. We would like to take people on a journey of the album through sound and light!

We will also be joined in support by the cinematic sounds of our friends TOUT.

Check out I Fly;

What does 2017 hold in store for Dark Moon? Are there any planned tours, shows, videos ect for us to look forward to?

Journeying to the next record…

Time for a couple of less serious questions, does anyone have any irrational fears?

A fear of the dark…

Most embarrassing moment at a show or something going wrong live?

We tend to use a lot of projections to flood the show with imagery, enhancing the visual journey but we like to start in darkness. However one show we did many moons ago, the projections failed on us so we played the whole gig in total darkness, which wasn’t such a bad thing – we quite liked it – just a bit of a surprise.

Finally, can each of you tell us one fact about yourselves that no one would expect? (The more unusual the better!)


Callum is from Tasmania, Australia – Guitarist and co-producer on the album.

Lola is trained to retrieve your lost soul

Chris can do the Moon Walk

Brilliant! Thank you for your time with AltCorner!

Check out this link to hear the title track Lost In Love & Fear   https://soundcloud.com/thisdarkmoon/lost-in-love-fear 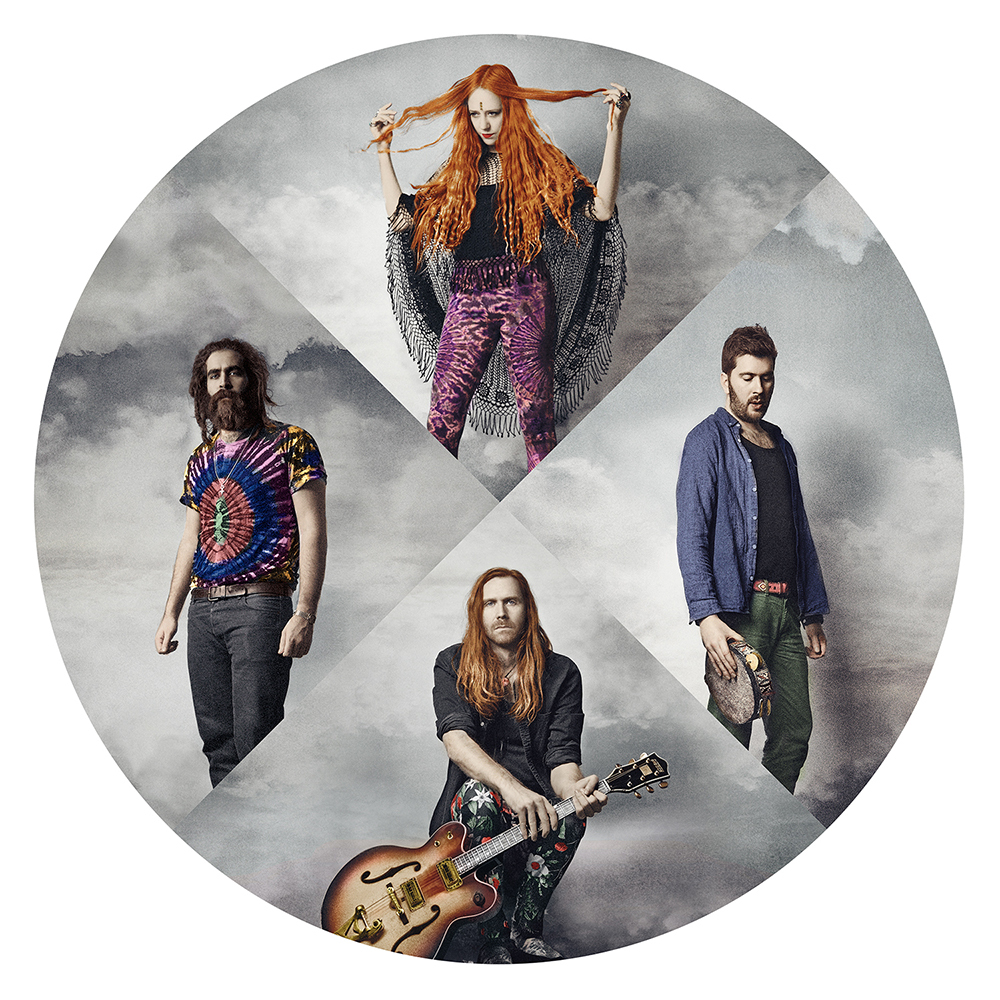