Codewalkers take on the A-Z challenge

Our A-Z challenge is a fun way to get to know the upcoming talent across the world! Up next, we have Welsh rockers Codewalkers. 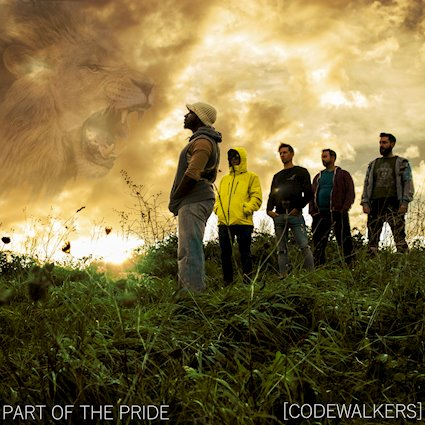 Chay – Once had goat curry served to us as we were going on stage so had to munch between songs.

Daf (guitar)- Driving through what was pretty much a river on the way back from playing Big Cwtch Festival last year.

Seun (vocals) – ‘It’s time that I told you that all you believe is a lie. And all that you went through, all your pain, they deny.’

Seun – Childish diss against a maths teacher I had when I was a kid. The line I remember is ‘having a face like a rat on cocaine’.

Daf – New single ‘Part of the Pride‘ of course! Although our first ever release ‘Street Philosophy‘ does get the crowd going.

Seun – resenting the time spent away from making music

Daf – Seun can’t seem to write a song that doesn’t hint at pyromania. It’s probably a good thing we don’t have a pyrotechnics budget for our shows yet.

Chay – C# minor (sorry). Seriously though, it’s gotta have a good hook or something the listener can latch on to quickly.

Seun – Lamb on stage supporting Faithless. The music wrapped itself around my bones.

Chay – Tank and the Bangas

Daf – There’s a great Neil Young line about committing to stuff that’s always stuck with me – ‘It’s better to burn out than it is to rust’.

Daf – I think most people feel that they fit into some kind of group and are part of something bigger than themselves.

Chay – The Moon, Cardiff. We love that venue!

Seun – Different, not better. These days you can connect with your audience more directly.

Daf – We have t-shirts with a massive picture of Seun’s face on!

Daf – We’ve done a few acoustic arrangements of songs that are on YouTube. Would be cool to do some more of them.

Daf – Having people connect with our music really helps make it worthwhile.