Chatting With Bert And Luke From Pushing Daisies

Pushing Daisies are a 3 piece Emo/punk band from Bristol, there sound is a combination of different genres such as emo, punk, grunge and screamo. Luckily for us, we had the pleasure of talking to Luke(Bass/Vocals) and Bert(Guitar/Vocals) and spoke about how their first year as a band went and how 2015 could be a very big year for them. 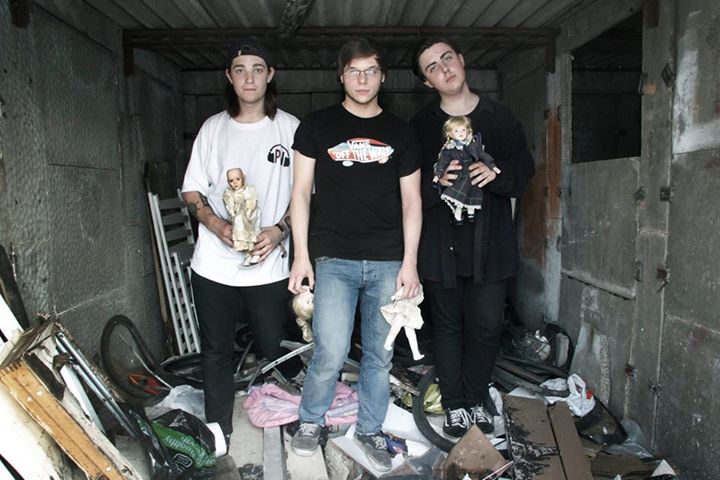 Pushing Daisies are a 3 piece Emo/punk band from Bristol, there sound is a combination of different genres such as emo, punk, grunge and screamo. Luckily for us, we had the pleasure of talking to Luke(Bass/Vocals) and Bert(Guitar/Vocals) and spoke about how their first year as a band went and how 2015 could be a very big year for them. Read the full interview below:

Pushing Daisies! How are you and how was 2014 for you guys?

Luke: Im good man! 2014 was a great start to our band, played a decent amount of shows and met some of the nicest people.

Bert: Im all good, thanks! It was a really good start for us as a band, releasing our first EP and having really a good response to it. We straightaway started gigging and being able to support bands who are doing so well such as Milk Teeth has been insane.

Your drummer, Harrison Maggs, had an injury, which put him out of action for a while, is he okay now and how did you deal with this?

Luke: It sucked so bad to see our friend in such pain and for us to not have him playing along side us had a big impact, we had our good friend Louis from Syren City fill in for the time being. But he is on the mend now and will be playing all of our future shows, #PRAY4MAGGS.

Let’s talk about the future! What are your plans for 2015? Any tours or festivals on the horizon?

Luke: Straight off the bat we would like to introduce our new member ‘Oli’ who will be playing lead guitar for us, I’ve known Oli for a long time now and to have her as a part of Pushing Daisies is a big deal to me. We have a Four day tour in February with Nevermind Me, Water Canvas and Like Home which we are all really exited for. We’re in talks of playing a festival in may, so keep yo ears open!

Bert: As Luke said we’ve got Oli in our band which as so rad! Having a second guitarist will make us sound so much better as a band and having a second ear on writing will make us write a lot better. Yeah, we have a tour fully booked with some of the best emo/punk bands around in the UK at this time. We also have one of our biggest shows on the 26th on January with Save Your Breath which will be insane for me as they are one of my favourite UK pop punk bands.

Now, I know you have been working on a new EP so it’s time you spill the beans…How does this upcoming EP differ from the ‘Middle Child’ EP and when can we expect it?

Luke: With this EP we have put a lot more thought into where we are gonna record and get it produced, as I wasn’t happy at all with how our Debut EP came out. We’re approaching a different sound.

Oli: We’re actually re-recording ‘Middle Child’ which means I can help the guys re-visit songs and get a really tight recording. I’m really excited for recording the new EP. It’s been mad fun writing the new stuff and I’m stoked on being a part of it.

Bert: With the new EP it’s been in the works for a long time. Its been more of a, let the songs come naturally approach, rather than, Shit! Lets write some songs as fast as we can and get them recorded not very well. I’ve been able to sit down for along time with my guitar and record some demos, leave it and go back to it. Because of that we’ve thrown away a lot of material as its not as good as we thought at the time, which is a really good learning curve. It differs a lot in some aspects as we were trying so hard to get a certain sound in the first EP and not pulling it off very well. But now its a lot of whatever comes to me, we build on top of it.

Your sound really blends a lot of genres together so what would you say are some of your influences as band?

Luke: To me personally it is rising bands around the UK, such as Milk Teeth, Pipedream, headroom and concave. Seeing these bands grow and mature inspires me to pushing our band to the best of our ability.

Bert: My main music taste is pop punk and it has been since I first got into music when I was young but it was because I met Luke that I’ve got massively into emo/punk/grunge. Seeing bands such as knuckle puck kind of put the two together (emo and pop punk) is awesome and shows how the scene can merge. But yeah it’s a big mixture of bands like Superheaven, Title fight, Knuckle Puck, Gnarwolves, and Soundgarden.

You seem to be into a lot of music so who are you guys loving listening to at the moment?

Luke: Today I have been jamming Milk Teeths new release that has been streaming. Tribes ‘Baby’ has been on repeat in my car and so has Nothing ‘Guilty of Everything’. Three great bands. Also Drake, all day every day.

Bert: It’s a lot of the smaller UK emo/punk bands for me. The guys in Like Home released such a good two track EP There’s A Shade/Your Nothing, cant wait to tour with those guys. Concave’s Demo release is another set of tracks that go so well together and would love to play with them one day. Also another band called Simmer. Their EP Your Tonal Mess is flawless, insanely good British emo. Definitely check these guys out, they are on to big things.

I’ve got to ask…why Pushing Daisies? …Why not Throwing Petals?

Luke: Good suggestion, I’ll have a word with everyone else to see if we can change it haha. But I think the old TV show ‘Pushing Daisies’ rocked, so yeah it seemed suitable.

Bert: Luke suggested it. Thought it was pretty rad and it stuck! We were surprised there weren’t any other bands with the name! if throwing petals becomes real… the flower tour is happening.

Haha! what about If you could tour with anybody who would it be?

Luke: Violent Soho, they are the coolest band. Nice dudes who like to party. As well as Dinosaur Jr, just so I can see them play every night, great band.

Bert: I don’t even care what anyone thinks. To tour with You Me At Six would be my dream. I’ve loved that band since they started out seeing them in a 300 cap venue then headlining Wembley is insane.

Lastly, all bands have guilty pleasures so are Pushing Daisies closet One Direction fans?! or maybe Swifters?

Luke: My iPod is full of guilty pleasures, but I’m not even embarrassed, if I like a song I like a song. I love a cheeky listen to Beyoncé now and then.