A Chat With Ryan Hamilton

On the back of Ryan announcing an array of UK house shows, we were lucky enough to have a chat with him to find out all about his solo project… 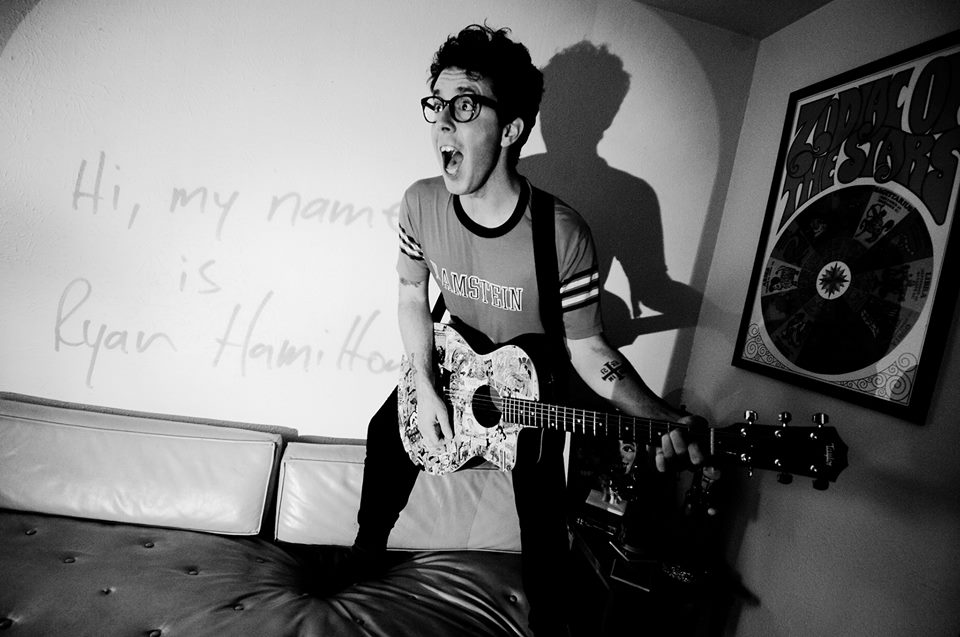 Ryan Hamilton first made his musical breakthrough with Smile Smile, a indie rock/pop two piece that saw them release three albums. In 2013, Smile Smile called it a day and Ryan was at a crossroads in his career. Thankfully, his friendship with Jaret Reddick from Bowling For Soup lead to both of them creating ‘People on Vacation’; a band built on a concept of telling a story. Their brand of indie rock reignited Ryan’s passion and desire for music and with People on Vacation becoming a heavyweight amongst indie rock, Ryan decided to create a solo album. The album is called ‘Hell of a Day’ and has been released via Pledge Music. On the back of Ryan announcing an array of UK house shows, we were lucky enough to have a chat with him to find out all about his solo project…

Hello Ryan! Firstly, it’s an absolute pleasure! How are you today?

Doing GREAT! Thanks for asking.

It has been two years since Smile Smile ended, what do you feel when you look back at the music and times you had?

I feel an overwhelming combination of stress, frustration and pride. Haha. I’m very proud of everything my former band accomplished, and I’m very thankful for the opportunities it provided. But it was an extremely hard band to be in.

People on Vacation is your primary project now, where yourself and Jaret Reddick from Bowling For Soup play a blend of indie rock, how did this ‘Supergroup’ form?

Jaret came to see Smile Smile at SXSW in Austin, TX. Before we knew it, we were on tour with Bowling For Soup and Jaret and I became fast friends. Originally we just wanted to get together and write songs for other people, but the songs turned out so great we decided to keep them for ourselves! Haha. How greedy, huh? POV has been such a blessing for me. In my opinion, it saved my career, and I’m forever in debt to Jaret for believing in me and wanting to start a band together.

You have stated heavily that with People on Vacation you want to “tell a story”, what made you choose this lyrical path?

I think we both just love the idea of songs taking you somewhere. The best songs seem to almost stop time and transport you to a far away place. When a song tells a story, or comes from a real life experience, you feel like you’re going somewhere both literally and figuratively. I think the best songs tell stories.

Now, you’ve recently released a little teaser of your solo work, what made you think “yeah, I’ll do some solo stuff”?

It’s something I’ve wanted to do for a long time, but the timing never felt right. I also never had the confidence to really go for it on my own. With the success of POV and lots of very positive life changes, I feel I’m in a good place. I’m ready. The songs are better and WAY more positive. They’re happier, and it feels good to be in a place where the music I make is happy and hopeful.

Do you approach writing your solo stuff differently as opposed to People on Vacation?

I think that’s been the hardest part. These days I write a song and go, “Is this a POV song, or a solo song?”. I think being able to now differentiate between the 2 happened in the studio with Linus Of Hollywood (producer). We stumbled upon a sound that felt like mine. Which ultimately led to an album full of songs that feel, and sound like mine.

You have a UK Tour that will see you occupying houses for the most part, what inspired this ‘house show’ idea?

I am a BIG fan of doing things a little different and creating the best experience possible for the people who are kind enough to support my art and music. Yeah, I could have just gone on a “normal” tour, but I’d much rather create memories and spend time face to face with people. I really love the House Party thing. They are unique, one of a kind shows that you just can’t duplicate in a “real” venue.

I think one of the admirable things about your approach to being a musician is your willingness to speak and connect with your fans via the use of social media, something that not all musicians do. Is the interaction with fans one of the best parts of doing what you do?

Yes! Not only is it necessary in today’s music world, I actually really enjoy it. I CAN’T STAND people with egos or “I’m too cool to reply” attitudes. Platforms like Twitter and Facebook create an amazing opportunity for artists to connect, speak to, and get to know people. I love that!

People who have pledged for the album will be getting their hands on your album really soon, for those who aren’t, what can we expect from it?

I think a lot of people are going to be surprised. I made an album full of California sunshine. Good vibes. Fun songs… and 10 songs that I truly hope leave a smile on people’s faces. I could have gone and made some sad “indie” record that I’m sure critics would have loved. Haha. But I left all the sadness behind with my former band. I’m over it. I’d much rather make a record with good songs that people enjoy listening to, with their windows down… and I think I did that.

If you could give an aspiring musician 3 pieces of advice what would they be?

Ignore what’s fashionable. Find your own voice. Be patient… and work your ass off every day. Ok, that’s 4 things… but whatever. Haha.

What new music are you enjoying right now?

I listen to a lot of OLD music… but one new-ish band I freakin LOVE is The Maine.

Lastly, thanks so much for chatting with us! Who do you prefer… Weezer or Blur?