Interview number one of Download 2017 is with Issues. We first caught up with the band at Slam Dunk 2016 (check it out here) and this time, we get co-frontman Tyler Carter and bassist Skyler Acord to talk festivals versus headline shows, Amy Winehouse and Jack Black covering Issues and Tyler’s happy place. You’re at […] 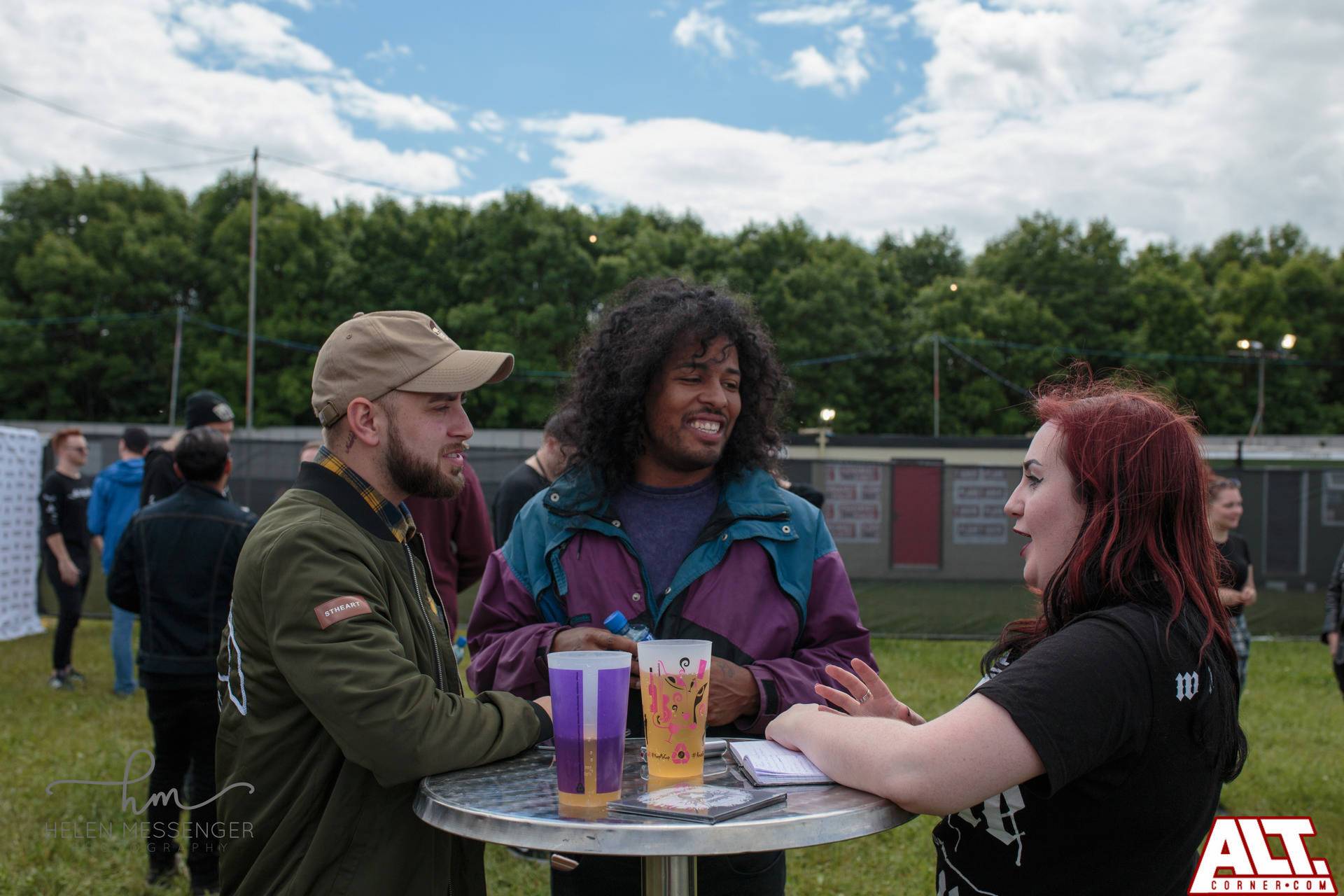 Interview number one of Download 2017 is with Issues. We first caught up with the band at Slam Dunk 2016 (check it out here) and this time, we get co-frontman Tyler Carter and bassist Skyler Acord to talk festivals versus headline shows, Amy Winehouse and Jack Black covering Issues and Tyler’s happy place.

Is there anyone that you’re looking forward to seeing?

Tyler: We’re only here tonight but I’m most excited for System Of A Down (Sky agrees). One of the first albums I ever owned as far as rock and roll, once I crossed over, I was like a skater kid and one of my buddies made me a mixtape of songs I should get into if I wanted to be a legit skater boi. I think one of the first songs on that was Toxicity. I think one of my favourite rock songs of all time has to be Question! I’ve always wanted to cover it, I actually plan to get a tattoo dedicated to that song.

Sky: Unfortunately we already missed them but I was really looking forward to seeing Northlane.

We managed to catch a little bit of their set and they were so good!

You’ve played a few festivals here in the UK and obviously headline shows, which do you prefer? Festival or headline show?

Tyler: I love festivals but I would love to headline festivals! That would be the best!

Sky: I think when you have a whole lot of one, you miss the other. In the UK for the past couple of years, we’ve had a whole lot of festivals! So next time we come over, we’re gonna really try to do an actual tour.

The last time was when you toured around Slam Dunk last year?

Sky: That’s the thing, if you tour around festivals, people just go to see the festival so you don’t really invest in production, you don’t invest in the tour.

Tyler: If we don’t do those few little shows around it, then it’s almost a hard financial loss to just come and do festivals but you’ll do what you can because you dare not miss a UK festival if you had the opportunity!

It’s just a good opportunity to bring in new fans that might not have necessarily listened to you. You said about trying to do a tour, are there any plans for you to tour here sometime soon?

Sky: Nothing solid, just ideas and hopes and attempts.

Tyler: Yeah, we’re just gearing up for Asia at the end of the summer and we’re gonna end in Hawaii so we’re going to have some vacation time to reflect on what we’re gonna do next year and just see what’s going to happen next. We will do a headliner in the states though, a Headspace headliner in the fall that we’re going to announce in a couple of weeks. There might be some dates some UK fans want to come over, fly over for a trip to the states.

Yeah we’ll try and fly over.

Tyler: I think we talked at one point about doing almost all our entire catalogue on the tour. We’re looking at maybe even doing 20 songs! If you’re from the UK, it’ll definitely be worth the trip we think!

We’ll definitely have to come over! We’ll charter a plane and just fly over and catch some of the shows (laughs).

Sky: A UK tour in the states!

Yes, that would actually be a really good idea! You released Headspace last year, are you working on a follow-up to it? It was an amazing record!

Sky: There have been whispers. That;s kinda the point of Hawaii to figure out the vusion. Anytime we release an album its such a big step for us and a turn left. There’s gotta be a lot of intent behid the direction and this time, instead of coming out with something that sounds like a kaleidoscope, throwing a bunch of words at a wall and seeing what sticks, we’re gonna try and get a direction. Like really come out with a good album that’s just going to be dope front to back!

I’m sure you’ll have no problems doing that!

Judging by everything I’ve heard from you guys, you’ll have no problems really!

Sky: Well I appreciate that!

Do you have a favourite song that you’ve ever recorded?

Tyler: I don’t know. Actually one of my favourites that we’ve recorded as Issues was Home Soon (from 2016 album Headpsace). That was a really fun performance for me.

Sky: Yeah, you got to get all Nelly on the bridge!

Tyler: I got to do a lot of different things with my voice on that song!

Sky: I think my favourite as far as song writing and seeing the song develop is Slow Me Down (also from Headspace). When Slow Me Down started, it was so incredibly different and when we all just threw our stuff in the mix and it just kept developing and developing and developing and levelled up to the song that I love. I love playing that song! It’s just the fact that it drops down an octave at the end and the fact that it gets super emotional in the second to last chorus. All these little tiny bits that I don’t know where they came from but I love that song!

There’s a new Punk Goes Pop record coming out in July, a while back you covered Boyfriend by Justin Bieber, if you have to pick a current pop song to cover, what would it be?

Tyler: yeah Slide by Frank Ocean is a really good one. I don’t know, there’s so many newer songs, I think Niall Horan’s Slow Hands (proceeds to sing a snippet of the track). It’s super groovy!

We’ll flip the switch as well so if you could have one artist cover an Issues song, who would it be and what track?

Sky: I’d like to hear Jack Black do Slow Me Down. That’d be sick! I’m so bummed out he’s never put out a serious album!

We always end our interviews with some random questions; how many tattoos do you have and which has the most meaning?

Sky: Hold on! (counts tattoos) I think I have 5, the one that has the most meaning probably is the Pokemon psyduck wearing corpse paint on my thigh cause my nickname is Skyduck! Actually for real I have Stevie Wonder lyrics on my side that are pretty sweet. Those are probably the ones. From Secret Life Of Plants, it’s a great song!

Tyler: I have too many tattoos.

If you have to describe your current mood as the weather, what would it be?

Tyler: As the weather? Oh my gosh, well currently, I’m feeling pretty mellow but I would probably say a nice breezy, hot, sunny day in Hawaii or like Venice Beach Los Angeles. That’s my happy place if anybody needs to know.

I wish we had somewhere like that we can go!

Sky: (laughs) yeah not much around here! I’m into it though, I’m team grey!

What would be a good theme song for your life?

It is a good song. What is your favourite Pokemon and why?