We chat to Miss Vincent about Cold Hands and new EP Somewhere Else!

Southampton punks Miss Vincent are set to release their new EP Somewhere Else on May 19 via Uncle M. We had a chat with frontman Alex Marshall and guitarist Laurie Pattison about their new single Cold Hands, the EP, touring and reading through the iTunes Ts&Cs everyday for the rest of their life…. You release […] 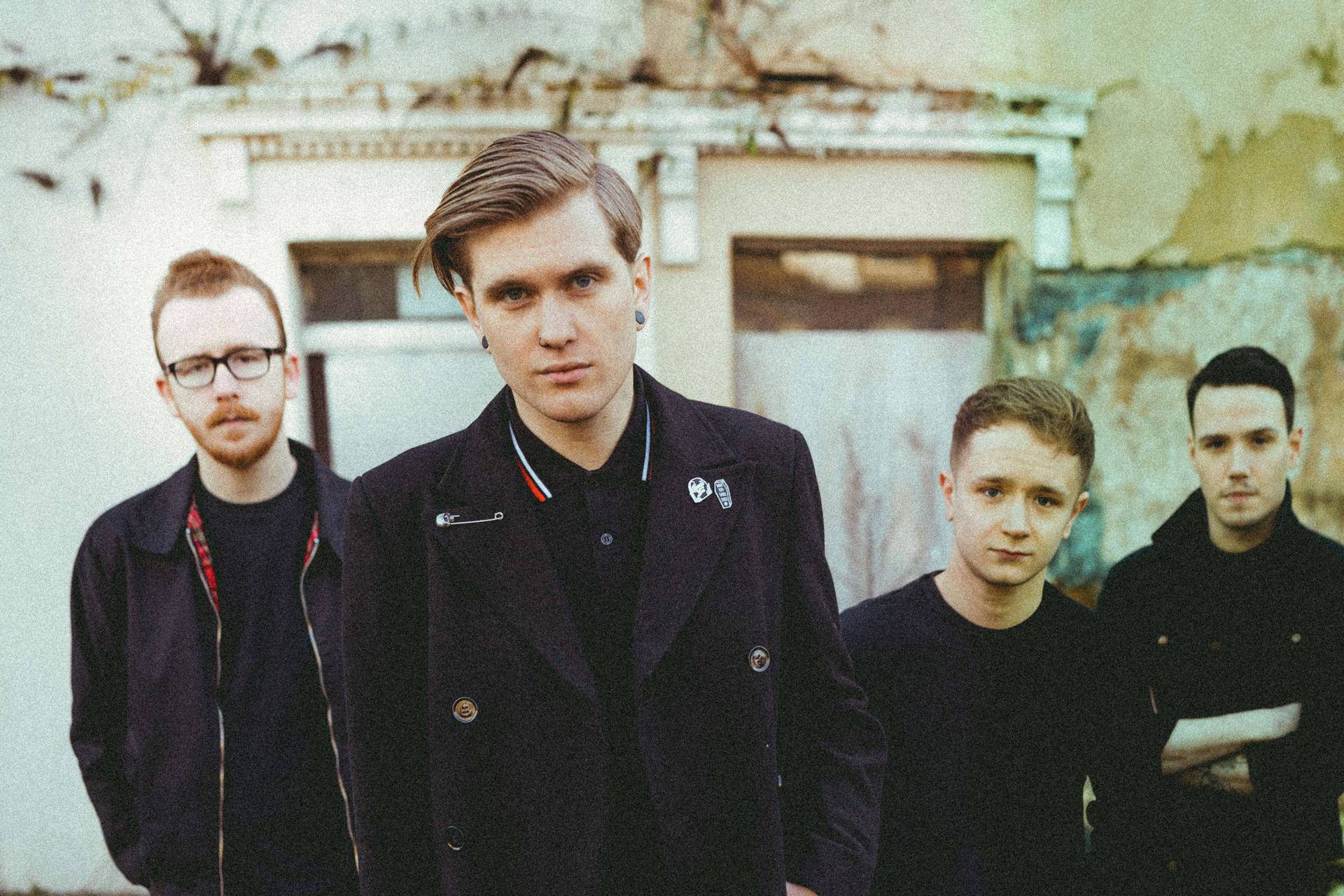 Southampton punks Miss Vincent are set to release their new EP Somewhere Else on May 19 via Uncle M. We had a chat with frontman Alex Marshall and guitarist Laurie Pattison about their new single Cold Hands, the EP, touring and reading through the iTunes Ts&Cs everyday for the rest of their life….

You release your new EP Somewhere Else on May 19th. Are you looking forward to getting it out there?

Alex: Absolutely. We’re so excited to finally have it out in the open. We recorded it what feels like ages ago now, so we’re at that stage where it feels weird for them to still be ‘new’ songs. We’ve lived and breathed them for a long time, and we’re so proud of the whole EP.

How do you think this EP has progressed from your last record Reasons Not To Sleep?

Alex: Well, something happened with this EP. It’s hard to put a finger on it – we deliberately took a lot more time to refine the songs and the sound, and really ask ourselves what we wanted to do. I’ve always been a spur-of-the-moment songwriter, and whatever comes out just comes out. But here, we made sure to take a much more in depth approach to how everything fits together, and what we ended up with was a sound that made a light go on in my head. This EP is the sound I’ve always chased after, and everything fits together so well. We let a much broader set of influences shine through, because although we were very proud of our Reasons…, we wanted to capture all of the things that we love about rock’n’roll music and make it a statement of identity. Some of the influences you can hear easier than others, like Against Me and The Gaslight Anthem. But then, I was listening to so much Elvis Costello, Sun-era Johnny Cash, and The Cure, and although you probably can’t hear those as readily, they had such an impact in the way I went about approaching writing songs. Lyrically, this is a much more direct record. I’ve never been good at saying exactly what I mean, and in the past I’ve always relied on metaphors and all sorts of situational ambiguities to try and get my point across. This time, I just wrote down exactly what was in my head. Say what you mean, mean what you say.

Lawrie: I think this record is much more direct and immediate than anything we’ve done in the past. We’ve kind of grown into the band that we are now over the years and this record isn’t just a milestone but also something of a turning point for us. Each time we’ve released an EP there’s always been one song or one idea that’s stood out to us and almost acted like a stepping stone to the next record. It’s hard to know how it looks from an outside perspective but I can definitely see a bit of a musical road map from our first EP to where we are now.

Can you tell us a bit about the inspiration behind new single Cold Hands?

Alex: Cold Hands is about how sadness can become a real habit forming behaviour, and in that respect, it can be addictive. You find yourself in a cycle where it becomes your default reaction to most situations, and it can seem impossible to break out of. It warps your perspective and it can become quite a controlling influence. You get to the point that you feel like you’re being followed around by it, and it’s constantly waiting to jump in and fuck everything up.

But, Cold Hands also looks at the ways that I try and break that cycle, how I try and regain some perspective, and not get down on myself for getting sad about how I’m sad all the time. Music can be such a great voice for mental health, but I want it to be more than a speech on stage, or a tweet full of platitudes about “talking to someone”. There are so many ways to remind you that there are good things in the world, and organisations and structures that can help you find what you don’t think is there anymore. I’ve used and do use a lot of them, from CBT, to Mindfulness, and loads of other types of aided self-evaluation, and through charities like MIND (http://www.mind.org.uk), CALM (http://www.thecalmzone.net), and larger organisations like The Samaritans (http://www.samaritans.org), you can find the best solution for you. It’s always a process, but understanding that alone is a big step. Ultimately Cold Hands is about my determination to stay focussed on the process.

Are you looking forward to the EP release shows?

Alex: These are the biggest headline shows we’ve done so far, and I can’t wait. Our first London headline show was at the end of last year in this amazing tiny basement venue in Camden, and we managed to sell it out. And Southampton is our nominal hometown because Lawrie and Owain live there, and it’s always been the place we’ve been made to feel most at home. So this time round, we can’t wait to bring the new songs along. We’ve only played 4 shows this year, which has been torture because as a band, touring is our favourite thing. So there’s a lot of pent up energy waiting to come out. (of course we’d love for you guys to come and hang too!)

Lawrie: Absolutely. The release of ‘Somewhere Else’ and these two shows are the start of a new chapter for us and it’s a chapter we’re very excited about. We’re doing some new things and we’ve put more thought and effort into our live show than ever before so I’m looking forward to seeing it all finally come together.

Do you have plans to do a full tour in support of the EP?

Alex: For sure. We’ve got a full tour in the diary that I can’t talk about yet, but we’re so, so excited to get it announced, because we’re heading out with a truly incredible band. We’ve always been a pretty hard touring band, so once the EP is out we just wanna get on the road and stay there. Watch this space!

Can you tell us your favourite track from the record?

Alex: Oh man… Not really. That’s like choosing your favourite kid! I think if I had to choose one right now, I’d say Cold Hands. It was the last song we wrote for the EP and was one of the ones that really ignited what we were finding as our sound. But I love them all – The Lovers was borne from my love of Edgar Allen Poe poems like Tamerlane and Annabelle Lee, and my fascination with The Lovers of Valdaro, so it feels special. Lost and Forgotten is a defiant song that came from a chorus I wrote 10 years ago, so I’m proud that it gets to see the light of day after all this time. Beauty in Darkness is the first proper slow song we’ve ever written, and I love remembering the process of writing and re-writing it like 10 times. And The Western Shore is probably the most anthemic thing we’ve ever written… Hell, that’s a hard question.

Lawrie: I think as Alex writes the majority of the songs they’ve probably got a little more sentimental value to him which makes it harder to choose. For me, it’s easy – The Lovers. It’s my favourite song we’ve ever written and it’s a lot of fun to play live.

Do you have a favourite memory from the band so far?

Alex: There are so many. Playing with some of my favourite bands like Bayside and Calabrese, so many memorable shows and nights on tour. I think if I had to single one out, it would be touring with FVK last year. They were the best dudes, and made us feel so welcome and it was just the best tour we’ve ever done.

Lawrie: This isn’t a specific memory but basically just being in the van on tour. Doesn’t matter which tour, doesn’t matter where we’re going. Some of the best times we’ve had together have been in the van, talking shit, laughing until our throats are sore.

Alex: iTunes T&Cs, no question. I could just make it part of a morning routine and then get back to smashing through Alkaline Trio records. I don’t think I’d last very long without music. That’s nothing against Nickelback, because I think they get a lot of bad rap that they don’t necessarily deserve, but without the bands I love in my life, things would get dark pretty quick.

Lawrie: iTunes T&Cs. I love a bit of ‘How You Remind Me’ but I’d see no point in living if I could never listen to Brand New again.

You’re going to join the circus, what would your act be?

Alex: I am the clumsiest human on earth, so I’d probably have to be a stage manager or something. If I had to be on stage, I’d probably go for something like lion taming. I’d just feed them shitloads so that by the time we hit the stage they don’t want to eat me.

Lawrie: Fire breather. Not that I can do that, but it’d be cool wouldn’t it? Jack can juggle so maybe he actually should join the circus?

You have 24 hours left on Earth, what will be the first thing you do?

Alex: Haha, this could get wild… I’d go and buy a truckload of hugely expensive guitar gear probably. I could give many more rock’n’roll answers, but those probably aren’t very interview friendly!

Lawrie: Am I dying or actually leaving Earth somehow? If I’m dying I’d probably just call all the people I care about. If I’m leaving for Mars or something I’d buy loads of cool stuff using my credit card because I’d never have to pay it off. No debt collector’s coming to knock on my door on Mars.