A chat with Frank Iero at Slam Dunk!

We sat down for a chat with the lovely Frank Iero of Frank Iero & The Patience prior to his set at Slam Dunk Midlands 2017 to talk about latest album Parachutes and plans for 2017 (and 2018). This is your first time Slam Dunk appearance. Are you excited to be here? Yes! I am! […] 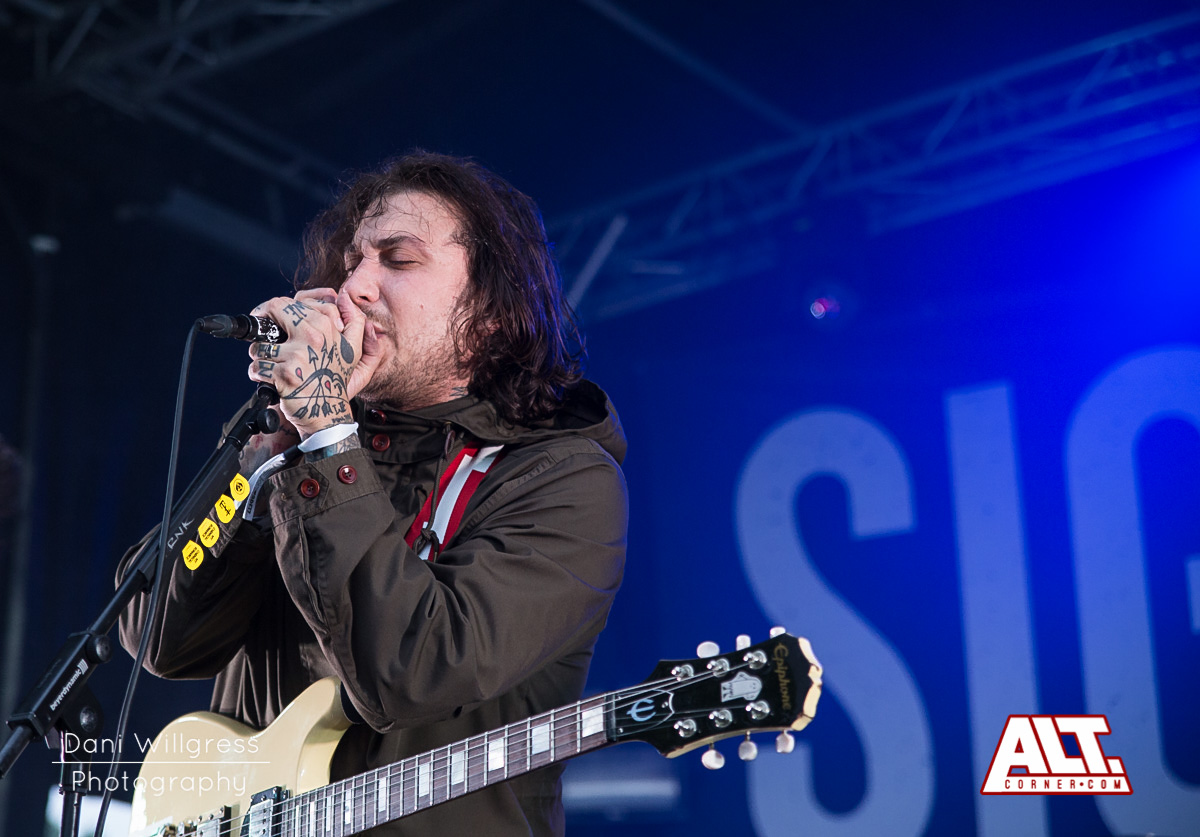 We sat down for a chat with the lovely Frank Iero of Frank Iero & The Patience prior to his set at Slam Dunk Midlands 2017 to talk about latest album Parachutes and plans for 2017 (and 2018).

This is your first time Slam Dunk appearance. Are you excited to be here?

Yes! I am! We flew in yesterday and I really thought that we were playing yesterday until we got to the site and I was like “oh, wait what’s happened? There’s no show tonight?” and they were like “no, you’re off tonight, its tomorrow”. So I was like “oh okay” and we ended up actually seeing The Specials down the street and then went to go and see Alien. So so far it’s been awesome. I woke up super late today! Which I had no intention of doing, I was hoping to get up early and do a bunch of stuff and that’s basically talk for ‘I’m sleeping until two’. So I woke up at like one thirty and then went to go see Milk Teeth which was great and now I’m here. So far, I feel like that’s been pretty productive!

It is productive, you could have just stayed in bed and rocked up just before you were meant to be here so it was productive!

I could have yeah! But nah, there’s so many friends at this festival. I’m really excited. Our whole stage, I feel like are bands that we’ve either toured together or like are friends of friends and it’s like a big hangout.

These type of festivals usually are, everyone knows everyone in some way.

Yeah. I mean some festivals aren’t like that, some it’s like a prison almost, you’re thrown together with a bunch of people you don’t know and everyone is trying to size each other up but this feels friendlier, it’s nice. I like that.

Is there anyone in particular that you’re looking forward to seeing?

Yeah! Like I said, basically everybody on our stage is someone I’d buy a ticket to their show, but yeah Milk Teeth, The Bronx, Against Me!, Sorority Noise, Citizen.

Cool! You released Parachutes in October, how have you found the reaction towards it?

It’s been amazing! We ended up having a shitty accident right before it got released and I didn’t think that I was going to have the opportunity to play any of those songs to be honest. I didn’t see us ever playing again, so to be able to now have that record out and get to play the songs, I remember the moment in writing each and every one of those songs, thinking ‘oh wow, I can’t wait to play this live, I think kids will react to this line or to this part’ and wanting to see how it moves someone. Now I get to see that which is unreal, especially because I didn’t think I was ever going to see it.

The accident was quite nasty, it’s great that everyone is now okay!

It’s really good news. Can you give us an insight into the inspiration behind the album?

We finished the touring for Stomachaches which was a record that I had just written songs and ended up putting together in like “oh you wanna do a record yeah?” And then I was touring and shit, now I have this project that I didn’t think was going to happen. So I sat down to write a record which I’d never really done before, you know? And I started to think about life in general and what it all means and how we’re kind of basically thrown out of this plane and we find ourselves at this fall basically. The moment that you jump, you just kinda get the countdown is on, there’s all this out longer than others, you know, we fought longer than others. It’s not that it’s over in the blink of an eye. We get to just experience the fall of it and the things that come along the way just kinda slow that fall down, they make us hover a little bit and enjoy the view, so to speak. So whereas on the first record, I tracked every song back to a feeling of illness, this record is, every song is basically something that kinda came in and saved me a little bit and let me really appreciate stuff.

Which ties in even more then after the accident. Does that make it even more emotional, that’s not the word but kind of like emotionalish, to play the songs live?

Yeah. I know what you mean. I think what happened is, it evolved. It almost felt like I had written this letter to myself to read after accident kinda thing. I listened to the record after it happened and I was like “oh my God, this means not just so much more, but it means different things to me now” and it really did help me get through it, which is amazing. Everything happens for a reason I guess it’s the same. Sometimes I think the big thing about this record and these songs is that we say that big things happen for you instead of to you and that’s kinda how I think with the accident as that.

That’s a good way to look at it. I know this is a near impossible thing to answer but do you have a favourite track on Parachutes?

Oh [it’s impossible?] Glad you’re asking it then (laughs). Sometimes it changes, I love them differently and for different reasons but I think my favourite song to play live is I’ll Let You Down.

That is actually my favourite.

Is it? That’s awesome! The reason I like that song so much though is because it never was supposed to be. It was a song that I wrote on an acoustic guitar and just assumed it was going to be an acoustic song I would play if I ever did an acoustic show. Then our time in the studio got backdated from when we were supposed to record and we were in our rehearsal lock out and I was like “well we got this extra time, let’s try this” and we came up with an arrangement that would work for the band, wrote a bridge to it we played it and I was like “oh wow, there’s something here!” So when we played it for Ross when we got in the studio, he loved it, we did it and it ended up becoming my favourite song on the record, it’s like “oh my God shit, if we didn’t have that extra time, if we’d have gone at the time we were supposed to go in, this would never have happened.” These things kept falling into place, they seemed like inconveniences at first and ended up being the best things that could have happened.

That’s really cool! For those who have been living under a rock, what can they expect from a Frank Iero & The Patience show?

Oh man! Those are always the hardest questions for me ‘cause I don’t know. I don’t know what it’s going to be like until I get up there. I think that the greatest thing about the set is that it’s very in the moment and each set is different than the last. I made the set list for this festival based on what I wanted to see at the festival. There’s a pretty good mix of new and old, it’s definitely going to be all killer, no filler. As far as a Frank Iero & The Patience set in general, I think you can expect us to give our all and leave it all on stage but it’s definitely from the heart and nowhere else.

Okay let’s see! So after this weekend, we go home for about two weeks, then we do some headline shows in the US. Then we do a tour with Deftones, Rise Against and Thrice. Then, there’s things in the works that I can’t talk about unfortunately. But there is going to be more touring, I would imagine to see us in the UK around the fall maybe, hypothetically, and then there’s more touring, probably until winter and then in January, we’re playing with Taking Back Sunday in Jamaica for four nights.

Damn. We always end with some random questions; if you could bring one person back to life, who would it be?

An embarrassing story? Oh my God no, why would I do that? But I will tell you this one cause I just heard this but Chris from Milk Teeth today he sneezed and shat himself at the same time. He told a bunch of other people so I figure it’s okay to tell that story! But yeah, that saves somebody in my band and also tells an amazing story that I didn’t know was possible to do.

Oh man, thank you for reading this, also I hope to see you at a show. I really enjoy going to festivals and playing festivals, sometimes they’re more fun than other times but I feel like it’s a really good way to experience different bands in a setting where people are expecting to see other bands. I think if you like a band you see at a festival, you owe it to yourself and also to the band to go see them in their natural habitat so I hope to see a lot of you at our other shows.

Thank you very much for speaking to us today.