A chat with Bullet Height in Cardiff

Berlin based electronic duo Bullet Height are currently on their first UK tour supporting Courtesans. We had a chat with guitarist/vocalist Jon Courtney and vocalist/keyboardist Sammi Doll to discuss shows, the title of Jon’s biography and Sammi’s ideal dinner guests…. Today’s the first day of the UK, are you excited for it? Jon: Excited? Yeah. […] 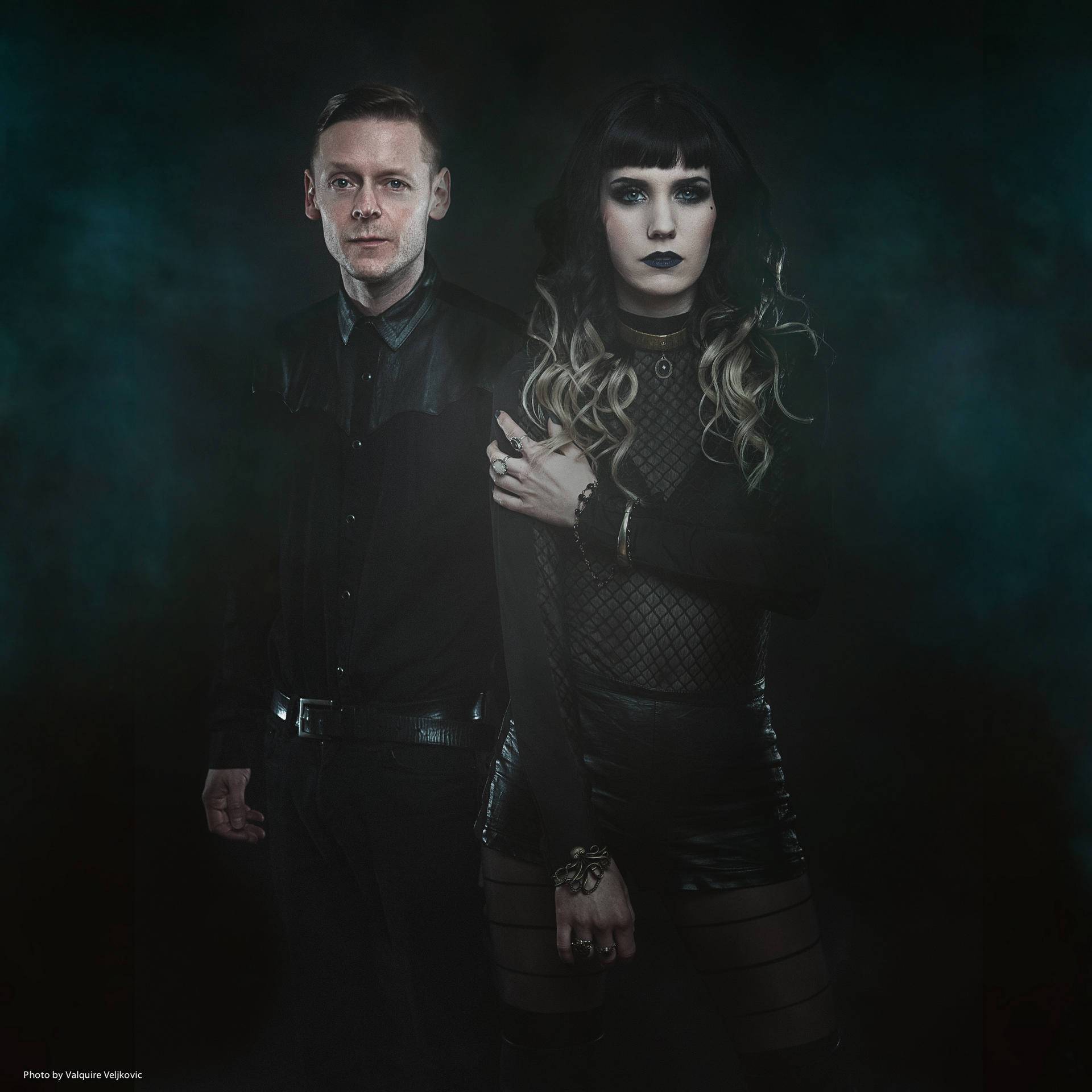 Berlin based electronic duo Bullet Height are currently on their first UK tour supporting Courtesans. We had a chat with guitarist/vocalist Jon Courtney and vocalist/keyboardist Sammi Doll to discuss shows, the title of Jon’s biography and Sammi’s ideal dinner guests….

Today’s the first day of the UK, are you excited for it?

Sammi: Yeah definitely! I think that it’s really amazing that we can finally bring our music to the UK, we’ve done so much in Europe that it’s a cool opportunity to be able to play here.

Jon: Yeah, it’s been a whirlwind, we came in last night from Berlin, slept, came to Cardiff and then that’s it!

This is the first time you’ve performed in the UK, so what can we expect from a Bullet Height live show?

Jon: What can you expect? Um.. A new rawness that you don’t find on the album maybe?

Nice. Talking of the record, No Atonement was released back in May, how have you found the reaction towards it? As it’s quite a different record to what’s out these days, but it is so good!

Sammi: Thank you. The reaction’s been very positive from everything we’ve read. There’s been I’d say a 50/50 sort of tone on it though because there’s been a lot of publications that have spoken about it going into it, coming from say Pure Reason Revolution or coming from IAMX, which are the bands that we have respectively played with (PRR was Jon’s previous band, Sammi is a touring member of IAMX), expecting it to kinda sound similar and it’s very hit and miss I think with a lot of people. But because of that, it opens the door for so many other genres of people that enjoy music. Like when we are on tour with The Courtesans for example, their fans will find something. The music is so similar but so different and their fans will find something to like about us and vice versa. I find that because… Lost my train of thought (laughs) I find that because this is a project that has been brought together by different elements that the finished product has been referenced that it sounds a lot like bands like Garbage and my personal favourites Stabbing Westward and very similar to your other band (nods towards Jon). I find that there’s something for everybody in it and then people go into it expecting one thing and they’re pleasantly surprised by what they hear. That was really a lot of rambling sorry! Covered a bunch of things that don’t need to be said (laughs)

Jon: I think the reaction’s been good on the whole.

Sammi: That’s basically what I tried to say, the reaction has been very good! Thanks Jon! This is why he should talk .

Jon’s the sum it up guy! You said there’s a range of different influences so what, if anything, were your main influences when going into writing the record?

Jon: I don’t know, Depeche Mode, Nine Inch Nails, Smashing Pumpkins, Nirvana, Fleetwood Mac for the harm9onies, Crosby Stills & Nash for the harmonies, heavy stuff and then electronic stuff which is very good, very electronic but that’s what kinda influenced the electronic side. The heavy stuff just comes from all stuff growing up . That’s about it.

A wide range then! You’ve got the tour now and we’re coming to the end of the year, so what can we expect from Bullet Height in 2018?

Sammi: Hopefully a lot more touring! I feel like we’re just getting started, we released it (No Atonement) in May, we’ve done some festivals and this is our first UK tour so hopefully you’ll be able to expect a lot more of this in the new year!

Jon: Yeah, we’ve only previously done one-off’s really. It’s always like ‘prepare for one show, do one show’ and that’s it for another month or something. So it’s really nice to actually have a set of shows ahead of us so we can sort of hone it down a bit as we play one night and then think “okay what can we change tomorrow?” And we’ve never had that opportunity before so its going to be good to hopefully find our feet and get on a bit of a roll!

That sounds cool. We’re going to give you some creative freedom here, if you could have any artist cover a Bullet Height song, who would you pick and what would they cover?

Jon: So one of our tracks and we can pick the artist? This is a good one.

Sammi: I always blank on questions like this and then I come back to it weeks later and I’m like “Ah why didn’t I say that?!”

That would be an interesting one to hear! If we flip the switch and you can cover any one song, what would it be?

Sammi: We’ve done one yeah. We’ve toyed with one. We wanted to bring it out for this tour but we’ll keep it for the next one I think.

Jon: Shall we keep it a secret? We’ve got a couple that we’ve tried. Next tour, we’re going to do a cover!

Sammi: Just for fun but like cut it out so there’s little elements of bits of the verse because it’s quite a long song. So like a little bit of the verse and then cut it in with the second verse. It’s really long so kinda just cut out little pieces and make it Bullet Height style, I think that would be interesting. Bet you weren’t expecting that one?!

Jon: No. I talked about doing Seal – Killer. Sammi wasn’t sure, she was like “ah I’m not sure how it goes off” and I was like “ok fine” so then we decided on something else .

We always end with some random questions; if someone wrote a biography of your life, what would the title be?

Sammi: (laughs) I should have answered this one!

Jon: I dunno. It just makes me think of like negative aspects to my personality.

Sammi: That’s so where I was going, not for you but for me (laughs).

Jon: I don’t know, that’s really hard! I’m thinking of things like ‘control freak’ but its not a good aspect. ‘The Caring Man’ that’s really cheesy.

Sammi: But it fits you to a T in so many ways. It’s very simple.

Jon: ‘The Caring Man’ I’ll go with that.

Sammi: I would have gone with *sighs* ‘So You’ve Ruined Your Life…’

Jon: I’ve no idea why ‘The Caring Man’ I look after my dog very well. He’s well looked after so maybe that’s where it comes from!

Fair enough! Dogs have to be well looked after!

Jon: They do! He gets two walks a day in the park.

Nice! You can have dinner with any 3 people,dead or alive, who would it be?

Jon: Him from HIM (laughs)

Jon: Are these all separate dinner things? Or is this one big dinner?

Sammi: This would be a really interesting dinner because I would have something really nice to look at while I’m being intrigued by some really heavy existential things.

I’d have to have them separately otherwise all I’d do would be stare at Ville.

Sammi: I’d be like *puts chin on hands* ‘keep conversing’ (laughs). There you go, you got a bit of my smarts in that and then a bit of my girly side!

Sammi: You don’t know this?

Sammi: Jon, everyone knows this. There is a response to it!

There’s one ‘how much oil could a gumboil boil if a gumboil could boil oil’.

Jon: (laughs) What would you guess Sammi?

Sammi: It’s not going to make sense to anybody else (we were on table 27 in the pub).

Describe the person sitting to your right as tomorrow’s headline?

Sammi: (laughs) um ‘Local journalist’s head explodes with awesomeness after attending Bullet Height and Courtesans tour in Cardiff!’ That was well thought out.

Jon: It was good!

Sammi: I’d like to know what embarrassing stories you have of me Jon.

Jon: I don’t think I do have any! We did a show near the Czech border in Germany and Sammi had a bit of an issue with the keyboards, there was a bit of a domino effect happened. Did both come down?

Sammi: Yeah they both did!

Jon: And she kinda styled it out and just ended up playing keyboards on the floor. So was it embarrassing or was it cool?

Sammi: It wasn’t really embarrassing per say it was more like ‘Okay this is something that’s happening and there’s nothing I can do to help it’ but what the embarrassing part was is that as everything was falling, I have a bunch of triggers on my keyboards and so they were just repeating and repeating. I just ended up beating it. It was the last song anyway but as I was doing that, the triggers were going and going and going, so that was more sloppy embarrassing than anything. But yeah you just kinda play it out. I like to hit my head with the microphone, not on purpose, but like I do it quite often because I am quite active on stage so I came away with some bruises that night as well. That’s a good one Jon!

Jon: That was as embarrassing as I can think of.

Sammi: Yeah I’ve yet to do the splits or something like totally fall off stage for this band. I have yet to do that, maybe tonight!

Sammi: Live without the internet! It’s a no brainer that one!

Sammi: I’d live without all of that (internet, phones etc) because we did! And music I think because of the accessibility of computers and such, music has really gone downhill since that’s happened. I think we were doing just fine before.

Jon: The internet really screwed us up.

Sammi: Says the woman who uses a soft-synth on stage. Yeah, I’ve got no credibility there but that’s what I would choose.

Jon: Thanks very much!

Catch Bullet Height with Courtesans on the remaining UK dates below;