Charmer take on the A-Z challenge!

Ahead of the April 20 release of emo-rocker’s Charmer‘s self-titled album on No Sleep Records, we asked the band’s David Daignault to tell us more about Charmer by taking on our A-Z challenge!   A song that made you want to make music? Idk if it was one song but I used to listen to Say […] 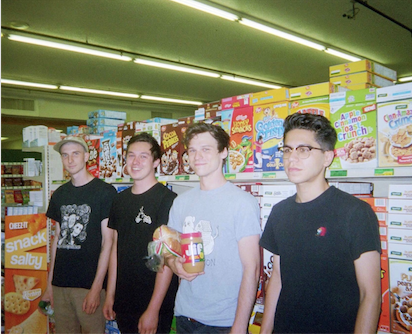 Ahead of the April 20 release of emo-rocker’s Charmer‘s self-titled album on No Sleep Records, we asked the band’s David Daignault to tell us more about Charmer by taking on our A-Z challenge!

Idk if it was one song but I used to listen to Say Anything’s is a real boy almost everyday my senior year of high school. That was the moment I realized you could write about whatever content you wanted and encouraged me to pick up an instrument for the first time

We were playing a house show In Murfreesboro TN and Julien Baker was there. She watched our set and came up and talked to me after the show. I listened to her first release so often prior to that so it was a very cool experience

Easily Pet Tiger so he stops barking. It’s like only two chords and was probably written in less than 20 minutes

My brother Grant, which we ended up doing! He tracked all the trumpet parts for this record

It’s such a broad question aha. I can’t really think of something off the top of my head.

Don’t force anything. That’s when things usually get stale

Jake Ewald! I learned a lot just from recording our LP with him. He lives a cozy functional life and still does the music thing on a larger scale level. I strive for something similar.

This could be a never ending list. Probably original Blink 182 with Tom Delonge. That would be wild

Japan! Or anywhere in Europe really.

Not a great question for me aha

Because we really couldn’t settle on anything else. We had a lot of ideas but none of them really stuck so we went the self titled route

That’s a loaded question. It’s all good. The amount amazing music there is at your fingertips nowadays is pretty wild. I’m pretty confident I wasn’t old enough to actually experience the “old days” of music

We’ve got some grinders aha

Not as of now, maybe some day?

The fact that people like our music and take interest in what we’re doing is still a pretty wild concept to me. Very thankful for them

I’m trying to think of the most pathetic zoo animal. Whatever it may be we’re that.