Charlie Manning is a 19 year-old musician who has managed to create something pretty wonderful with emotion, melody and energy blended together to create some great alternative music! Charlie is set to release debut single Light Years In Moments on May 26th and ahead of the release, we asked him to take on our A-Z […] 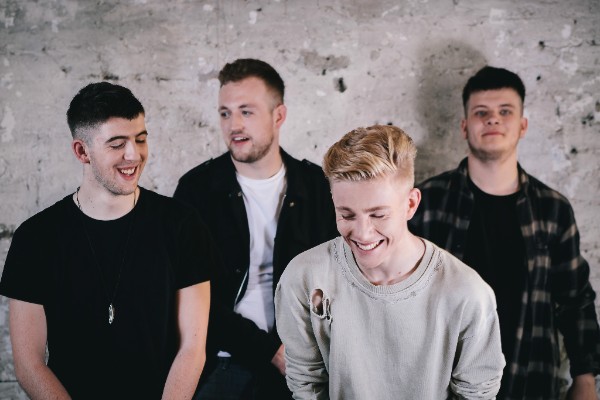 Charlie Manning is a 19 year-old musician who has managed to create something pretty wonderful with emotion, melody and energy blended together to create some great alternative music! Charlie is set to release debut single Light Years In Moments on May 26th and ahead of the release, we asked him to take on our A-Z challenge!

One song?! There’s a lot. Anything Michael Jackson, or Queen?

Best rider you ever had?

We haven’t actually had a proper rider yet, but when we do have one, for me it’s quite simple… JD, Coke, and Zara Larsson. Also, Chinese food.

Meeting Rou Reynolds of Enter Shikari before our gig at The Horn was pretty surreal. Or Sue’s (Andy’s mum) house party.

Mentally abusing, consciously deluded, can’t you see that you’ve been running from the truth with nowhere to start.

Maybe Avalanche, it’s kind of a story, so it was pretty nice to write. Or California, because it’s about my thirst for travel. I could think and talk about travelling all day every day, so I never ran out of ideas for that song.

Ughhhh… Light Years was first so it’ll always mean a lot. But we are really enjoying playing our more recent songs like Proximity, West Parade and Lost. But maybe it’s just the honey moon period haha!

Hayley Williams. Done. No one else gets a say.

Getting everyone in the same room at the same time. We literally couldn’t have more different schedules if we tried.

Oh there’s so many. Adam. Sometimes we feel sorry for him, but someone’s gotta take it.

Things like personal experiences, putting yourself in other people’s shoes and having amazing producers is a major win as well (brownie points). You’ve gotta be in the zone, you’ve gotta feel it. I don’t think you can sit down and say “right okay I’m gunna write a hit”.

Umm, as a band, it will either be Birmingham or Leicester? I played a pretty lit acoustic set in St. Ives once.

Seeing The 1975 was insane. They’ve just got it right. Or any member of Black Orchid Empire.

Arcadian were really cool, we played a show with them a few weeks ago. The Hunna? But I don’t think they’re classed as new. Black Orchid Empire. Idle Frets.

The Hunna. We met them after playing at Standon Calling last summer they were really cool. Erm, Lower Than Atlantis.

Without a shadow of a doubt, The States.

“It’ll be alright in the end, and if it’s not alright, then it isn’t the end”. If you don’t know. Get to know.

It was the first day of working together for me and Paul, and this idea I had just exploded into something I would’ve never imagined was possible. We were scribbling away and came up with this line “We’re travelling light years in moments”, and from that moment I was like, yes, that’s just it. The song itself is based around people living with mental illnesses such as depression and anxiety, and perceiving what it’s like for the people who are there for them, not knowing what it’s like, but trying to help and trying to understand. For example the lyric in the chorus sings “I can never be the same as you… bodies in motion, I feel your blood in my veins”, and this is kinda saying, yeah I don’t know what it’s like, but whatever happens I’m here and I feel you. You know?

See our asses in Camden 27th May, headlining Camden Rocks All-Dayer at Proud Camden for our Debut Single Launch Party for “Light Years In Moments”!

This is totally not a fair question! Without old music, we would not have the music we have today. Yeah I love listening to older stuff, but I think modern music has developed so much, and not only that but the way in which we consume music has developed so much, that it’s not the same at all. Like most people these days don’t go out and buy an album, they’ll just stream their favourite songs online. But I do think that it’s hard to beat actually owning a physical vinyl or cd, it just feels way cooler.

Not as of yet. I mean lighters would be cool realistically, they’d sell well at a gig. But jonnys are a no brainer surely?

We’ve had a remix of one of our tracks Dreaming remixed by an awesome DJ called Nicky Sheldon. But live, we do a kick ass cover of White Noise by Disclosure ft. Sam Smith. Come see it at the Single Launch Party, Proud Camden, 27th May.

None, we are far too sensible. But Adam cable tied our thumbs together quite recently and I still believe its broken. But we’ll see.

Alex was the one everybody thought was gunna be the late one but surprisingly is pretty good with showing up on time! We played a gig near Kings Cross once, and we were supposed to be sound  checking in like 10 minutes so I call up to see where Andy is, and he’s like “yeah sorry mate I’m just leaving, should I bring my drums?”… That was hard to explain to the promoter but all was good. Adam once had an excuse that he won some Amazon competition and they came round to film them outing loads of tech in his house so he had to be there for that and was like half hour late to the gig. He can be very spontaneous with random stuff like that. And then I like to think I’m pretty punctual. They all think I spend hours on my hair, but I really don’t…

Right. A llama maybe? Because we look all fluffy and cute but then just like that we can switch and spit in your face. I guess. I’ve never really thought about it.