Gareth spoke to solo artist Brandon Lee about this upcoming album, mosh pits and his views on playing small venues… 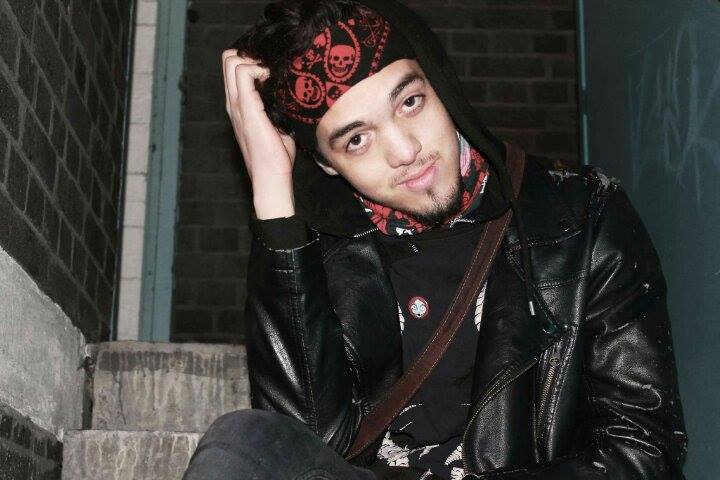 Brandon, Why don’t you tell you tell us about yourself. Yet our readers know everything about you.

Brandon: What do you want to know? I am always really closed about myself.

Why don’t you tell us about the artists you got into first?

Brandon: Funnily enough I wasn’t really into music in general until I was 8 or 9. Then I was into Busted, Avril Lavigne and McFly.

Brandon: yeah, yeah. I then got into Green Day awhile later because, MTV were doing this thing where they were playing their hits all day. I was watching it in absolute awe. In short, I went out and bought, I say bought, I demanded that my mum take me to HMV and I basically bought most of Green Day’s discography.  The Bullet and the Bible CD/DVD is something I used to watch constantly and that is what I shaped my stage presence on, I guess. My Album is also starting to sound Green Day-ish. My other big influence is McFly because, Tom Fletcher is probably the first song writer I paid attention to. I have Identified he has a style in the way he writes. So I started to try and find my thing. I started writing songs when I was about 10, they were terrible. I started writing better about two years ago. I was like, I need an identifiable style, I need to be able to structure a song. So, I basically learnt this by listening to the bands I liked with a different ear. Instead of listening to like it, I was listening to what made a good song. Most of that was 5 Seconds of Summer, McFly and Green Day.

You mention there that you are in the process of recording a new album. What can you tell us about that? Or is it still a bit Hush, Hush.

Brandon: I’m not hush, hush with anything to be honest. Only where I have been told to be. It is going to be a genre salad.

Brandon: The Album is called “Cool Kids Can’t Die” I literally got it from a picture on Tumblr which had a load of weird things over it. The words ‘cool kids can’t die’ were written on it in a sludgy font. I thought that was a cool phrase and name for my album. Even though this is album one, it’s sort of a transitional period. As I am using a lot of old ideas from songs that I wrote when I was about 10 and exploring how I write songs now. It is sort of the past 10 years of my song writing exploration summed up into an album. There is a lot of sounds in it. So “Summer Never Ends” which will be the first single off it will be straight up pop punk, with meme references thrown in. “Why I miss 2003” which I have down as the second single is a sort of pop rock track that uses 8-bit sounds. It’s a bit of a nostalgic song and I was heavily into video games from the age of 5, so I put video game sound effects into it.

So you mentioned your first single. When are we likely to see that?

You mention the music video there. I saw on Facebook that you were going to use some live performance element in your video and record at one of your gigs?

Brandon: Yeah. I have been doing that for a while. I am just looking for good bits to piece together. It’s like a lot of small music acts and stuff, it tends to be awhile before they hark back to their live and underground beginnings. So what I wanted to do is to have a proper music video with live show aspect to it because I really love playing small gigs and it sort of shows where I am from. If I get a bit egotistical in the future, I can look back at the music video and be like that is where I started.

So is there a method you use for writing your songs? You mentioned earlier that you have been harking back to when you were TEN?!

Brandon: Funnily enough I recently found songs that I wrote when I was 10 or 11. They are awful. They are about a minute long and have no real structure. I have started to rework some of them but, maybe for album two or three, which is awhile down yet. But, anything I have liked, I have wanted to use in a song for awhile so I’ve been exploring how to incorporate them. I like the idea of spending a long time working on stuff and if, I can reuse old ideas and make them better then I will. It’s like, I don’t know how to explain it. It just makes me feel good. It’s like, that bit, I did that when I was 10. And if I can make it sound good I will be proud of myself.

You said that you prefer playing smaller gigs. How do you feel about the current music scene in Manchester?

Brandon: It’s good. I like it. But, because of who I am and my music and stuff, I am like a one man boyband. I sort of appeal to the fan base of people who are into One Direction and stuff like that. I also know I appeal to a lot of punks, it’s a good mix. The only problem is because of the music industry being pretty harsh and because I don’t look a certain way, a lot of people won’t spread the word, unless you are clean shaven and have a quiff. But the upside to that is, that I will keep playing small shows for awhile and I really like doing that. While playing arenas would be great. Everyone wants that. I still enjoy small shows, they are more intimate. You can interact with people. Like at one show I pointed out someone at the back and the shoes she was wearing. I just said “I have the same shoes at home.” And then carried on with my song. You can’t do that in an arena. I love the whole interaction that comes with it.

To end the interview I like to do some either or questions. So which of these do you prefer. Mosh pits, circle pits, crowd surfing or wall of death?

Brandon: I have been involved in all of those things except for crowd surfing. My closes involvement in crowd surfing was going to an Ashestoangels gig and helping to carry Crilly across the crowd and back onto the stage. That was fun. I like mosh pits best as you sort of go at it and everyone there is on a level. If someone accidentally get hit in the face no one cares, you don’t have to worry just let yourself go.

When going to a gig, do you prefer to hear cover songs or original songs?

Brandon: Both. A bit of both cause, if I go and see a band and it is mostly covers and an original or two. I am like; do you have enough material to go out on tour with? If it is completely originals and you are a small band and not many people know you. You need a cover to get people hyped. That’s why in my set list I always have at least one cover.