Emma Wilkins caught up with cheeky chaps Blitzkreig City from Bristol as they gear up to release their new EP. The band have often been described as an indie/punk/rock mash-up, making for a pretty interesting sound to their tracks. The band is led by founding memeber Danny Pugh, who’s sheer unbridled desire to make it, maintains the beating heart of the band. On the eve of their new EP release and subsequent European tour Emma decided to catch up with them…. 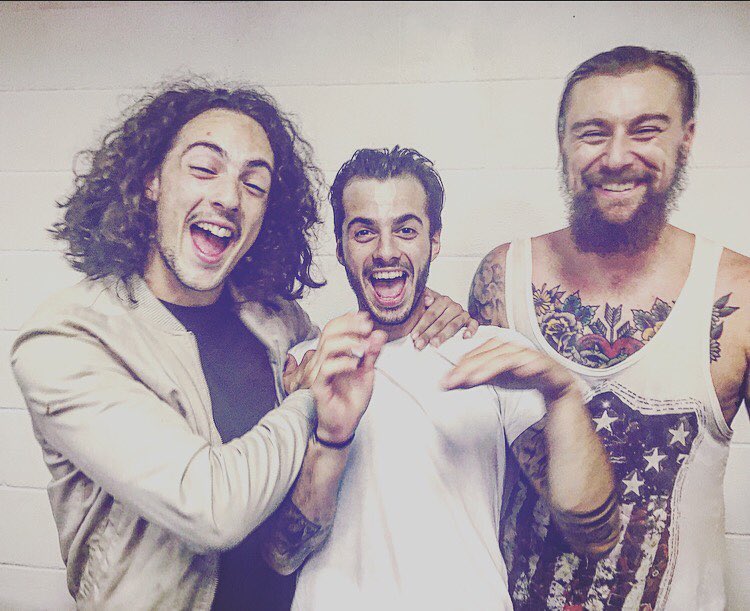 Emma Wilkins caught up with cheeky chaps Blitzkreig City from Bristol as they gear up to release their new EP. The band have often been described as an indie/punk/rock mash-up, making for a pretty interesting sound to their tracks. The band is led by founding memeber Danny Pugh, who’s sheer unbridled desire to make it, maintains the beating heart of the band. On the eve of their new EP release and subsequent European tour Emma decided to catch up with them….

How did you all meet and form a band? Any interesting facts about your new members?

SAM: Doing my classic thing of trying to talk to every single person possible at a festival, and I got chatting to this kiddy, giving it bug spuds about how I used to be in a band and I play bass etc. Then his missus called me out on it, made me give Danny my number and he called me a few days after the festival. We met for a beer, had a chat and now we are pretty much best mates forever. Gay.

DANNY: I knew Chris (drummer) from touring with his other band Scout Killers back in 2014. We had this November tour all booked up which he was going to be on with SK anyway. Then came the band problems and with all the show commitments I didn’t want to pull out of, Chris offered his soul to the mighty ‘krieg!
As for Sam (bass player) we actually met at Reading Festival this year. It was mad. I was chilling with a couple of lads from The Shimmer Band before they were to play the BBC Introducing stage, and along came this loud, vibrant, ‘in your face’ geezer wearing a glitter jacket – he offered drinks. I could’ve sworn I knew his face from somewhere in Bristol… you know… maybe he was one of them boys who you don’t like the look of when you see ‘em around town. I thought ‘oh nice here we go Mr Limelight’. Within two minutes we discovered he lived ten minutes down the road from me and could play bass. We clicked straight away. Loved the fella ever since.

How do you feel ‘Take Me With You’ EP will be received?

DANNY: With open arms I hope. I think it’s the best material I’ve written yet. It was recorded back in July which means the old band members still feature on the EP, but there is hardly any difference when playing the songs live. If anything they bring a more energetic and momentous feel to the songs!

How does it vary from your previous release ‘Away’?

DANNY: I think the songs are very much polar opposites. ‘Away’ was very bold and punk’d up. The whole EP was quite negatively written and about going through a hard time day to day. ‘Take Me With You’ is completely otherwise and the whole EP is about happiness and having a good time, and challenging the course of the predictive social reality about pulling the girls most blokes are scared of when you’re out on the piss. There’s always one trouper, a hero in the gang. Now I’m chatting shit. But yeah, this EP is much better.

Can you tell us what the main track is about and the inspiration behind it?

DANNY: ‘Take Me With You’ is a song most people in the UK can relate to I guess. Me and some friends took a quick flight to Amsterdam. No luggage, just a scarf and passport. Taxi to the red light district, straight into a dark and dingy coffee shop, and got off our heads. We then went to see Lonely The Brave and can’t really remember much after that. It became apparent that there is no other feeling like walking round the cold and wet canals of the red light district whilst absolutely wasted. Then I gave birth to this song.

What are your hopes for the tour and are you excited?

DANNY: Can’t wait to rip Berlin a new one. European shows are epic. The crowds are amazing, even when they don’t know who you are; they appreciate anything you play if you’re British and consist of guitars and drums!

SAM: I’m just really looking forward to meeting new people, picking up some fans on the way, and having a laugh with these two top lads. I’m really excited to see Germany and see what the European music scene has to offer. And of course be a right tourist, plenty of photos stood awkwardly in front of Brandenburg gate…

CHRIS: This band is a new band other than Danny and we’ve worked really hard to get where we are so this tour will cement us as band and take us to the next level of playing together. Playing in Europe is a huge deal for me; it’s always been a dream.

Have you got a funny story from touring to tell us?

Is there anywhere you would love to tour/play live? A particular country perhaps?

SAM: An American tour would be a big goal of mine, I know it’s probably a cliché, but I’d love to be driving around the states with my two muckers; avoiding Donald Trump, driving across route 66, and just being all round leather clad and dangerous!

CHRIS: I’d like to tour the world for twenty four months or so; see every country possible!

DANNY: I want to play on a glacier. Have it off on a glacier right in the middle of Australia.

We always end our interviews with some random questions so let’s get stuck in!

Dominoes or a cheeky nandos?

DANNY: If I was dying of starvation and that was all that’s left, I’d find a weapon to put myself out of misery

DANNY: Smaller. Even when watching other bands, the smaller venues are heroic!

SAM: Love a small venue, the intimate shows are the best. I’ve been lucky enough to see Kasabian at the Garage in Highbury; 2 years back, proper gig that!

Ever been in trouble with the law?

SAM: Only the fashion police. I wonder if we’ll look back in ten years time and think the same; WHAT WERE YOU THINKING!!?

CHRIS: Ha! My youth was littered colourful but that was like a thousand years ago. I’m an Angel now.

Number one thing that makes you rage?

SAM: Ignorant and/or ungrateful people. And swans – arrogant fucks. I hate the way they quite literally “swan about”

CHRIS: Skateboards and Henry Hoovers! Why? I don’t know! I just hate them! I’m getting angry just thinking about them now. Grrrrrrrrr!!!