As It Is Chat to AltCorner

As It Is released 2015’s Never Happy, Ever After, an album that not only was adored by fans and critics alike, but also led the band to tours in UK, Europe and America. Gareth Rooke caught up with Ben and Patty in Glasgow as the band was in the midst of their headline UK Tour with Jule Vera and With Confidence. Here is their chat in all its glory… 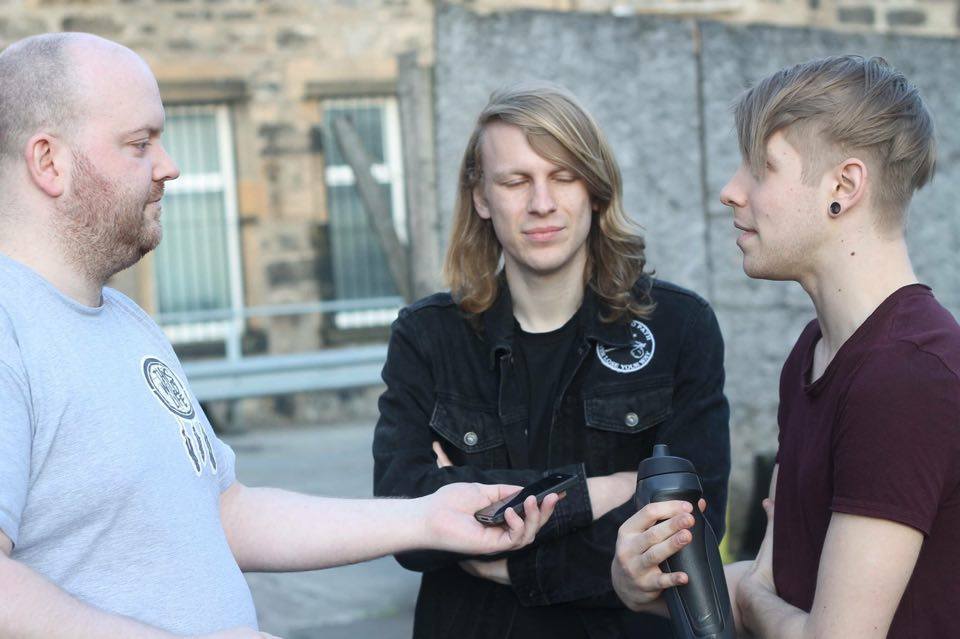 As It Is are a band who wear their influences on their sleeve, combining the backbone of early 00’s emo with modern pop choruses. Having formed in Brighton via Minneapolis, the five-piece signed to Fearless Records in 2014, signalling the full circle for a bunch of guys striving to make a success of their musical endeavors. Following the signing, As It Is released 2015’s Never Happy, Ever After, an album that not only was adored by fans and critics alike, but also led the band to tours in UK, Europe and America. Gareth Rooke caught up with Ben and Patty in Glasgow as the band was in the midst of their headline UK Tour with Jule Vera and With Confidence. Here is their chat in all its glory…

So guys how has the tour been so far?

Patty: The tour thus far has been wonderful.

Ben: Yeah, the shows have been amazing. It has been a while since we have done any headline shows, so it’s nice to be playing purely to our fans for a change.

Patty: The crowds have been fantastic. The bands we brought with us on tour (With Confidence and Jule Vera) are incredible people. It has just been a fun time in general.

You mention there about playing to your fans. How do you find your Scottish fans?

Ben: For the lack of a better term, absolutely mental. Bat-shit crazy.

Patty: They are amazing. Always so supportive, energetic and enthusiastic. I think what summarizes it best is when, With Confidence had a wild crowd last night (in Aberdeen) and the Glaswegians at the show apologized and said “I am sorry it wasn’t good enough. The Glasgow show tomorrow is going to be sick.” So I am a little bit fearful about how wild it’s going to get tonight.

Ben: I am really excited about it. Glasgow has always been one of our favourite places to play.

Patty, during the show you always like to slow things down for a moment to talk about issues that people have and the troubles in their lives. Is that something as a band you find really important to raise awareness about?

Patty: Yes and no. It’s one of these things where I don’t script what I am going to talk about. It is just about what is pertinent to me that day. I think the songs we write are kind of therapy to us and our escapism from our life, and the stuff we all deal with about our own selves. I think that is what the fans like about our lyricism of our songs. So, when I get up on stage and talk about it, it is relevant to that. We are not preaching it or anything. It’s like having a conversation and I want it to feel less like me talking to a crowd and more of a back and forth conversation.

You guys have always had a good interaction with your fans. This started with the YouTube cover videos you (Patty) started three years ago with the interaction starting on the comment section of the videos. Do you think YouTube is a good way for bands to get themselves out there? Whether it be cover or doing their own songs?

Patty: I think YouTube and in general, social media. Is the single best tool a band have to promote themselves. Especially in their early stages because, the world is listening. Their is no finite reach you can have when you are posting to the internet. I think it would be ludicrous to deny yourself something so incredibly beneficial.

You guys are off to play Slam Dunk this year. How important is it to you guys to play festivals like Slam Dunk?

Ben: I personally have been going to Slam Dunk for five years. So to get to play it for a second year is just amazing. I have so many good memories of going to Slam Dunk and seeing all of my favourite bands. . Getting to share the stage with The Starting Line is ridiculous. It is something I never thought I would get to say. Slam Dunk has always been my favourite weekend of any year, without fail. And this year we have so many friends playing in so many different bands, it is going to be a great weekend.

Patty: We added a song which was ‘Winters Weather’ but, we also added three acoustic tracks. We liked the idea of adding textures and layers to the songs, kind of re-writing them so they are not just songs played on an acoustic guitar. We spent a couple of days remastering them.

Ben: We also re-imagined the art work. It was an important factor as well. It is one of those weird things, that now I much prefer the new art work. To the point where I am “Why didn’t we use this the first time around?” It is cool to just put it out, especially ‘Winter Weather‘ as we are between album cycles and it tided people over till the next record.

So you are currently writing the new album?

Patty: That is true.

Are you doing that on the road or are you waiting till you finish the tour?

Patty: We are writing on the road. We have been on this tour.

Ben: We also spent a couple of months before that just locked away writing. That is why our touring schedule has slowed a bit at the beginning of this year. This was so we could concentrate on writing and we will be straight back at it as soon as we have finished this tour.

On the album “Never Happy, Ever After” my favourite is ‘Dial Tones’ which is also a big fan favourite. I was wondering what is the meaning behind that song? Where did it come from?

Patty: That song was written relatively late into writing ‘Never Happy, Ever After’. We had spent a couple of months away from our girlfriends and our families. We have never been away from those people for that long so there was that weight hanging over us, there was also the guilt of doing something that we loved and fulfilled us but at the same time was hurting the people we love because we had removed ourselves from their everyday lives. This is what the song is basically about. It was about coming to terms with not only what was happening now but what was going to be happening for the foreseeable future, one of the blessing and curse that come with doing this. There was a lot of loneliness and hurt we and our ladies felt when that song was written, and that is what inspired ‘Dial Tones‘.

I like to end the interview with a few either or questions so which do you prefer: mosh pits, circle pits, crowd surfing or wall of death?

Patty: For myself its just seeing what the crowd does when I am up on stage.

Patty: I would agree.

And last but not least: Small venues or large venues?

Ben: I love playing to as many people as possible. But, when you play a show like we did last night in Aberdeen to two hundred and fifty people with no barrier, you can’t beat that intimacy, that sweat-box of a venue. That is a really hard question to answer. Both have very different vibes and fulfill you in different ways.

Patty: For an entirely selfish reason, big venue. So I can do my mic swings. I am missing them a whole lot on this tour!

Ben: Dude that is a point. The space you have on stage at big venues to do spins and stuff is fun.