An Interview With Hieroglyph 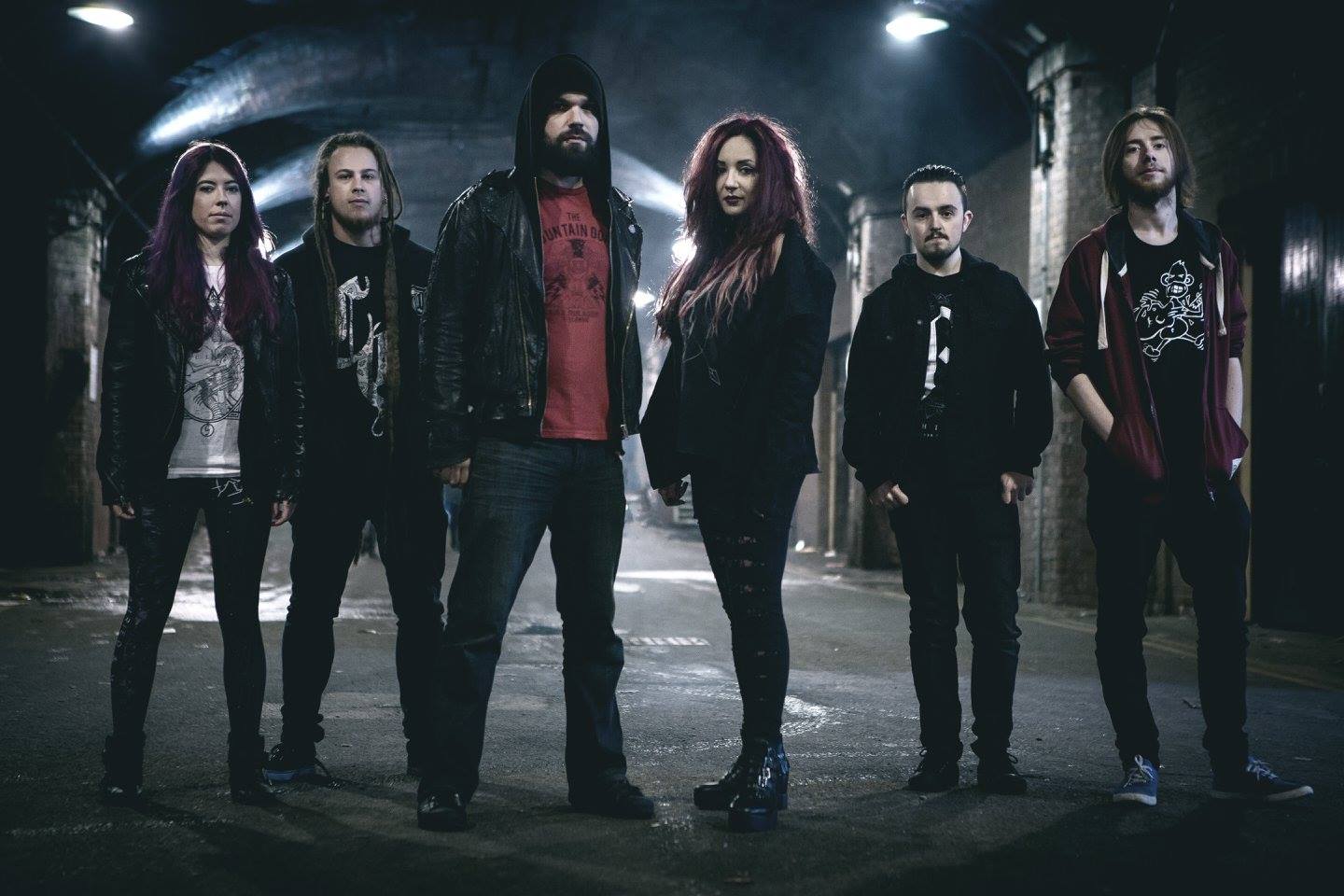 Hieroglyph are a Progressive Metal band based in Leeds/London who have recently released their concept album OUROBOROS, which is based around the story of a rise to consciousness and higher thinking that is encoded into the first 11 Tarot cards, the Major Arcana. Here is our interview with them! 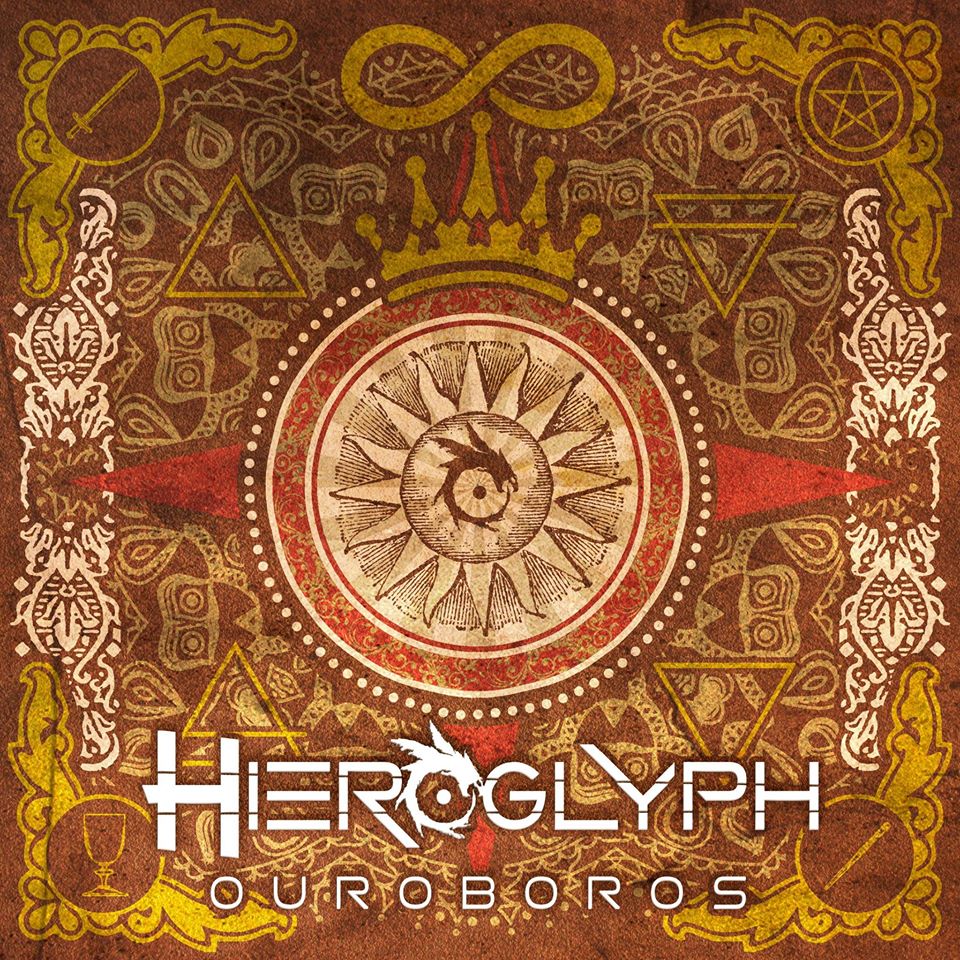 Hi guys! Firstly, where did the idea come from to base the album around the first 11 Tarot cards?

Mark: I’ve been interested in and learning about esoteric and occult symbolism for a few years, when we were kicking ideas around for the album it occurred to me that the encoded symbolic story of the path to higher consciousness would make for a good concept, also there are 11 cards in the major arcana so that helped!

Being a concept album, what can you tell us about the meaning behind each of the songs?

Each song might take too long..! But the arc of the album begins with our protagonist as “the fool” taking the first step on his journey, as the album progresses he must learn about natural law, karma, will power, embracing and combining the male and female aspects of himself and how to act in the world before arriving at his destination “the magician”. On the album Val and I sort of speak though different voices, the sacred feminine, the sacred masculine, the protagonist of course and Val acts as a kind of narrated at points. It’s strange and very organic how we write I don’t think we’ve ever really clashed over anything..!

You’re self-releasing the album, any advice to other bands in the same situation without the backing of a label?

Helen: I think PR is the most important thing, be organised, be prepared to foot costs a lot. It’s good though because you have control over everything.

Sam: If you ask around, do some reading and weigh your options up, I think it’s a lot easier than people think to get by without a label. You’ve just got to be smart about it. In the end, you get to put your music out there and make a name for yourselves and you’re not at the mercy of someone telling you whether or not your stuff is worth putting out.

How are your songs written, is it mainly one person or is it a collaborative effort?

Sam: So far, I’ve written the majority of the music, Crown was a collaboration between me and our old guitarist Jamie and I dipped my toe into lyrics and vocal arrangement on Samsara. But generally, I’ll come up with some demos, go back and forth with the others to nail the structure, then let Val and Mark get stuck into them. In future though, I’m hoping that the writing process will be a lot more collaborative, me and Richard have been coming up with some cool stuff together.

Being based between Leeds and London, are logistics ever an issue for you?

Mark: Only for Val..

Val: Yes they are! Now that we have two cars it makes it easier for the Leeds bunch to travel around, but we are 6 grown up, big people plus all the gear, so sometimes it’s difficult to find space when we travel. I always taking trains here and there which is not the cheapest option so it becomes a bit of a hassle there too. Not even to mention how difficult it is to get us all together for practice, when we have jobs, universities, life… and so on.

Sam: It’s tricky, but we’re on top of it. It’s never been a huge hassle, it just takes a little more consideration than the average band. But it pays off I think, we’re a good little collective.

If each of you had to pick a favourite song from the album, which would it be and why?

Mark: I think my favourite is probably Mandragora.. it’s nice for me to have a sing and it’s a cracker.. I also only wrote about 3 lines on it so it’s easy for me too..

Sam: I’ve got to go with Mandragora too, it’s a big, sprawling track that shows off a lot of the different sounds and styles we use. And the end section is class, I’m dead proud of it.

Helen: Crown, because it’s really heavy and has some strong riffs and bouncy sections. I do love The Butterly too, I think it might get overlooked a bit because it’s so short.

Val: Mine is Enochian: I wrote all of the lyrics and I remember clearly the moment I wrote it, it’s really connected to me and how I feel about the current world situation. Also it’s so fucking epic. I can already imagine playing it live and it brings shivers all the time I listen to it!

Sam: I know Richard really loves Crown and Bradie loves Ouroboros, he’s really keen to play it at some point but the length of it is an issue. It would be cool though, definitely a challenge to play.

What has been the highlight of 2016 for you?

Mark: Seeing the physical copies of the album for the first time at techabilitation

Sam: Getting this album out, we’ve been at it for so long, I’m so happy to finally release it!

Val: Finally releasing the album after 1.5 years of working on it, I couldn’t take it anymore!

Helen: I’d have to agree, getting the album out and hearing everyone’s feedback on it after all this time working on it.

What can we expect from Hieroglyph in 2017?

Mark: Hopefully a load of shows! We’re probably going to do a fun EP of covers and things before we start looking towards the next album.

Sam: More shows for sure, we might finally do a tour. We’ve been chatting to some friends in bands about teaming up for some shows. Me and Richard have started writing some new bits and pieces, alongside the covers we might have some new original stuff out before the end of next year. But we don’t want to get ahead of ourselves!

If there’s one bit of advice you could give yourself when you first started out along the road to a career in music, what would it be?

Mark: What’s a career in music?

Sam: Keep ignoring everyone but maybe practise more so you’ll be able to sweep properly by age 24.

Helen: When you’re going though the worst parts, focus on the best parts, remember why you do this in the first place.

Val: Its better to wait and do things properly rather than release some unfinished shit stuff.

If there’s one thing you could change about the music industry, what would it be?

Mark: I miss CDs. It felt more like an event when an album was released, it also provided a vital money stream that’s not available really to bands now.

Helen: The attitude towards paying upcoming bands. It’s such an expensive undertaking to be in a band and starting out is when you really need that boost. But it’s hard because people don’t turn out to shows so the money to pay the bands isn’t there a lot of the time. It’s a vicious circle.

Sam: I hate hoop jumping and trying to follow trends to be current. I can’t be bothered with any of that at all, if focusing on the music alone means I’ll get nowhere then so be it. If all anyone remembers about you is your clever marketing then who gives a shit.

Having dual vocalists, one being female, do you find that more focus is put on Valentina or that you get dubbed as ‘female fronted’?

Mark: We’re not female fronted, we’re male drummer-ed. And it’s inevitable I suppose but it can get annoying when it’s everyone’s go-to description. One review from Tech fest described me as a backing singer dressed like a farmer.

Val: In the past we have been called female fronted or something similar. We always try to avoid these definitions, we are a band, we are 6 musicians and 2 happen to be women, get over it.

Sam: I think people actually do mention Mark and Val fairly equally in reviews and such, but there are a few comparisons to Nightwish that crop up, which I think is a bit lazy because we don’t sound a thing like them.

As musicians, who are some of your biggest influences?

Helen: The Arusha Accord, Deftones again and Karnivool.

To round things up, we like to have a few random questions in there! Most underrated fruit?

Val: Prickly pears. Omg I love them and in south Italy they are huge. Here nobody even knows what they are. Heresy.

Helen: Tomato, because it’s always misrepresented as a vegetable. You can’t put it in a fruit salad.

Most embarrassing moment on stage?

Mark: In Bludger I fell off my ego box and faceplanted into the stage, in hieroglyph I think I’ve swung some mics out of their cables and not noticed but it’s been fairly lucky for me!

Val: Several times when the mic slipped from the cable, or a few times when I have stumbled on my feet. No major embarrassment have happened… yet…

Sam: Any time the laptop/backing doesn’t work. You can feel the eye-rolling and sighs crushing your soul when the technology doesn’t play ball. But it’s going nowhere.

Helen: Forgetting we were headlining and getting a bit too drunk before playing and forgetting a chunk of the first song. Luckily, you can blag a long way with enthusiastic head banging.

If you could be any aquatic animal, which would you be?

Sam: Mantis shrimp. Google them, they look amazing and they can break aquarium glass with their claws.

Val: Cockroaches. I literally can’t even look at a  picture or even think about them makes me shiver.

Mark: I’m terrified about being asked about my phobias.

Sam: Waking up in that scene in Full Metal Jacket where they batter the shit out of Pyle with pillowcases full of soap, except all the other soldiers are the chuckle brothers and they keep saying “to me” “to you” all the way through.

Helen: Swimming over rocks in the sea. It just freaks me out.

Worst thing about being in a band?

Val: Compromising all the time and not being able to make good money from music.

Sam: Trying to keep six people happy and make sure everything is still objectively as good as it can be.

Best thing about being in a band?

Mark: Being able to show off on stage with your pals.

Val: The emotions that live gigs give you and happiness that people give you when they like or appreciate your stuff.

Sam: Being able to share in all this mad shit with 5 of your best mates.

Finally, what would your dream lineup for a fest be?

Head over to http://hieroglyphuk.bigcartel.com/product/ouroboros-cd-digipak to get your hands on the album!
Video for Starlight here: https://youtu.be/YuoeQ50NHtk