AltCorner Speak to Everybody Looks Famous

Back in November, Gareth caught up with Everybody Looks Famous at Garage G2 in Glasgow while they were on tour… 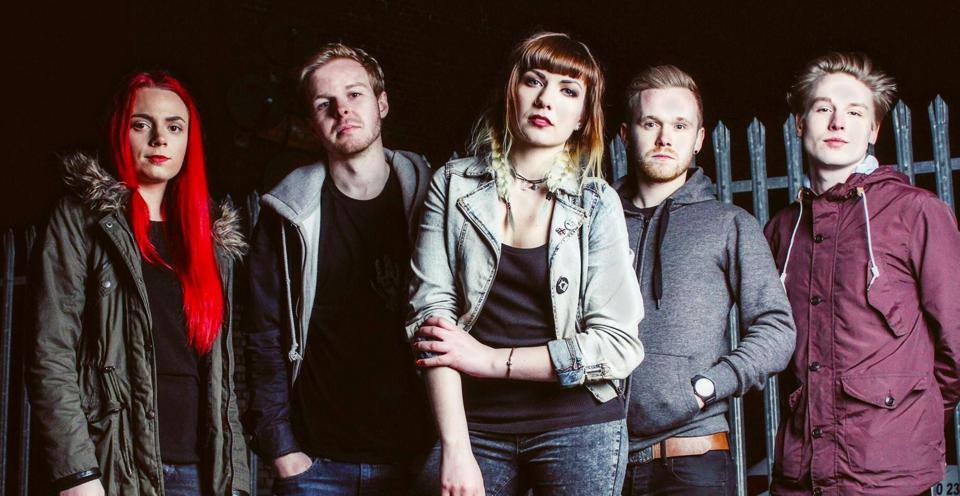 Back in November, Gareth caught up with Everybody Looks Famous at Garage G2 in Glasgow while they were on tour.

Hi guys, how are thing? And how has the tour been going as this is the last date of the tour.

Lex: It’s been really good. It’s been aweseome to play with some old friends and make new friends. And to play with Altered Sky in such a nice venue.

For those that may not have heard of Everybody Looks Famous. What do you bring to a live show that make people want to see you?

Lex: Everyone says that we are so happy, especially Joe’s smile. We bring loads of energy, I think we play modern pop-rock.

Tom: We try and make it a positive experience for everyone.

Lex: We’ll try and chuck some humour in there. Some jokes. But, in all seroiusness we will try and kickass aswell.

Joe: I feel if we are smiling then they will be smiling also.

On your latest release ‘Fiction’ you talk a lot about issues and everything being in your head. What is the story behind ‘Fiction’?

Lex: Well I have gone thought a few stories so when I tell people its nice. Well I guess there are a few bands that have done songs about obsessive fandoms. I know people can get really into books, movies or TV series and all that kind of stuff. You can become really encapsulated into this environment. So I wanted to make a song singing to those people. ‘It’s all in your head, it’s fiction’, it’s not really, it’s a different world your making it your own. It’s like nothing is real. It’s like my friend she will finish a book and will literally sit there crying there for again saying “My favourite character is dead.” and I’m like “Jeez it not real. It’s going to be ok.” And I end up sitting with her for a bit.

Tom: It’s kind of like when we first started to do it there was a mention of video game wasn’t there.

Lex: Yeah. You can get really into them, like Skyrim and them loose reality.

With there being a lot of bands using social media these days, you used to have the MySpace days with bands becoming big from that. Facebook has come and gone with that and making it harder and harder for bands to get themselves out there. We are now entering the Twitter and YouTube phase but, with it being so saturated do you find it hard to get people just to listen to your music?

Tom: The Direct approach is one of the best we have found but, you kind of have to have all your ducks in a row. You got to have your, Facebook, Twitter, YouTube and everything there so when do meet people at show or with a flyer or whatever that you got everything. You have to have the full package waiting there for them when they check you out.

Lex: It’s all about looking professional. If they can take you seriously then they will see you as a viable band to listen to.

Tom: It’s interesting with like how difficult it is for bands to get heard.  It is a big thing. If we are doing a big release we try and do everything we can to get it out there including PR. To make sure that push it in the right avenues to get it in Kerrang!, to get it on Scuzz.

Lex: You got to see what is trending.

On top of all of that you have done a few live Q&A sessions. Are they important to you guys?

Lex: Damn it! They are fun. I like watching them online and so I thought it would be fun to do it. That’s literally why. We do get asked a lot of questions at show so we thought if we had a video online that people could see that can’t come to our shows that people might find it enjoyable and a bit funny as well.

Out of all the bands that have influenced your music, and you can only choose one to play with, which one would it be?

Lex: Pierce The Veil, hands down.

(This was followed by a lot of shouting and name calling).

Lex: Actually if I could go back in time to when they weren’t broken up, Alexisonfire. Damn straight.

Tom: If you ask every single one of us we will all give you a different answer.

Grace: We would all give you different answer.

Lex: What about you Joe

Joe: I couldn’t say a band.

Lex: Duran, Duran for him.

Tom: I’m straight up 30 Seconds To Mars. And we all know Phil’s.

All but Phil: Foo Fighters.

Tom: It’s not a question you are going to get a definite answer on sorry.

Recently I have seen a cover of your song ‘Fingerprint’. How does that make you feel as a band?

Grace: I loved it. I thought it was really sweet.

Phil: It’s the first song we did as a band.

I like to end the interview with a few either or questions. So, which do you prefer? Mosh Pit, Circle Pit, Crowd surfing or wall of Death?

Lex: A wall of death is so fun! You just intimate people from cross the room.

Grace: I once crowd surfed at a Cortinas gig.

Lex: At a Cortinas gig?

Tom: Mosh pits are pretty fun to be in.

Lex: But at Download there were three curdle pits. If we could get that.

And Last Question, which came first: The Chicken or the egg?

Lex: It is egg. As lots of animals lay eggs.