A chat with Vukovi

On the eve of their final show on their ‘Weirdo’ tour we had a catch up with Vukovi, on Serbian adventures, fanfiction and milk! 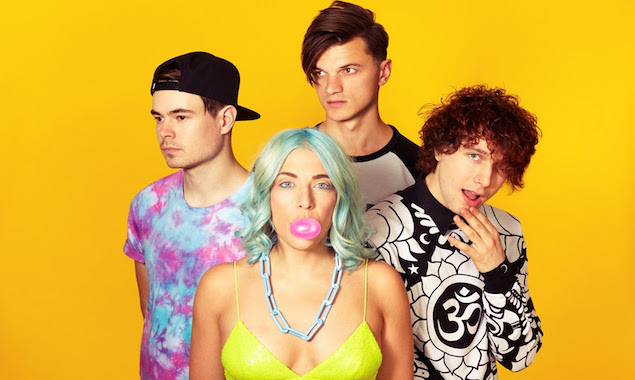 On the eve of their final show on their ‘Weirdo’ tour we had a catch up with Vukovi, talking about Serbian adventures, fanfiction and milk!

Ok, So Vukovi! Best place to start is at the beginning – where does the name come from?

Janine: Basically, I was born in Serbia, and I travelled with the circus until I was about, twelve, as a snake charmer and Vukovi means wolves in Serbian.

How did you all meet?

Jason: We should start a Tinder for bands…Bander!

So the first single off the album is ‘Weirdo’ where did the inspiration come from, for the video?

Janine: Well, the song was written before the video, but the video, the girl who played me in the video, I went to school with her big sister. We were at a Bring Me The Horizon show and we met her mum and got talking to her about how her little sister  was doing in school. She started telling me about how badly she was bullied in school, she just had a bit of a nightmare with it all really. With her being 14, it just really hit home for me, so we decided to put her in the video. From there we met up with the other 3 girls who are it and they’ve all been victims of bullying too, so we spoke about it with them.

I just don’t understand how anyone could, when you meet them and speak to them and realise how amazing they are; how could anyone want to make you feel, the way you’ve been made to feel?

So you’re all very anti-bullying and advocates of being proud of who you are, is the song itself based on your own experiences?

Janine: In terms of the video, the main character is like me at that age, because I was very alternative and in to loads of different things and got a hard time for it, but no-where near on the same level. I was lucky, I grew a thick skin from it, you go home at night and wonder if you should just do what all your friends are doing so you don’t but you should do the stuff you want to do.

I mean, yeah, the song is basically about that.

You try to fit a mould, you try and hide who you are and you feel worse. So what’s the point?

Pretty Dark stuff, but for people going through bullying or tough times, you’re all very positive influences and comfortable in your own skin…

Janine: Aye, we are all now, but these things come in time, at that age, you don’t realise there’s a bigger picture, there is a scene that they will fit in to and I know it’s easy me saying that to them but at that point they felt like it was the end of the world.

So is this where you get the ideas for all the colours and  glitter from, I’ve noticed there’s a lot of people here today in neon yellow and so much glitter?

Hamish: I remember some-one saying to me that they were at a concert and they said all they could see is this beam of light coming off one of our weirdo tshirts.

Janine: Exactly, it’s embracing it, it’s ‘Im going to wear this ridiculous stinking yellow colour into a gig, and stick out like a sore thumb.’ It’s having the balls to do that.

Hamish: I honestly thought no-one would ever wear those tshirts, because they were such a ridiculous colour.

I’ve noticed you also seem to actively encourage your fans to be creative and different, you get loads of really cool fan art and stuff, how do you feel about that?

Have you come across any amusing fan fictions or anything like that before?

Hamish: Like, fans make up their own stories with you in it, they’re usually quite…interesting

Moving swiftly on!..What other bands do you all like then? Other than your own..

Hamish and Colin: Press to MECO

Colin: Press to MECO are a really big favourite of ours and then we got an email offering us to take them on tour with us!

Janine: We were like ‘we’re not worthy’ because we couldn’t believe that they wanted to tour with us, we felt like we should have been supporting them.

Hamish: Then they were saying they couldn’t believe that we were taking them on tour, I was like ‘you have to be joking!’

So you guys have really taken off in the past year or so! How does it feel to see yourself on MTV and stuff?

Hamish: You very quickly get used to it, it’s not really weird any more.

Janine: Though it’s pretty weird when you’re having a drink with your pals and you come on the telly and everyone cheers.

Hamish: Because it was so gradual I just don’t find it weird any more though!

Janine: It was a bit of a bucket list thing for me anyway though, to see if we can get on Kerrang! or MTV, and when we did it was really cool

So how long have you been Vukovi for?

Hamish: About six and a half years?

Jason: It’ll be about seven in September? To be honest it was like, a lot of people go to university and now we’re just about getting there so it’s taken a while

Janine: I’d say we’ve only started properly building things for the past three years or so, it’s really helped having the right team around us though when we’re putting things like our singles out

Does it turn into a university style party after your shows then?

Janine: Not really, to be honest, we are so lame!

Colin: I’d say we definitely have our moments though

Janine: We have the odd blowout every now again, the odd game of twister but other than that we’re pretty chill

So, moving back to the snake charming anyway! What else did you learn in the circus Janine?

Colin: Well the snake in La-Di-Da was one that Janine brought up!

Was that your snake?

Janine: Actually, I asked on Facebook to see who had a snake I could borrow, I was actually really surprised at the number of snakes I was offered…to be honest, I just took the first snake I was offered, then as the day went on we got offered bigger and bigger snakes, I really regret not getting the albino python, that would have been really cool! I just couldn’t bring myself to tell this other guy though that his snake wasn’t big enough!

I wonder what they’d taste like? What’s the weirdest thing you’ve all eaten?

Janine: I’ve drank my friends breast milk, about two months ago? It was so amazing, really nice and creamy. She’d just had a baby and we were having a couple round hers and I saw some in the fridge and wanted to know what it tasted like!

Janine: She put it in a shot glass and I did it as a shot…so yeah, I’ve shotted breast milk

Hamish: Is it vegan?

Janine: That’s a really good point actually, I wonder if it is? because people can agree to it. You can’t really go up to a cow and say ‘mind if I eat your leg’ and the cow goes ‘aye, go for it!’ – moo once for no, twice for yes!

Janine: Ohmygod. We’ve watched those so much

Hamish: We actually watch those all the time it really kills time when we’re waiting on tour!

So going from the accents I take it you’re all from Scotland, where abouts and what’s the music scene there like?

Janine: The music scene is amazing

Colin: Just, everyone’s so enthusiastic and really goes for it, it’s definately the craziest city we’ve played in!

How about other than Glasgow, what’s the rowdiest city you’ve played?

Hamish: Corporation in Sheffield was great too! Key Club in Leeds was amazing though!

So going from there, who’s the most exciting band you’ve opened for?

Jason: Mallory Knox for me

Everyone: that was the craziest show…

And if you could open for anyone, who would it be?

Colin: Panic at the Disco!

She’s looking fab. with her new hair – would you ever consider doing a Katy Perry and cutting your hair off any of you?

Colin: I have done, I shaved mine right before a big night out and missed a patch, it looked ridiculous

Colin: Pretty much, I looked to weird with a shaved head

How about weird or wonderful tattoos?

Hamish: None of us

Janine: No, none of us have any! We’re going to get our tour manager one that says ‘life hurts’ on his knees though, it’s all he says when he’s on tour with us – we should all get matching tattoos of that. We have had quite a lot of fans getting Vukovi tattoos recently which is really cool though, it’s really weird but cool

So no tattoos of your face or anything yet?

Janine: Not yet, but Im sure something will come up – maybe I should get one of my own face?

Colin: Like Steve-O? Doesn’t Steve-O have one of himself?

Colin: Muesli because I’m NUTS… I was going to say something like sugar puffs, because Im sweet

Hamish: ooh, the one with the wolf on he front, cookie crisp?