The Offering’s playlist of album inspirations

We set a challenge to The Offering to create us a playlist of their inspirations for latest album Home, all we gave them was one question: Music is always influenced by other artists, whether consciously or subconsciously, and can sometimes be seen in the music produced. What songs or artists would you say influenced your new record and why? 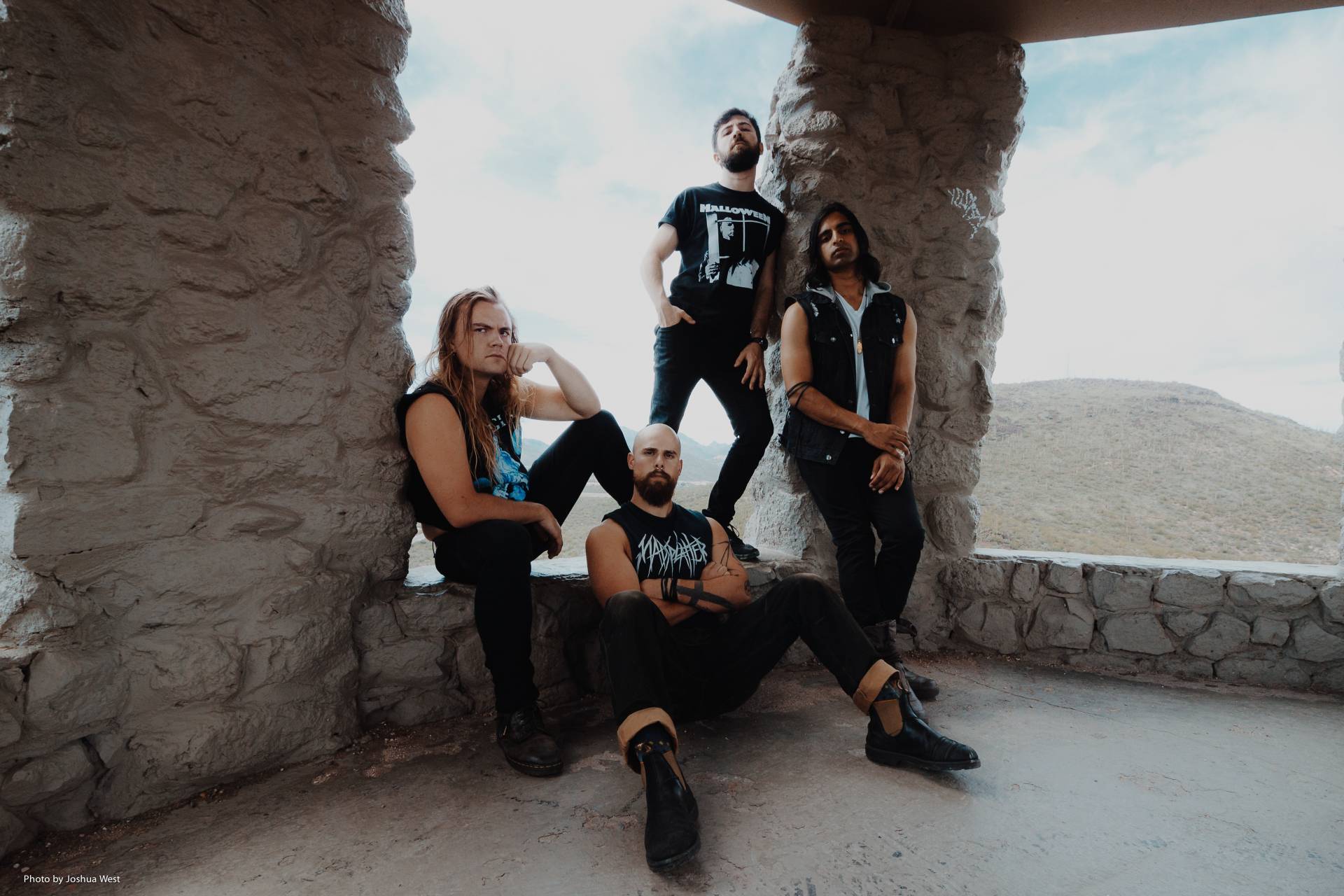 Nish:  It’s a cool concept, because I really think that nothing is truly “original.”  Our thoughts are constantly influenced by anything that crosses our paths, followed by the decision of whether we choose to accept or resist them as they pass by.  I’ve always invited influences of any kind into my life since I love creativity itself; it’s helped me be the eclectic songwriter that the press seems to appreciate.  This album was a way for me to get all those weird mish-mashed sounds out of my head.

With “HOME,” I meditated a lot on music that inspired me to play in the first place, and to not restrain myself to the “classics” in the genre.  Modern albums like Korn’s Untouchables, Linkin Park’s Meteora or Bring Me The Horizon’s There is a Hell inspired me at a younger age for how far out of left-field they were.  I wanted us to have an impact like that.  I was also inspired by other front-to-back album experiences along with my bandmates, such as Machine Head’s The Blackening, Ozzy’s Diary of a Madman, Dream Theater’s Train of Thought, Manson’s Holy Wood, Vai’s Alien Love Secrets, The Black Dahlia Murder’s Ritual, and… well… any Slayer album.  The list could go on forever.

I didn’t limit myself to metal though, and expanded into my other favorites at the time.  This included film scores, game soundtracks, rap, R&B, and even pop music.  Outsiders to the genre like No Doubt, SZA, J Cole, Blonde Redhead, Nostalghia, and Kendrick Lamar made my regular rotation and helped me stay attentive to Alex’s vocals.  Soundtracks, like the ones to Logan, Infinity War, Silent Hill, and Bleach made it in there too.

I was also inspired by a jazz rock album I stole from my dad called Venusian Summer by Lenny White.  Obviously, we don’t play that genre, but in that particular record, there’s a brilliant use of soundscape which sits underneath the players.  I used a similar technique on HOME, where, underneath everything, there’s synthesizers, pads, sometimes a full orchestra (like on the title track), that has a completely different directive than the band. The most inspired version of this is in the title track: there’s a choir with a separate set of lyrics I wrote to subliminally accent the expression of Alex (vocals).  It’s microscopic detail, but in my opinion, it really pushes it all the extra mile to be perfect.

This song is a mini-epic in itself, and is one I never get tired of.  It’s an underrated effort in a world where the public prefers his earlier work.  There’s something so theatrical about the way Ozzy and co. write their music.  He’s so one of a kind.  I absolutely love how it’s ALWAYS song-first approach with his music.  It’s only made better by Zakk Wylde’s awesome comping skills along with some great synthesizer accenting.  Underrated gem.

The Word Alive was a band that, to be honest, everyone always tried to put on my radar, but I rejected their work every single time… that is, until my best friend put Dark Matter on my table.  Turns out my guy Matt Good produced this record, and you can tell.  It’s a work of art.  I absolutely love the mastery of sonics, the attention to vocals, and the perfection of tonal balance.  There’s a million things going on, but you know exactly what you’re supposed to be listening to.  Put this on if you like our album; you’ll understand why my ears gravitate towards it.

Allan sadly passed away right as I was beginning the writing process, which prompted me to revisit one of my favorite records by him, IOU.  He’s inspired so many of my favorite guitar players, and it’s not hard to see why.  He might have the best ear for chords and harmony out of anyone in the universe, ever.  None of his progressions are predictable… it’s like he can walk you through any set of emotions seamlessly.  “Checking Out” showcases how you can make complex music sound simple if you give your vocalist a great, decorative melodic route to take.  That’s my M.O with The Offering, always.

Here’s an underrated band for sure.  It Hates You is an unbelievable album.  I love a band that can adhere to a philosophy of fiery aggression, but leave so many great melodic decorations in the burn marks.  So many fantastic, major key resolutions out of raging intensity.

Let’s talk about why the word “progressive” isn’t used properly in 2019.  The issue is, if you can categorize it as anything other than progressive, then it doesn’t make the cut.  Well… listen to The Blackening and tell me that isn’t one of the most forward thinking metal albums of that decade.  Add in the fact that they’re a Bay Area band, and you have an album that is a part of my DNA

Yeah, I get it.  Our singer has a shaved head, a goatee, and he shrieks to the high heavens.  Believe it or not, Rob isn’t his favorite vocalist (come on, that’s just one facet of Alex’s vocal style), but you probably couldn’t take me seriously if I tried to tell you that Judas Priest wasn’t on our radar.  Go ahead, give it to me.

Yeah, it’s not metal, but I’m not kidding when I say that this band is heavily influenced by R&B.  SZA sticks out to me because of the beautiful use of 9ths and off-center vocal melodies that still land perfectly inside the harmonic tensions.  A guitarist and a vocalist as two people sound massive purely out of harmonic choice.  Try to get out of your comfort zone every once in a while, and you’ll come across gems like this.

Nostalghia – “Who You Talkin’ To Man?”

Believe it or not, I didn’t watch John Wick until after I heard this song and needed to know where the hell it came from.  Tyler Bates is fantastic as a film composer, but he’s sneaked in some great work with Manson too.  His pairing with Nostalghia here is a match made in heaven, and I’m a huge fan of hers.  I always have a huge appreciation for weaving sweet production work into a good, old fashioned rock and roll beat.  I’d list the entire Manson or Nine Inch Nails discography here, but I think I’ll be problematic and force you to try something new by giving you this.

No one (alive, at least), in my opinion, comes close to the harmonic fluency of Steve Vai.  On this track, we get a rare glimpse of him writing in the baritone ranges and singing.  It’s beautiful, has big chords, and is filled with tons of neat drum-to-band interplay.  There’s something about his choice in harmony, and above that, his execution, that always expresses the message perfectly.  On top of it all, It’s usually a musical message I feel in my bones.  Who knows if I’ll ever write or produce music at this level of fluency, but it’s my motivation to keep trying.

Bring Me The Horizon – “It Never Ends”

This song, and this album, more or less changed my life and made me want to produce music.  I love everything about it.  It was a large reason why I wanted Fredrik Nordstrom to produce our record.  The fact that he loved our work and saw exactly what I was trying to do was icing on the cake.  To have his ears put to work on HOME after polishing this modern beauty gave me a moment where I had to pinch myself.  My musical journey came full circle, and now it’s just beginning thanks to this album!