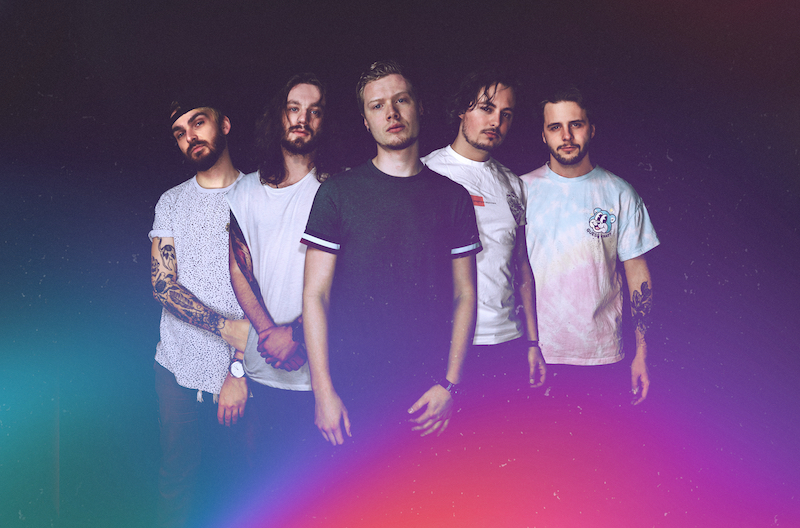 We create a modern blend of different metal styles and take inspiration from techno, drum & bass, trap and rap music. The songs we write can be distinguished by the harsh verses with screaming vocals which contrast our poppy choruses. The instruments are accompanied by huge soundscapes, heavy bass hits and different electronic noises. We try to keep it interesting and fresh with every new song.

“Parallax” could be the song we would tell people to listen to. It captures both the classic Another Now sound from our first singles, as well as the modern Another Now sound that we’ve been searching for throughout the past year in writing the album, and has a bit of everything that we like.

It has catchy riffs and heavy electronic breakdowns, Eastern / Asian instrumental elements and sing-along choruses. We might think that more dynamic tracks like “Trojan” or “Cascade” would maybe scare people off at first.

“Colors” has that poppy and bouncy vibe to it that people even outside the metal genre might like, even though it still might be a challenging listen with all the different stuff going on. It might be one of the most accessible songs we’ve ever done, but I guess we don’t really do easy listening.

On the 16th of June we will release our debut album ‘OMNI’, which features 11 tracks including featurings from Sem Pisarahu (The Royal) and Alan Grnja (Distant). Besides that we’re just really looking forward to getting back on the road and on stage again. Touring and playing these new songs for all our fans will be an amazing feeling. We can’t spill anything just yet, but keep an eye out on our socials for some cool announcements!

Crystal Lake’s “Apollo”! To say that we wish we wrote this song is maybe a bit bold as we look up to the band as a whole. Without their unique creative fluids that songs would not have existed. The reason we like this song so much is that it is all over the place with the right energy and persuasiveness delivered from Ryo and the band, while keeping it catchy. When that song first dropped, along with the music video and the incredible b-side “Machina” it just completely flipped the script for the entire international metalcore scene. It was such an incredibly futuristic sound, and they do it again with every new song that they come out with.

Northlane inspired us to bring more to the table than just bass, guitar, drums and vocals. The extra dimensions to their music in terms of electronics and all the different textures and layers are always huge eye openers to us in helping us find the possibilities in our own sound.

Bring Me The Horizon have always been very open to experimenting, trying new things and adapting to the world around them. In a weird way, seeing them take all those risks, it feels like it almost gives us permission to take risks as well, and to not be afraid to combine elements that traditionally in the metal scene you would be crucified for.

While She Sleeps are great at engaging the audience in their personal journey. Being able to deliver a message through music is one of the key components we have close to our hearts.

Our music is available on all the major platforms including Spotify, Apple Music and Deezer.

If you prefer video you can head over to Youtube for our music videos of ‘Parallax’, ‘Cascade’, ‘Trojan’ and more.

Visit the link for a summary of all our music/socials on our navigation page https://linktr.ee/anothernow

As a band we do see a lot of similarities with a chameleon, in particular the skill to adapt to different environments. As a band we put ourselves into new situations and try to blend in and learn from our fellow peers within the metal community. We shift our form several times throughout the album ‘OMNI’, even within songs like ‘Cascade’ and ‘Parallax’ where we introduce electronic breakdowns and other diverse elements. Every song is different, with its own unique surprises.