With the band fresh off the plane from their first US tour, Milk Teeth video for ‘Swear Jar (Again)’ from their critically-acclaimed debut record ‘Vile Child’. 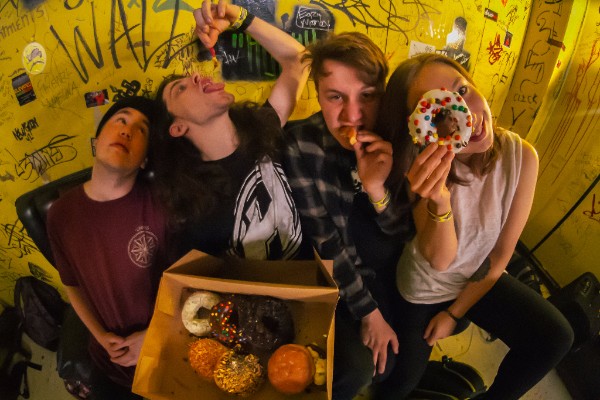 With the band fresh off the plane from their first US tour, Milk Teeth video for ‘Swear Jar (Again)‘ from their critically-acclaimed debut record ‘Vile Child’ (available now) is brooding throughout with syrupy vocal melodies and driving guitars. The track culminates with anthemic splendour solidifying its status as one of my favourite live songs.

During breaks between tours the band started putting together the skeleton of their ‘Vile Child’, arming themselves to the hilt with songs characterised by their frenetic energy, battering percussion and lyrics to escape small towns to. Of the new material, bassist and vocalist Becky Blomfield explains “with Vile Child we didn’t set out with any grand idea we just wanted to make something that crossed over – this record encompasses everything we do well as a band”.

To bring these songs to life the band spent this past summer holed themselves in the familiar surroundings of The Ranch Production House in the New Forest, the place which birthed breakthrough EP ‘Sad Sack’, to again work with producer Neil Kennedy (Creeper and More Than Life).

The result of these sessions is ‘Vile Child’ a twelve-track bombast of a record, filled to the brim with youthful abandon, impossible to fake, though never naive.