On Daniel P. Carter’s Radion 1 Rock Show last night (December 11), Creeper premiered their new single Hiding With Boys. The sextet have had a phenomenal year in 2016, embarking on their first headline tour, supporting the likes of Neck Deep and most recently Pierce the Veil, heading out to America for the first time […] 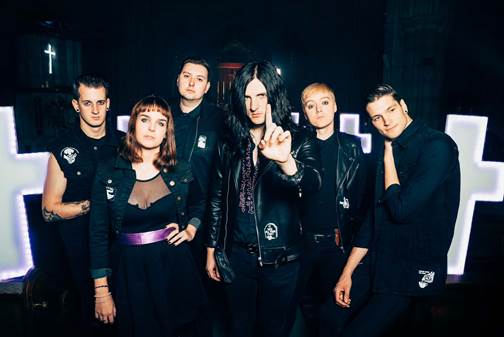 The sextet have had a phenomenal year in 2016, embarking on their first headline tour, supporting the likes of Neck Deep and most recently Pierce the Veil, heading out to America for the first time and receiving best British newcomer and best new band at the Kerrang! and Metal Hammer awards respectively!

They also sparked worldwide social media frenzy by disappearing and leaving cryptic clues sending fans on hunts and trying to piece together the mystery of the band’s and James Scythe’s disappearance. The mystery leading to the announcement of debut album Eternity in Your Arms which is set for release on Roadrunner Records on March 24.

Frontman Will Gould says of the track;

“Hiding With Boys is the very first song we wrote for Eternity, In Your Arms,” says frontman Will Gould. “It’s a bridge of sorts from the band we were on the EPs to the band that we are now, and creating it helped us to find a way to bring our incredibly varied influences together. When we wrote that chorus and the song’s huge climax, we knew we would be able to capture our ambitions for the full length. It’s a song of unrequited love told from the perspective of a ‘tragic monster’, and is a lyrical sequel of sorts to the track’ Black Mass’.”

You can check out the mysterious and compelling video for Hiding With Boys below;

The band have announced their second and biggest UK tour for March and April 2017. Check out the dates below: