Youth Funeral – See You When I See You

In short, See You When I See You is bursting with chaotic, frenetic energy, which the band use to push their own interesting, and occasionally unique, take on the genre. 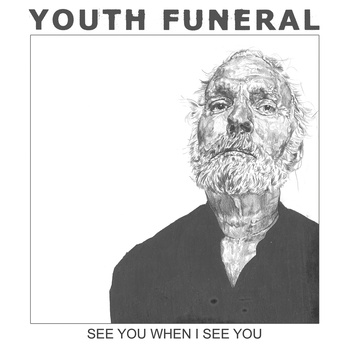 When I first played through this EP I felt the great and rare pleasure of discovering a band that is just getting it completely right. I felt the whole works – the regret of not finding them sooner, the urge to scour the internet to find everything they’ve ever released.

And I’m really not exaggerating – when it comes to honest, underground screamo, far too many bands miss the mark completely, either venturing too far into the shadows of the screechiest, most aggressive bands in the genre and becoming pretty much unlistenable to most music fans, or overproducing and sounding too polished to be credible. Youth Funeral, however, are walking the line fantastically on this record.

Every track is underproduced enough to mirror the honest authenticity of the founding fathers of screamo, whilst the tight musicianship and impressively high songwriting quality keeps it all listenable enough to interest those who aren’t necessarily accustomed to the harsher side of the genre – meaning Youth Funeral are striking an admirable balance that is by no means easy to achieve.

For the most part the EP is extremely driven and very pacy; it’s a short release, lasting around 11 minutes, and if you’re not paying attention those 11 minute can rush by before you’ve had a chance to take it in – however if you give the record the attention it deserves, it becomes clear that 11 minutes is perfectly long enough to get a clear impression of Youth Funeral’s emotive, aggressive brand of screamo.

The majority of the tracks are exciting, addictive bursts of emotionally-driven guitars sitting behind solid, harsh vocals. Each song (except I Remember – but I’ll get to that) feels complete, satisfying and necessary, reminding us of the benefits of short releases – there are no filler tracks, no needless repetitions of ideas or any other lazy tricks. Also, crucially, the songs work together as a unit – this isn’t simply a collection of good tracks, it’s a complete and effective EP.

The release does, however, have its weaker points; after a few listens, the sequence of deep, outburst-like screams heard during I Remember feel vaguely out of place – for a minute, it all sounds like any generic harcore record. Similarly the musicianship, which is intricate and impressive for the majority of the record, only drops in quality when the ring-outs of crunchy chords and other clichéd elements of hardcore creep in. These are just minor bumps however, which don’t particularly detract from the rest of the release.

In general, the EP is a noisy, frenzied adrenaline rush, however the band definitely isn’t afraid to experiment with lowering sound levels; the album calms to a quiet ambience in several places, and certain tracks (Weak But Warm) have a far more placid feel than others. The EP then, doesn’t just have the frantic energy associated with screamo, but also has a depth and warmth that so many new records in the genre lack.

In short, See You When I See You is bursting with chaotic, frenetic energy, which the band use to push their own interesting, and occasionally unique, take on the genre.