Welly, to me, seems like an unlikely venue for Young Guns to play in this day and age. But they left one word to describe this gig and that word is intimate. When a huge band, such as Young Guns, who play internationally decide that they want to play in a 200 capacity music venue in the small city of Hull, you can imagine it gets hot, it gets sweaty and the atmosphere is better than ever… 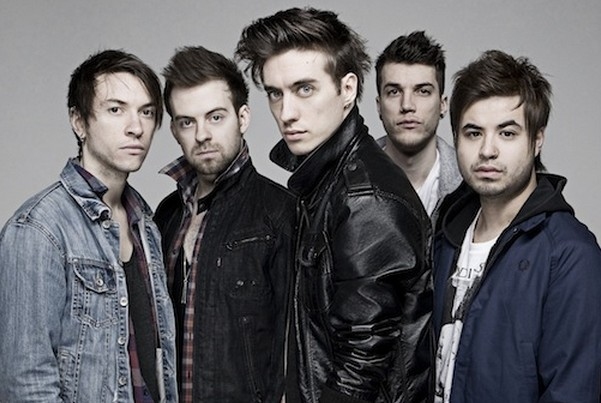 Welly, to me, seems like an unlikely venue for Young Guns to play in this day and age. But they left one word to describe this gig and that word is intimate. When a huge band, such as Young Guns, who play internationally decide that they want to play in a 200 capacity music venue in the small city of Hull, you can imagine it gets hot, it gets sweaty and the atmosphere is better than ever.

Now down to the music. The night kicked off with a total curveball that no one would have been expecting, unless they did their background research on the support bands. And this curveball comes in the name of Metal/Hardcore outfit Contours. This half an hour set served as a huge platform for the local boys to impress a packed out venue full of local music fans. Sadly though, they were missing their lead vocalist Scott Taylor (he was absent in Mexico) so we couldn’t feel the full wrath of Contours but the vocalist they chose to fill in for them still did a great job. Contours set overall was amazing. They opened well on a long instrumental intro and they finished powerfully with the addition of some pits somewhere in the middle. Although they were a total curveball and they may not have been tailored to everyone’s ears, Contours were still received with cheers, screams and strong call and response from the crowd.

Next up, with a more suited sound, were newly signed London boys Twin Wild. This was their 4th show as a signed band and they have been touring relentlessly to achieve that status, they’ve also recently been announced for Fender’s American Standard Tour, another great achievement. And on Monday night Twin Wild really showed why they deserve to be signed and playing along side upcoming bands such as Young Guns and Nothing But Thieves. They played one of the strongest sets I’ve seen in the Hull music scene, which was full of sing-along to choruses and powerful, echoing anthemic lead guitar. These are a band who are definitely on their way to something good, so if you’re a fan of bands such as Young Guns or You Me At Six then you should definitely check out Twin Wild.

Last up was the band that everyone was truly waiting for and after a 35 minute set up time the crowd was raring to go and on stepped, Young Guns. If you know Young Guns, you know these 5 lads really know how to put on a show as they interact with the crowd at every possible moment during songs and they opened in possibly the best way possible with the huge some I Want Out, in which every person in that room sung along to. Young Guns undoubtedly have a very loyal fanbase in Hull, because 90% of that crowd knew every word to every song they played. But the best bit for me was the setlist that Young Guns played. I was expecting a lot of tracks from their newly released album Ones and Zeros, but they threw another curveball as half of the one hour set was filled by multiple tracks from their debut album (and in my opinion their best album) All Our Kings Are Dead. Now this made me a very happy fan, and it seemed to have the exact same effect on the rest of the crowd as from where i was standing these were the songs which were best received and these were the songs which everybody seemed to know every word to. Sadly, Youngs Guns set did have to come to an
end, but this didn’t put a damper on the way they delivered their final track Bones. This show went out with many things and a huge bang was one of them.

If you stepped into that venue as a person who had never heard of Young Guns before, then afterwards you would definitely know what they are all about, and you would definitely be in HMV buying all of their albums the next day, and undoubtedly be at their next show. Be it in Hull or be it at other side of the country.