The Scribes – A Story All About How

Hip Hop with a twist… Read Brad’s first review of a Hip Hop record here… you’re in for a surprise! 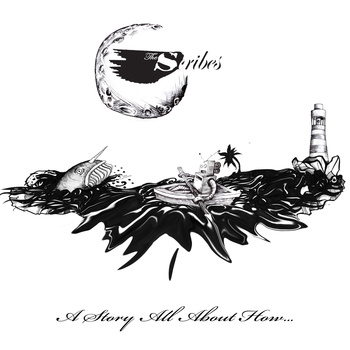 My relationship with Rap and Hip Hop music is shall we say…conflicted. Growing up my older brothers had a strong influence on the music I listen to and love today. One Brother was listening to Nirvana, System of a Down and Therapy? Whilst the other was listening to Dr. Dre, Jay-Z and Eminem so my music taste certainly varied in styles and genres. Although, I swayed towards rock I still have a strong soft spot for Rap and Hip Hop music, enjoying artists such as Kid Cudi, Run The Jewels and Jay-Z to name a few.

One problem I have with Rap and modern day Hip Hop music is it is often far too repetitive for my liking. Although, that is talking about a lot of the mainstream ‘artists’ who seem to churn out one bland release after another that contributes to a lot people being closed minded to Rap and Hip Hop.

The Scribes cannot be accused of repetition as the whole album is an eye-opener and so pleasing to listen to. I saw The Scribes live when they played in Bristol with Moriaty and honestly, when I read that they were a Hip Hop act for a blues rock band I was intrigued, dismissive and kind of shocked. The Scribes certainly surprised myself and many of the audience that night by playing a truly brilliant set which was reviewed here.

‘A Story All About How’ is a marvelous release that is filled with a wide variety of themes from party starting anthems to hard-hitting emotional songs with lyrics that really hit home. Single ‘Blood In Your Eyes’ is a completely infectious track with a catchy beat and easy to learn lyrics that will leave you rapping along like you’re the next Eminem.

‘Coming Home’ is another rough ride of a track that ventures into grime territory and I tell you what, The Scribes really bring their ‘A’ game for this track as it’s relatable and really hits home lyrically with its feeling of returning to a not so pleasant place as a consequence of your actions.

The real standout thing to take from this album is the fact that all members obviously have varied music tastes because there are glimpses of different influences and styles throughout. ‘That Sound’ and ‘Cicero’ are two of my favourite tracks on their album as I totally dig that rap meets rock edge that they portray in both these songs.

The whole album is a refreshing listen for me as I thoroughly enjoyed all 16 tracks. The Scribes have surprised me, thrilled me and most importantly reached out to me through their music in ways I did not think they’d be able to when I first received their request for a review.

If you do anything today, make sure you go and get The Scribes album here and be prepared to feel like a bad ass and enjoy the finest cut of Hip Hop I’ve heard to date.