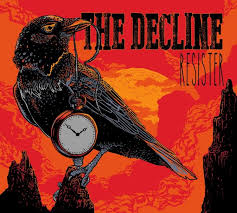 Hailing from Perth, 90s skate punk four-piece ‘The Declined’ are set to release their third full album ‘Resister’ and, pardon my Australian, it is fucking sick.
While the band have stayed somewhat close to their roots, there is equally a noticable shift in dynamic with the album, having seemingly sacrificed some heavy influence for a catchier, more harmony-driven sound, the band is certainly not lacking anything.
Something that has really stood out about this band are how well they tackle vocal and chordal arrangements. There is often a lot of melody to be lost in playing fast, punchy music, but the band’s vocalists and guitarists Pat and Ben truly nail fluid switches between harsh aggression and seemingly perfect melodies.

Upon hearing track 6 of the album, You Call This a Holiday, I was truly in shock that such an aggressive, gritty band could pull off a beautiful, calm track like that,
and was especially pleased after hearing the transition in to that oh-so-familiar snare/kick/hi-hat beat and fast guitars.

Giving Up Is a Gateway Drug is another almost flawless song, featuring a lovely harmonic, ascending vocal line and some VERY catchy vocal lines.
Their use of instrumental stops to give vocals space is excellent, and there were plenty of grin-worthy parts in this track.
There is clearly a working formula involved with The Declined’s writing, but they are also obviously not afraid to scrap this formula at every single opportunity and try new, out-of-the-ordinary things.
One thing I will mention, however, is the unfortunate frequent use of the typical ‘pop song structure’ of verse, chorus, verse, chorus, bridge, double chorus.
With such a messy, punky sound, the band could easily step out of this a lot more, and even avoid recycling parts in some songs.

All-in-all, the release boasts a true punk feel, with angry instrumentation, catchy vocals, a driving rhythm section and some absolutely wonderful arrangements.
One thing to be said is that the band are obviously not scared of leaving their comfort zone, and that they should really experiment with how much they can push their boundaries for future releases, or even to change songs up for live shows, in order to avoid their repertoire getting too similar.
Resister is an incredible release with plenty of interesting songwriting and a truly tight but intentionally messy, driven feel.

I rate the release a 4/5, and think it is absolutely great to see bands still pushing 90s punk, because there’s certainly not enough of it anymore!