It was time to lay siege to hell in the streets of Cardiff as Manchester’s horror metal sons The Dead XIII arrived at Fuel Rock Club in Cardiff. Stepping out of their van to meet the fans waiting, armed with NERF guns, you just knew this was going to be a memorable first Welsh show for the quintet. 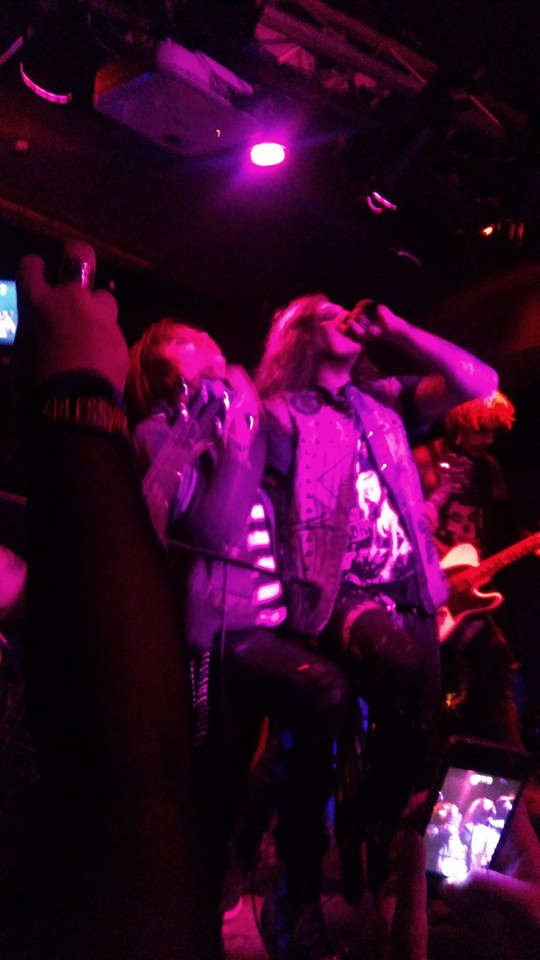 It was time to lay siege to hell in the streets of Cardiff as Manchester’s horror metal sons The Dead XIII arrived at Fuel Rock Club in Cardiff. Stepping out of their van to meet the fans waiting, armed with NERF guns, you just knew this was going to be a memorable first Welsh show for the quintet.

First up was South Wales Valleys post-hardcore quintet Remember the Fallen. Props to new rhythm guitarist Jack for a great first show. The band opened up with new track The Last Man Standing and were joined by Dethias’ vocalist Dan Griffiths during Traitor. The band put in a tight show, in which aside from the nerves evident on his face, you would have thought he’d been in the band since the beginning! The customary ending with a cover of Pantera‘s Walk ensued and the crowd loved it.

Up next was Dethias, the Pontypridd based sextet became a crowd favourite as they belted out track after track, including the incredible Battleborn. With some awesome guitar work that seemed to be an old-school throwback to metal giants like Rammstein at times and a charismatic frontman in Dan ensuring a great set.

London based rising New Grave stars Solace in Nightmares were up next delighting the crowd as they played through their recently released Secrets EP. Starting with fan favourite and lead single The SiNphony, the crowd sang along word for word, with some only coming unstuck on the rap during The Hunt Is On. Closing track Le Danse Macabre had everyone dancing (including some attempts at Cossack dancing from a few members of the crowd – which was hindered by the space). For a band that has been going for around a year, their tight-knit live show is a spectacle worth seeing with frontman Luke Lucas’ crowd-engagement second-to-none.

Finally, The Dead XIII graced the stage, ready to belt out hits from their critically acclaimed debut album Catacombs as well as some old favourites from EP Creatures of the Night. Aside from temporarily breaking microphones, a flawless set by the quintet, with whiskey-soaked riffs galore and tongue-in-cheek horror lyrics as they belted out hits including Stake My Date. Solace in Nightmares’ Luke joined the band on stage for crowd favourite XIII and the rest of the band joined them for closer The Greatest Mistake. The joint vocals of TDXIII’s Kurt Blackshard and SiN’s Luke complimented each other effortlessly.

The gig was over, but the night was still young. Guitars and equipment were packed away in record time and out came the NERF guns. Prior to the gig, the challenge of a NERF war was set by The Dead XIII and accepted by Solace in Nightmares. Positions were taken and firing started. What you can say was an unfair battle (with Team SiN having six players and Team XIII having approximately thirteen {but hey, you can’t be called Team XIII with less than thirteen players}) was undoubtedly won by Team XIII. An unusual yet delightful way to end a great night.