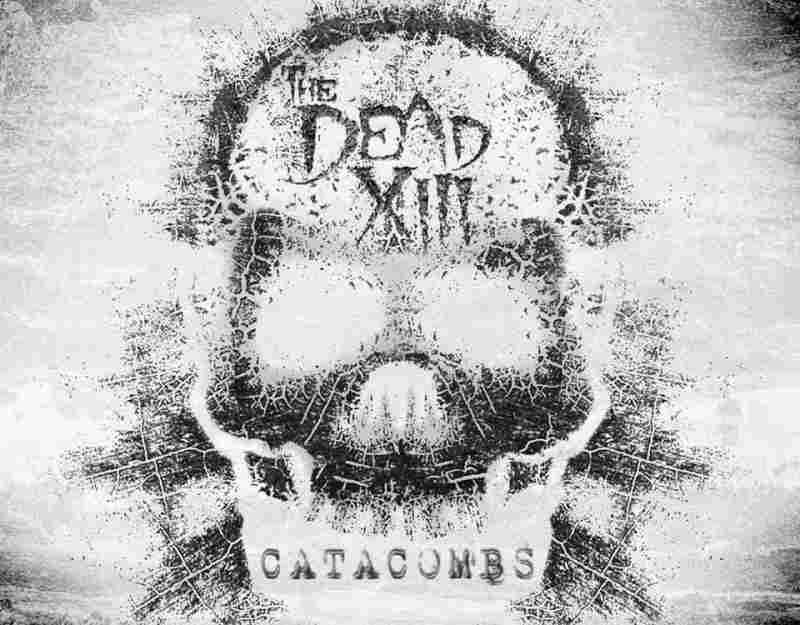 Manchester horror-metallers The Dead Xiii released their eagerly anticipated debut album Catacombs following 2014’s Creatures of the Night EP and off the back of a successful run on the British Horror Story tour with Ashestoangels and Farewell My Love.

The band’s influence by fellow horror-bands Wednesday 13 and Murderdolls, is evident in the album, however they have brought something of their own to the genre by combining distinctive synths with incredible riffs and the horror style lyrics – albeit tongue in cheek, relayed by powerful vocals.

Opening track Xiii is a catchy, repetitive track which as was discovered on the BHS run, is a crowd pleaser with the lyrics easily picked up on the first listen. The opening track is my personal favourite from the album

Frostbite is the first release from the album, unsurprisingly, as it is one of the most impressive tracks on there. With the intriguing synths and riffs and the unique vocals (in the British scene).

Daemons to me brings the horror to the album, with some of my favourite lyrics of the year. Title track Catacombs begins much like the previous tracks, before the middle eight stops to provide an eerie, calming melody, giving an almost haunting end.

Be-Were begins in an almost Pantera-like fashion with the combined drums and riffs. The middle-eight riff is enough to get the air-guitars out and stop the head banging that would have previously taken place. The eerie church bells provide a very different opening to The Greatest Mistake with the spoken lyrics giving the impression of a Halloween ghost tour introduction.

Haunter sounds like a classic metal track while the lyrics still keeping the horror aspect. Lay Siege to Hell really does lay siege to hell and would be a track that I would love to see live as I turn my living room into a mini one-person mosh pit. Can’t Escape the Grave reminds me of the Murderdolls and the influence of the band is heavy in this track.

Closing track Apothesis is very different to the rest of the album, however it shows that they aren’t afraid to change things up and with a track bordering on dark metal, it’s slow and a great ending to the album. While I feel this may be the track that has mixed reactions from fans and critics alike, I feel that it is a good track that will either immediately be a favourite or will surely grow on you as you continue listening to it.

All-in-all a very good effort from the Manchester quintet who are set to bring the horror-metal genre alive in the UK. After a very successful run around the UK and this top effort, I’m excited to see what’s next for the quintet. More tours? Another EP/album? Count me in!