Almost a year after their formation, Solace in Nightmares released their debut EP Secrets on Halloween. Elizabeth Birt gives her thoughts on the release… 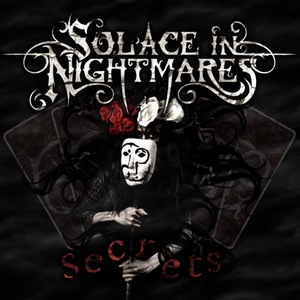 Almost a year after their formation, Solace in Nightmares released their debut EP Secrets on Halloween.

Opening track The SiNphony begins with a piano intro and a monologue from vocalist Luke Lucas introducing the track and EP before the riffs and beat kick in. The vocal range of Luke and backings by guitarist/vocalist Matt Seaborne are shown well in this track.The instrumentals are extremely catchy and the mid-song duet between Luke and guest vocalist Lisa Avon (Orestea) make the track something special. The video for this is a perfectly directed and orchestrated piece which fits the theme of the track.

Behind The Mask gives the impression of a dark track from the start. The drums are prominent in this track showing off Shawn King’s talent. You would be forgiven for thinking The Hunt Is On was part of Behind The Mask from the opening chords, however as it carries on, it becomes one of my favourite tracks complete with a rap.

Succubus was the first taste of the EP and on first listen, didn’t really impress me, however the more I listened to it, the more it grew on me and after listening through the EP from start to finish, it is one of the strongest tracks on the release and fits in perfectly with the theme that seems to run through the EP. With its catchy refrains, its a track that bodes well for live performances and continues the theme of big riffs.

Closer La Danse Macabre’s dark lyrics are contrasted by the upbeat riffs and prominent drum beat. A great way to close the EP and a track that had me dancing around my room while trying to write this.

All in all, a great effort for a debut release from a band who are still relatively new. The tracks will transfer over to bring a great live show and seem to tell a story as you listen through. All of the band are talented musicians and the dual vocals and instrumentals come together well.