Shark Tape are a three-piece Rock band from Philadelphia. They have been active since 2007 under other names, but have been Shark Tape since 2012, where they released two EPs. Marathon is their debut album and AltCorner Writer Alice Liguori had a listen and gave her thoughts on the release… 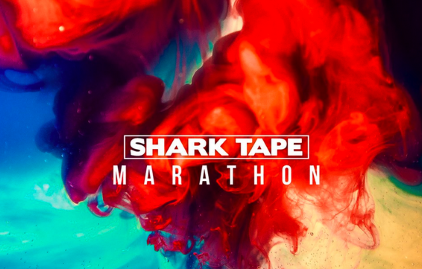 Shark Tape are a three-piece Rock band from Philadelphia. They have been active since 2007 under other names, but have been Shark Tape since 2012, where they released two EPs. Marathon is their debut album where they worked with Jeff Ziegler, who has worked alongside the likes of Kurt Vile.

Marathon’s opening track Bronco makes me feel reminiscent of a memory I can’t quite recall. It reminds me of a summer spent with some close friends, or a brilliant night out with some friends in an indie club. It’s a song that makes you want to get up and dance with your friends but at the same time you could also be singing along to it at a picnic or on a roadtrip.

One of my favourites on the record is River Runs Deep, a track that really grabs your attention. It feels so full of life and has so many different layers and things going on at once that it really fills you up, in the sense that it satisfies everything you expect to want from this band.

Smell of Sirens has a slower, more emotional feel behind it. Almost giving a nice little interlude amongst the other, more upbeat songs on the album. Leading onto Neverlast, with lyrics like “I guess I’ll be looking back/Feeling regret over my wasted time” you definitely get the sense that this quirky indie album has some deeper, more sad undertones that are scattered amongst some summer vibes.

Top Rock Seller has more of a ballad-type feel, which fits in well with the album, but has a slightly more gruff and heavy tone, like and old-school rock ballad. With the lyric “I sold my soul to rock and roll” and a guitar solo, it definitely feels like something from a past era. In contrast to this, Silly Things is perhaps the saddest song on the album: “why do we do silly things/what the fuck is love/who the fuck are you”. The guitars have a melancholic tone that brings a lot of sad emotion and make this song feel like one you would listen to with a broken heart.

Shark Tape’s debut album is certainly a beautifully constructed piece of work, every song feels like it has had a lot of hard work and love put behind it. The indie vibes that are given off make this a perfect summer record. This album has a very dynamic feel to it, starting with summery songs, and drifting in and out of sad songs it is definitely one that many could relate to. I feel like this album is one to listen to on road trips with friends in the summer.