Rebellion Festival 2015, the biggest punk festival in the UK all year! You’re probably thinking “Oh punk is dead, it’s dead boring and repetitive” But you couldn’t be more wrong, with different band genres from all over the country including; Ska, Reggae, Hardcore and Punk! The festival is held at the Winter Gardens in Blackpool, […] 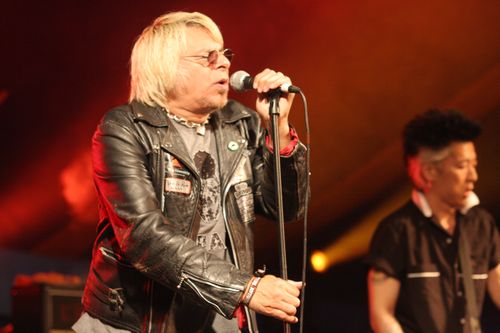 Rebellion Festival 2015, the biggest punk festival in the UK all year! You’re probably thinking “Oh punk is dead, it’s dead boring and repetitive” But you couldn’t be more wrong, with different band genres from all over the country including; Ska, Reggae, Hardcore and Punk!

The festival is held at the Winter Gardens in Blackpool, a huge venue for the festival to be taken place. This has been the home to the Rebellion for over 10 years. I was lucky enough to get weekend tickets to see all the bands on show, ranging from old punks, like Peter and The Test Tube Babies, UK Subs and the Misfits. To new bands like, Imperial Leisure and the absurd Ted DiBiase and The Million Dollar Punk Band.

The winter garden holds 5 stages inside, the huge Empress Ballroom, the soon to be demolished Arena stage, The outdoor (lets go have a quick fag whilst watching bands) Casbah Stage, the main Pavilion Stage and the surprisingly popular Almost Acoustic stage. All of the stages have bands playing constantly, so there was no excuse for being bored!

I arrived at the winter gardens at about 7 o’clock Friday night, This is where all the well known bands would be arriving on stage, like Subhumans, Last seen Laughing and October File, I personally like Subhumans, so I arrived at the huge Empress Ballroom and saw them, they were electric, with frontman Dick Lucas having delivering an amazing performance, he also happened to have 2 other bands to play in this weekend, Citizen Fish and Culture Shock, good luck.
Proceeding around the venue, popping in and out of bands sets and seeing The Damned and Booze and Glory, The Damned, surprisingly not for me, I lasted a whole 10 minutes and they’d only played one song, more of an entertainment show rather than a music show. That was Friday night for me, didn’t see many bands but I was tired and went back to the hotel to rest up for tomorrow.

Saturday! Again, didn’t see many bands in the morning – early afternoon due to me seeing another gig that afternoon, Pressure 28 and Indecent Exposure. I saw my first band at around 10pm seeing Barstool preachers, a very lively bunch of lads. But there weren’t many bands I wanted to personally see that day, So I headed back to the pub with my dad!

Sunday. The day I was looking forward to the most, the most bands I knew and who I wanted to see, This was more of A Ska day. Getting up early and popping to the closest Wetherspoons to grab myself a sausage buttie. Then off to the venue, first band, Random Hand, this band is one of the most lively bunch of lads I’ve seen preform, these bunch of punks are so full of energy on stage and they make very good music, leaving me tempted to buy their album.

The Second band I saw were Sick on the Bus, a very good straight up punk band, me and my mate Leezy enjoyed them very much. We then proceeded around the venue to find The pUKES, a very fun and new punk band with mostly females playing well known songs on their Ukuleles! I seriously suggest you check them out, they’re very entertaining.

Then after something to eat, I went and saw one of my favorite bands Imperial Leisure, now they are just mad! A mix of Ska and Hip Hop, they create the new genre Alt-Ska, I really really like them!
As well as having punk bands with a meaning, there is also a comedy music spectacular, Kunt and the Gang. The frontman, Kunt, sings about all sorts, but you’re best off checking him out yourself, I don’t think this website supports that kind of comedy stylings. Getting close to the end of the night and the end of the festival, the last band I see is Less than Jake, the funny Americans travelled here to preform their quality music, and quality it was! A jam packed performance with the band getting the Security involved in their set making them have a dance off for prizes, confetti and all sorts fired through the air to make for a quality ending for the festival.

Overall, I think Rebellion Festival 2015 had been a huge success and next year will be even better!