Patent Pending are an American band from New York. Having been around since 2001, the quintet has gathered a loyal and accepting fan base along the way. Their latest release is entitled ‘Riot Hearts Rebellion’ and follows up the ‘Armageddon’ EP that was released just four months prior… 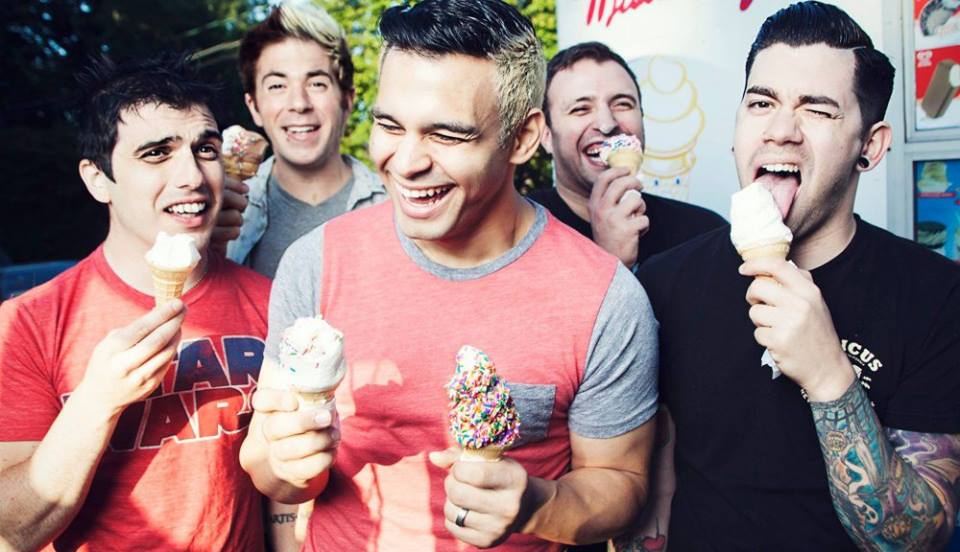 Patent Pending are an American band from New York. Having been around since 2001, the quintet has gathered a loyal and accepting fan base along the way. Their latest release is entitled ‘Riot Hearts Rebellion’ and follows up the ‘Armageddon’ EP that was released just four months prior.

Patent Pending have had a chequered career in terms of their quality of releases as they first found widespread attention following an affiliation with Bowling For Soup, a band who they share some similarities with, certainly. In recent years, the New York five-piece seemed to have tried to stray away from these comparisons and certainly incorporated some interesting styles, ideas and questionable developments into their studio releases.

Riot Hearts Rebellion is one of the most inconsistent releases I have listened to this year. This review is going to be dogged with plenty of negativity as quite frankly, it just isn’t very good. However, there is some form of solace that the band can take from this later on. The opening segment ‘Another Day’ offers a little glimpse of some lyrical work that is worth noting about and even contains a nice overlaid riff that blends elegantly with the atmospheric introduction. It’s when the album begins that the cracks in Patent Pending’s armour begin to show. ‘Until The Sun Comes Up’ sounds reminiscent of a track that was present on TV Channels like Nickelodeon and Disney Channel back in 2005 although, unfortunately it’s more Jonas Brothers than it is Drake and Josh. This track features some horribly misplaced synthesizer parts and regrettably cringe-inducing lyrics that just fail to leave any form of lasting effect.

‘Love is Anarchy’ momentarily pulls me, as a listener, back from the shadows with a catchy and certified pop punk over-riding beat and features lyrics that even if lacking in quality, certainly are catchy. But, the problem with this album is, it is just completely and utterly all over the place…

The tracks on this album are all sub-par at best and fall way short far too often. The album as a whole is predictable and almost insulting to newcomers like myself, as it just sounds like this band have really not made any form of effort on this record. The lyrics are something that for me, is the biggest let down on this album. Now, I have listened to plenty of ‘comedy’ artists who specialise in writing quirky and cheeky lyrics but Patent Pending just simply aren’t funny… ‘NSFW’ and ‘Dating A Dick’ are my picks for examples as they really do demonstrate just how far this band fall short. Both songs have toilet-humour that is so bad, I actually had to take a five minute break to get over just how poor they were. That is merely two tracks on the album I am dissecting there and that’s without going into the other notable cringe-inducing lyrical content this album features. I also hate to be the grandad of the party but the lyrics present on this album are not only mind-numbingly poor, they are also extremely out of touch with the younger fans of Patent Pending which I think is almost a misuse of their power in many ways. Yes, they are a bit of a comedic act but it doesn’t mean they have to resort to such garbage and don’t get me wrong, I am not saying other artists right now aren’t writing songs with content just as bad but when there is a whole song dedicated to sending nude pictures you can see where I am coming from.

For Patent Pending, it’s sad that they’ve chosen to go to this route because 2011’s Second Family showcased a good quality in terms of song-writing and the creation of their song structures. To be honest, from a musical point of view, ‘Second Family’ is a completely superior album and you can tell the effort they put into this album because it has well-written hooks, because it has thoughtful lyrics and most importantly it actually has a soul to it. Riot Hearts Rebellion on the other hand, is an album that does none of the things the quartet excelled at on ‘Second Family’. Instead, they’ve created an album that is a complete parody of their former selves. The fact it took a matter of months to release this album so soon after their previous EP relates well and goes a long way to explaining why this album feels so rushed and poor. Although, I really wouldn’t be surprised if this was created in a matter of days, it feels that incomplete.

This album is no doubt going to be a hit and firm favourite amongst most of the ever-adoring fan base Patent Pending have but I can’t help but feel sorry for them as quite frankly, they have been stitched up with this release. Sometimes bands can release something so poor yet you can overlook it because your sheer adoration for that band outweighs the poor content but this album really does stink and I wonder just how much more their fans’ loyalty can be tested before it is too late.

This album is one that, I frankly don’t want to hear again and after trying to work out how a band can go from releasing a great track such as ‘One Less Heart To Break’ from an album like ‘Second Family’ to creating the woeful ‘Dating a Dick’ and the subsequently poor ‘Riot Hearts Rebellion’ album is something that I still remain clueless upon as I struggle to work out the bands motives for this release.