Despite having a somewhat polarizing line-up, the Deez Nuts ‘Word Is Bond’ tour was one of the biggest Alternative/Hardcore tour packages of 2015. On November 26th, the rambunctious line-up took over London’s Underworld, an iconic hub for both modern and classic punk music in our capital. 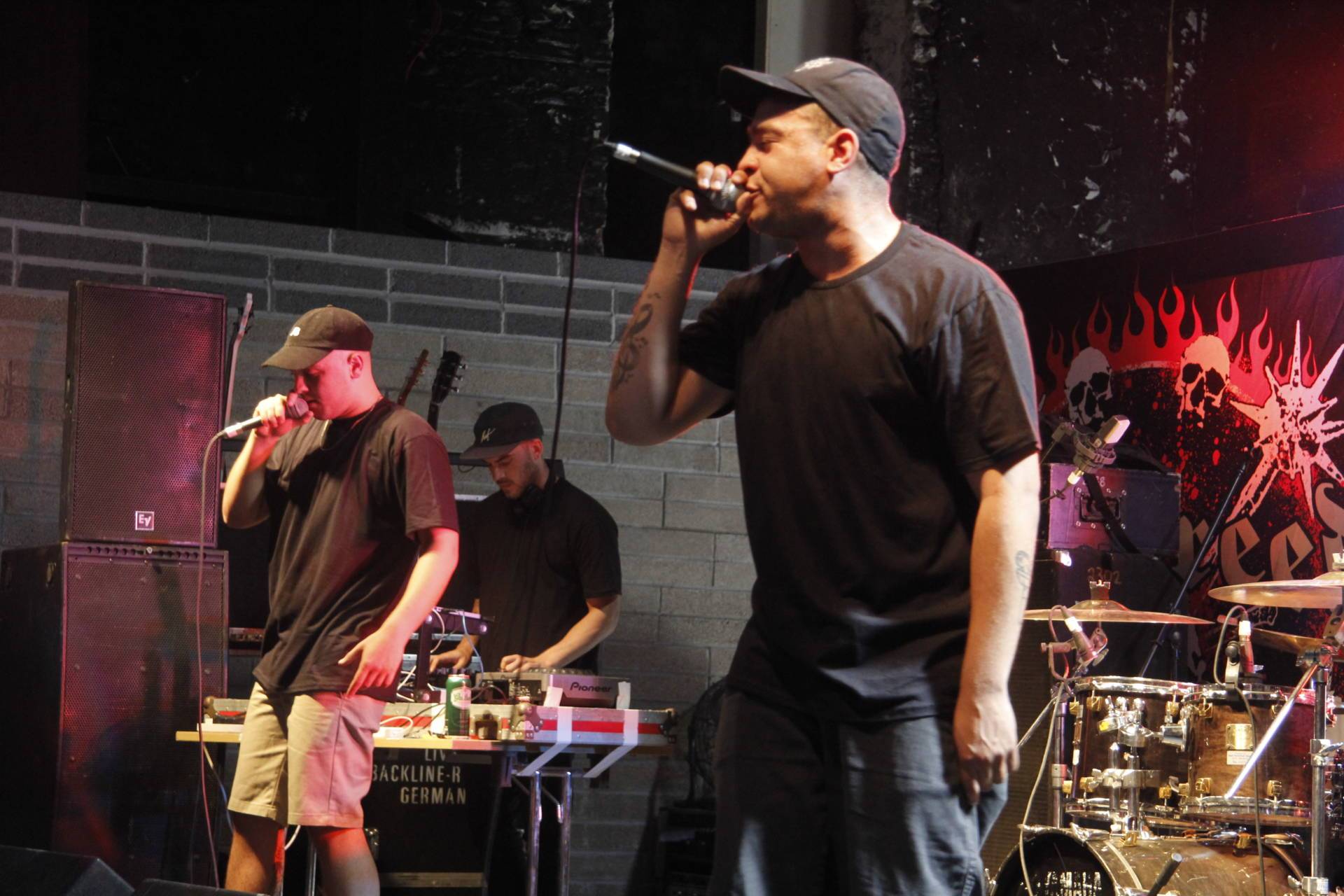 Despite having a somewhat polarizing line-up, the Deez Nuts ‘Word Is Bond’ tour was one of the biggest Alternative/Hardcore tour packages of 2015. On November 26th, the rambunctious line-up took over London’s Underworld, an iconic hub for both modern and classic punk music in our capital.

The first portion of the evening however, was a bit more dialled back and mellowed out. The first performance of the evening came in the short, bald, tattooed package that is Louie Knuxx – A rapper from New Zealand. Joined onstage by Deez’ front man JJ Peters, (who did nothing but bop his head despite holding a microphone the entire set…) his set was nothing spectacular.

Credit where due, he gave it his all, he’s not necessarily untalented – maybe he’s just not feeling it tonight. But, the feeble bars were dribbled instead of spitting pure fire, and laid over a formulaic, tinny trap beat on his macbook. This paired with awkward attempts of self effacement as well as lyrics being received as somewhat sexist by a few of the members of the already dwindling crowd just killed off all possibility of salvation and buried it at sea.

Thankfully, up next was Astroid Boys, the perfect stepping stone between genres. As well as having shared the stage with the likes of BBK, The Cardiff rap squadron are well known in the UKHC scene for their hectic live shows and their fairly unique genre blends.

Having played a setlist of primarily new material (with just one or two tracks from debut EP Bacon Dream peppered throughout – a refreshing departure from the set list they’ve toured with for the last year or two) their set was very well received. The sing alongs and stage dives were a very different sight to what was occurring during Knuxx’ performance. Closing on fan favourite minging, one of two vocalists, Phillip/Traxx, took to the pit and disappeared in seconds. Always great audience interaction and showmanship, I look forward to seeing the Astroid boys once again.

Up next was the turning point as the stage floor area filled up with people eager to see Florida’s Expire, a hardcore band who aren’t unfamiliar with London but haven’t played here in just under two years. With that said, no one has forgotten about them and from the first note played the energy in the tiny room exploded, and for the next forty-five minutes the underworld was a playground. Playing a set with songs from newest record Pretty Low, as well as earlier material (including crowd favourite ‘Just Fine’ towards the end) their performance was flawless – energetic and emotive with moshy grooves paired with nihilistic and aggressive lyrics.

The classic energy you witness at modern punk shows – Sing alongs, stage dives and two stepping as well as facial kicks – are ever prevalent and provide a majority of the crowd with what could only be described as a drunken aerobic workout.

After expire finished, a good 80 percent of people standing in front of the stage took to the balcony and the upper back part of the room. This is due to the fact a small war was about to kick off in front of the stage. The catalyst in this equation? Nasty, one of the finest (and one of the original) bands in the more modern wave of beatdown hardcore from Europe. Promoting the record they released this year, ‘Shokka’, Nasty play a setlist which is surprisingly mixed, with material from as far back as their 2010 release ‘Give a Shit’ right up to the most recent release.

Vocalist Matthi is great to watch because as well as being a powerful vocalist, his onstage mannerisms put him across as a 12 year old giant (in the best way possible of course.) Hearing the songs ‘Slaves to the rich’ and ‘My brain went terribly wrong’ played flawlessly, whilst watching the 20 odd kids who stayed in front of the stage to batter each other, made for a very entertaining period of time.

Due to travel I left after Nasty had finished – so in summary, the artists I did see were all fantastic performers, every person in the room had a really fun night and I eagerly await the next opportunity to see all the artists from tonight.