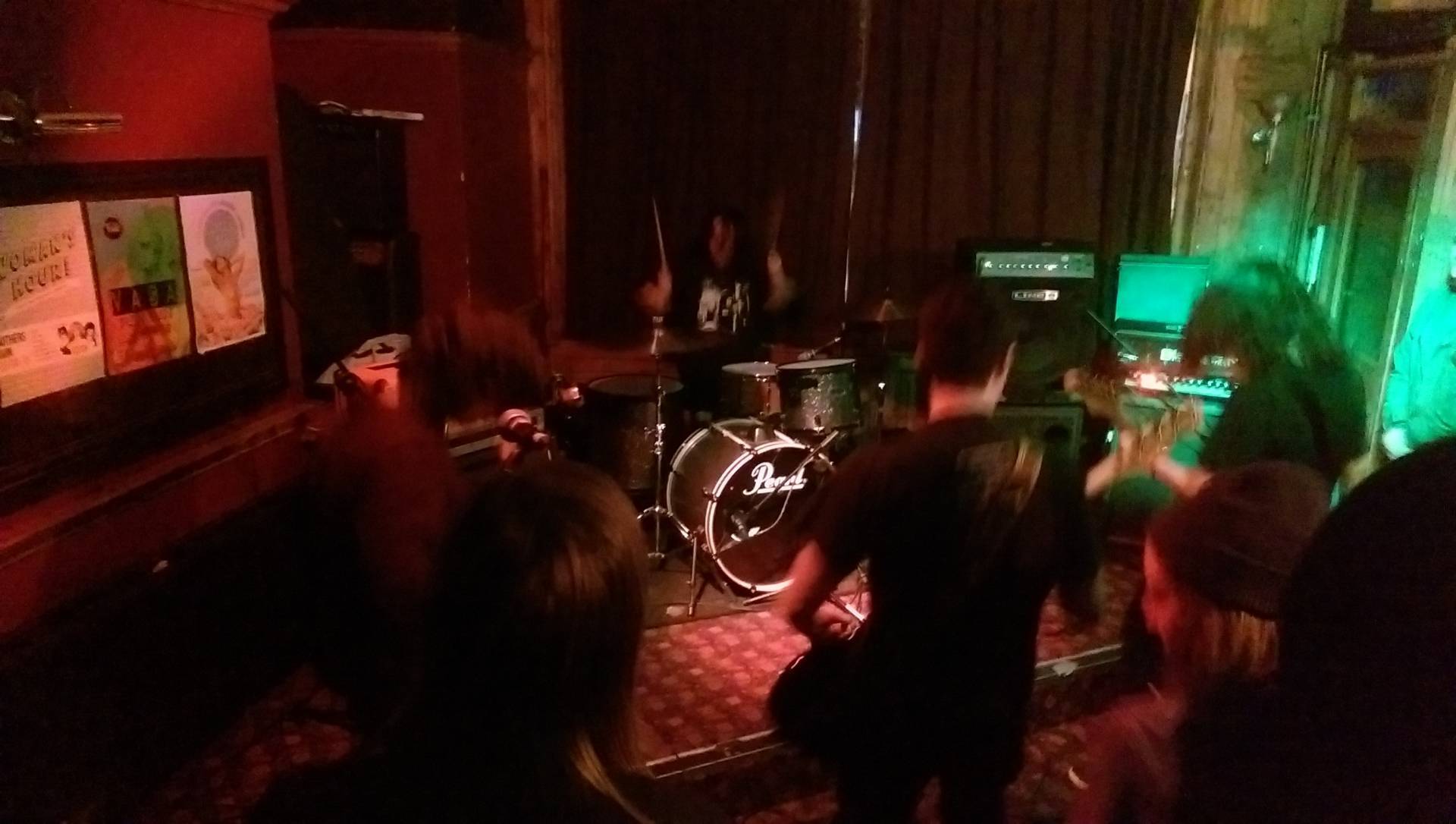 On a Sunday where most people would normally be chilling out after eating a massive roast dinner, Bristol people braved the cold to venture to the Stag and Hounds to witness one of the most promising UK bands of 2015 Hindsights perform alongside five other great bands in the form of Richa, Pushing Daisies, Weatherstate, Fairview and H_NGM_N.

Beginning the night were Bristol based four-piece Pushing Daisies who delivered the first slice of emo brilliance of the night. Having recently had some line-up changes adding drummer, Tom Ruff and guitarist, Olivia Hopkins to proceedings their sound has been transformed, revitalised and vastly improved. Playing tracks from their debut EP ‘Middle Child’ with ‘Throw Me Away’ being a devastatingly punk-ridden introduction to their set and ‘Self Beliefs, I Have None’ being as potent as ever, their set was one of the finest I’ve seen Pushing Daisies perform and they are a band that are really on the cusp of brilliance. A performance of an as yet unreleased track that reminisced Superheaven really was the best song of their set and if that was a taste of what is to come, Pushing Daisies could just be the next emo sensation.

Next band of the night was H_NGM_N who are a new on the scene two-piece from Brighton who draw influences from bands such as Gnarwolves, Balance and Compure and The Excerts. Their blend of emo tinged rock was well received and their performances of currently unreleased material were in many ways emo’s answer to Royal Blood. It was a solid performance by the two-piece and despite the lead singer and guitarist forgetting a song, which he did eventually remember, they really did earn themselves new fans and rightly so.

Fairview were the next band up and the self-professed ‘emo baes’ who set out to ‘slay the night’ as they did just that as they dazzled through their impressive catalogue of tracks that showed glimpses of strong grunge influence. The audience soaked up their emo anthems and their set was a thoroughly enjoyable one for those in attendance. In many ways they reminded me a lot of early Seahaven both with their content of material and in their performance.

Fresh off the back of supporting The Swellers, Grunge Punkers Weatherstate delivered a stellar performance which included tracks taken from their new EP ‘Dead Ends’. A thoroughly enjoyable set from the Bristol based band with their experience and cohesion gained from their tour with The Swellers and obvious hard practicing made for a concise, passionate and coherent performance.

Richa from Hereford delivered a mind-blowing performance of some of their most well-known tracks that were both atmospheric yet harsh which sounds like a very odd mix and in truth it is. However, it’s a sound that you need to see live to really embrace the sheer quality of their delivery. Lead singer Gethyn Thomas was enigmatic and reminiscent of Jason Butler from Letlive as his emotion over spilled in a mind-blowing way that was evident that Richa are very passionate about their music if their lead singer is anything to go by. Trust me when I say this, these are entertaining, brilliant and a real breath of fresh air amongst the UK music scene.

The headliners Hindsights took to the stage to perform some of their finest tracks from new album ‘Cold Walls/Cloudy Eyes’ but it was their performance of ‘Grey’ from EP ‘The Thoughts That Weigh Me Down’ which really stole the show with nearly everyone in the first two rows shouting the lyrics back to the band. Throughout the whole set, I really got the feeling that I was part of a privileged group of people lucky enough to see this band before they really blow up in stature. ‘Cold Walls’ was another highlight as it’s my personal favourite from their new record and closer, ‘Daydreams’ was a fitting end to what was a ridiculously good performance from the soon to be emo heavyweights.