Ashleigh Carr recently attended Ghostfest 2015 in Bristol. In what could be the last ever installment of this renowned festival, Ash made sure he saw it off in style seeing a whole host of bands. You can read his review of the event here. 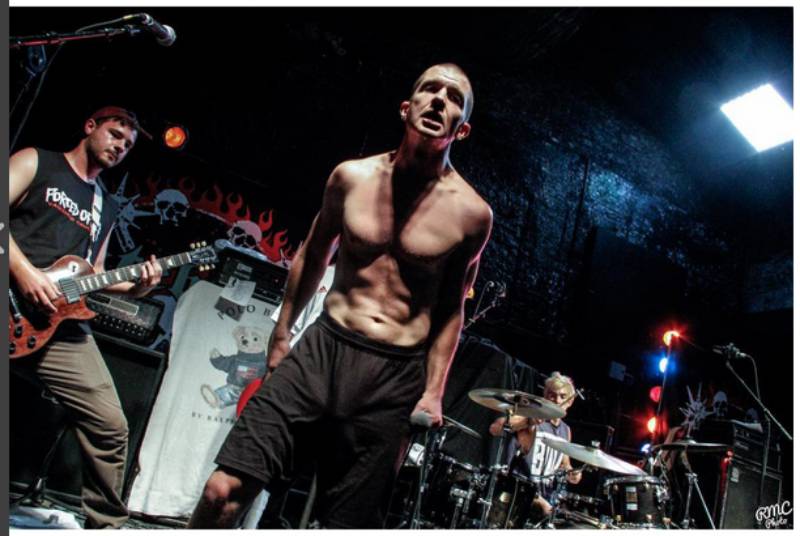 Sunday 6th September. Bristol. Absolutely gorgeous weather. This is the kind of weather you would want for an all day festival, if it was outside! However this particular festival would be held in a warehouse that is multi used as a skate park by day and a music venue by night. Hosting such nights as Architects headlining tour, Enter Shikari festival warm up and the massive punk band Less Than Jake. Although it doesn’t sound appealing, this is a very good venue for music. Perfect, big open space for the music to travel all the way from the front of the stage to the back at the bar. This isn’t my first time here for a gig, and it for sure won’t be my last. It’s quickly turning into one of my favourite places to visit for shows in Bristol.

The time is 12:15, this is the time when Ghostfest’s first bands are supposed to take stage, however due to a freakish situation on the M1 (live deer running around the place, don’t they know people are waiting for these bands!) this has delayed the show by an hour. Everybody is waiting patiently in the queue, working on our suntans before we go in and sweat our little tits off to the variety of bands that will take the stages today. Ranging from bands who’ve been around forever and toured the world; Hatebreed, Despised Icon, Emmure, Nasty, Desolated and Turnstile. To the younger bands who have the world at their feet; Blood Youth, Seafoal and Slaughter to Prevail.

The first band I went to see were the hardcore band from Sheffield, Malevolence. Now i don’t listen to this band much, the only song i know is Serpents Chokehold but they opened up in with full intentions. Heavy riffs and brutal breakdowns with the moshers starting straight from the beginning, looks like everyone has had their weetabix this morning. Roundhouse kicks were kicked, elbows were swung and just all round violence with the apology if a bystander was caught. Oh, how i love the pit.

Than it came, Serpents Chokehold, boy did the pit open up for this one. Well played lads.

As they played out the final breakdown, I slowly made my way to warehouse for the first of many bands i was excited to see play there, Blood Youth. As i mentioned earlier, this band hasn’t been around much, only 1 EP released (Inside my head)  but that was enough for me. I had been listening to this EP now for 6 days straight a mix of heavy lyrics and catchy choruses, this band are going to be huge. I eagerly waited in the middle of the room for what was about to unfold.

They start the show with a personal favourite, Dead Space. As soon as the lyrics ‘I’ll burn this house, just to kill this disease’ get screamed down the microphone I went in. Hard. That was the tempo set for the next half hour. Blood Youth killed it, and i’m going to make sure i follow them as much as i can throughout their career.

Next up, Seafoal. Now this was a very nice surprise, just a girl who goes by the name of Siana singing her beautiful voice out to her own written songs and 2 covers. She covered both Fall out boy and Linkin Park in between her songs from the debut EP. Considering the nature of this festival, it was nice to see a completely different kind of artist. It was a pleasure to watch her.

Next 3 bands i saw; Continents, Slaughter to Prevail and Martyr Defiled, we were back to business. 3 really good heavy bands who deserve more recognition than they get. Each band delivered their version of hardcore with passion and meaning. Definitely showing what they’re all about. The defining moment of those 3 sets was Matthew Jones (Martyr Defiled) spending most of his time within the crowd. Hopping the barriers to get involved with the guys who were helping him scream the lyrics to ‘Lvcifer’ down the mic. I’m pretty certain he went outside the venue! Very solid performances from the 3 bands. I had the pleasure of talking to some of the band members from Continents and Blood Youth, all just happy to be here and seeing the support from us guys blows them away. This is just one of the reasons bands do this.

Next up was the big boys, Despised Icon. Now again, admittedly i haven’t given this band the time of day but that did not take anything away from their performance. Playing together as though they’ve been doing this week in, week out for the past year. Not looking like they’ve been a band on hiatus. Playing all the best and heaviest songs from their catalogue. Every song they played, it seemed as though 5 more people would join in the pit. Boy, Ghostfest came to party. ‘M.V.P’ was the final song of the setlist, i’m not even kidding when i say this. I saw a guy take a flying kick right to the chest, the pit blew up. So good to witness, and so good to see Despised Icon here in Bristol!

Emmure. Now, they missed out on Ghostfest North as they couldn’t make it in time so they had a lot to make up for. During the build up, i met 2 lads from Birmingham who had already been to the Leeds part of Ghostfest but missed out on Emmure. So they made the trip down to Bristol just to see Emmure, now if that isn’t commitment i don’t know what is.

Emmure definitely had a gameplan in mind because they were smashing through the songs.. Nothing ever felt rushed though just all business.. Emmure kicked off with possibly their most controversial song. So controversial in fact, Apple music has made sure the song remains “(Untitled)”. This, was a very good place to start as the crowd were so involved and the pit just seemingly getting bigger and more brutal than the last. They played many fan favourites such as ‘Solar Flare Homicide’ and ‘Children of Cybertron’. From start to finish, they were amazing. Well worth the wait.

My final and favourite band of the night. Stray from the Path. The main band that attracted me to Ghostfest.

The band come straight out, and into “Outbreak”. The first single released from the new album “Subliminal Criminals”. The audience immediately breaks into frenzy and split the room. Now this isn’t the first time i’ve seen SFTP and it for sure will not be the last. Every show i’ve seen though, Drew (vocals) sings with such passion, constantly going up to the fence and screaming into the audience, occasionally throwing the mic into the crowd as he’s built up so much energy he just can’t control himself. Halfway through the set, Drew addresses the crowd to say a few words. Along the lines of how hard it actually is to tour the world, missing loved ones and putting stress on themselves, but seeing guys like us, reacting to every song makes it worth it. Touching from the band.

The more songs they play, the better the crowd gets. Then, ‘Damien’ This song got everyone worked up and with good reason, it is a banger. First time in the entire day i start seeing crowd surfing.

Final song, ‘Rising Sun’. A fan favourite, and knowing this is the last song everyone goes absolutely mental As soon as the show ends, the band starts clearing up the equipment.

Now this is the best part, as it is a festival there is no encore planned but the crowd are chanting “One more song” over and over again.Thomas (SFTP lead guitar) signalling that actually it’s over but there is no let up from us down here. We want to see one more song!

Much to our surprise and pleasure, it actually works! They come back for one more song and it is glorious. Such a good ending to the day!

Overall, Ghostfest was absolutely amazing. Sad to hear this may be the last Ghostfest for a while, maybe even ever. If this is the final show, it was a worthy send off. Every band playing with their hearts on their sleeves and every fan enjoying the music, beer and food!

Thank you Ghostfest. It was a pleasure. Peace, Ashleigh Carr.