Live show review of Fatherson, Allusondrugs and Feed The Rhino – Supporting Enter Shikari – playing through their electric latest album The Mindsweep and a good selection of fan favourites to top it off! 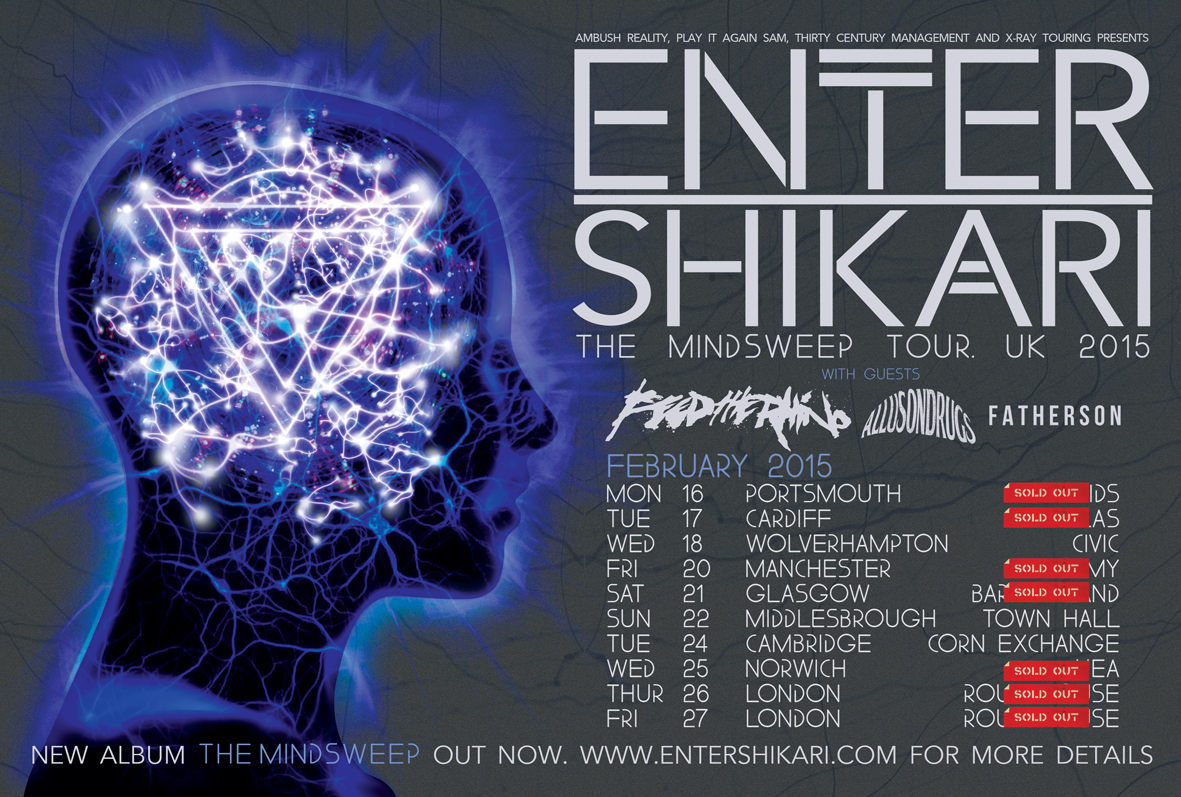 On Saturday the 21st I headed through to Glasgow for a night to watch the rather masterful, musical tornado that is Enter Shikari playing through their electric latest album The Mindsweep and a good selection of fan favourites to top it off. If you’ve seen this band before you’ll know they are nothing short of incredible both on stage and on record. If you haven’t seen them before; where have you been? A cataclysmic and contrasting night of music, the band were joined by a solid roster of Fatherson, Allusondrugs and the chaotic Feed The Rhino. Shikari know how to do supports through choosing attention grabbing live acts and on the rise bands that attain the rejection of mainstream music values whilst straying from simplicity and mediocrity.

First act on, Fatherson. A four man Scottish indie/alternative rock outfit filling the Barrowlands Ballroom with their heartfelt anthems with a warming effort for often the most disregarded “first band on” role. Having recently released their debut album I Am An Island, Fatherson are making huge waves in the indie scene, comparable to fellow Scottish bands such as Frightened Rabbit and Paws, writing emotional and instrumentally beautiful sounds that echo tales of adventure and uncertainty of youth. It was even better to realise that they hold nothing back with the delivery of their songs live, both emotionally and musically, providing a talented display that captivated their small audience of new and existing fans. Revelling in the experience of playing a venue far bigger than what the guys are usually used to, the set was short but sweet and a suiting band to ease you into the acts to follow before the penultimate headliner. If you like homegrown, serene indie with a bite, make sure to check out Fatherson.

Next to brace the stage, the eclectic and suitably named Allusondrugs, providing a racket of psychedelic/nirvana-esque rock. Opinions seemed slightly divided about the band but none the less they gave an energetic and unique performance, despite having chewing gum thrown at the lead singer and cans of irn bru delivered halfway through the set. The band lost themselves in a vortex of wailing raw grunge, that seemed more hypnotising to the audience, provoking only slight movement or the beginnings of a pit as they escaped the focus. Distorted, Smashing Pumpkins influenced guitars and punky, thick drum beats with heavy bass lines to match, accompanied with a contrast of banshee like and hazed vocals, the Yorkshire lads picked up the pace from where Fatherson left off and gave the venue a good kicking. Allusondrugs managed to accomplish significant attention with their hellish stage presence and revivals of a seemingly lost era of grunge, containing their musical confidence throughout an interesting set. Allusondrugs will also be touring the UK extensively throughout March and April if you want to check them out and also have a self titled EP available from its release last year.

Final support act of the night, punk heavyweights Feed The Rhino. Carrying from the success of their latest album The Sorrow and The Sound released Summer last year, the violent, rhythm packed outfit certainly managed to get the crowd moving in preparation for Shikari. Feed The Rhino are no strangers to sweaty, up close and personal gigs, with the frontman continuously interacting with the crowd and coordinating the various pits and walls of death popping up during their set. They may not be the most musically astounding but they absolutely bring it on stage and are considerably a definitive live band more than studio. Blasting raw, hardcore punk similar to influence of earlier Gallows material, the crowd was seething with adrenaline and a sea of fingers being jabbed in recognition of the lyrics. The standout sound of the Barrowlands managed to give an extra edge to them as well in highlighting the punchy guitar work and bouncing riffs that drives their sound. It became apparent Feed The Rhino were the most anticipated support of the night and gave nothing less than a full on and crowd surging performance, resulting in an uproar of applause from the audience as they left the stage.

All three support bands showed a fantastic display of accomplished live performances and variation of sounds that worked up to the masters of the night, Enter Shikari. This was a night of no gimmicks bands that deserved to be on the line up and delivered accordingly. A true exhibition of everything great about the current alternative rock scene.