Following on from the release of their highly successful American Beauty/American Psycho album, Fall Out Boy are currently touring the UK. I had the opportunity to see them performing on the 7th of October at Cardiff Motorpoint Arena. 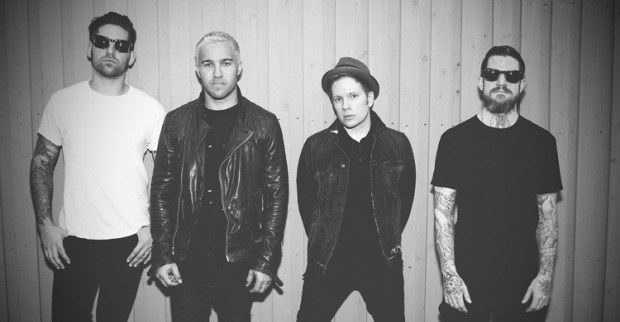 Following on from the release of their highly successful American Beauty/American Psycho album, Fall Out Boy are currently touring the UK. I had the opportunity to see them performing on the 7th of October at Cardiff Motorpoint Arena. Selling out of tickets for the event fast, it wasn’t difficult to notice that despite issues in the past, Fall Out Boy are still going strong, with fans of old and new filling the arena.

It had came as some surprise to fans when the tour line up was announced that the first couple of support acts chosen by the band were almost unheard of. However, when they took to the stage their gratitude for being included on the tour was clearly evident in their enthusiasm on stage. The first of these acts was Charley Marley, unfortunately I missed his set but from what I heard from those around me, it was short but memorable – getting the crowd bouncing and excited for what was yet to come. Next up were Matt & Kim, a dance duo from Brooklyn whose infectious energy was particularly attractive to the younger members of the audience. Although they tried to get the audience involved with throwing balloons around and similar antics, there was no interaction with anyone past the front few rows – leaving many of those further back looking on awkwardly. This paired with shaky vocals leads me to believe that they still have quite a way to go yet. The main support came in the form of Professor Green and was arguably the best support act of the night, with talented backing vocalists also featuring on well known tracks such as ‘Just Be Good To Green’ and ‘Read All About It’. The latter resulting in almost the entire crowd singing along whilst waving their phones in the air to the beat.

As lights went down for the band everyone was waiting for, the nervous excitement in the room grew – only emphasised by the short film playing on the main screen. The screen rose to reveal Fall Out Boy who immediately began their set with ‘Sugar, We’re Goin’ Down’ and then ‘The Phoenix’. With a good mix of popular older songs following such as ‘This Ain’t A Scene, It’s An Arms Race’ and some from the new album like ‘Uma Thurman’ accompanied by stunning visuals on the background screens, there was never a dull moment throughout. The inclusion of a short acoustic set in the centre of the venue was quite possibly the highlight of the evening, allowing the band to get closer to fans and a little less formal – with Pete Wentz complementing the Welsh flag for “looking like something out of Game Of Thrones” before apologising for sounding like “a stupid American”. With Patrick Stump’s vocal talent shining through as they played ‘Immortals’ and ‘Young Volcanoes’, it was clear to see that both the fans and the band were enjoying themselves. Taking to the main stage again, they belted out favourites including ‘I Don’t Care’ and their cover of ‘Beat It’ by Michael Jackson with some short intervals in which Pete took the chance to talk to the crowd, even telling a short story – addressed to fans that have had struggles over the years – about choosing who you want to be, which was met with a great reception.

As the night came to a close, the band had a photo taken with the crowd behind them before bursting into a short encore including an incredible rendition of ‘My Songs Know What You Did In The Dark (Light Em Up)’ that left fans leaving at the end in a hive of excitement. All in all, it was a great night, I would definitely go to see them again without a doubt and would recommend them to anyone. After all, they’re a band whose music will be remembered for centuries… I’m not apologising for the bad pun by the way. It was rather… irresistible!