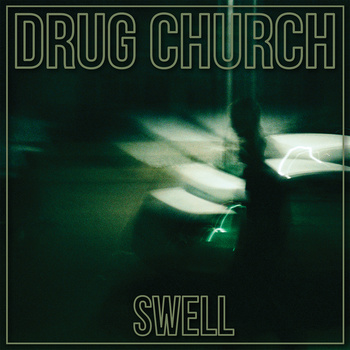 Noise Punks Drug Church released their sophomore EP ‘Swell’ in February. The collection of 5 tracks was built on the back of a year of heavy touring and mass fan adoration. Following up from acclaimed album ‘Paul Walker’ that was released in July 2013, Drug Church certainly set a high bar for themselves.

Luckily for the New York five-piece they have smashed through the ceiling with this release. Maintaining their blend of punk and alternative rock and soaring off to new heights and ideas. The EP begins with ‘But Does It Work?’ which is a track with a real ‘Big-Up’s’ feel to it with it’s spoken word style punk that is complimented by its catchy tune that leans towards 90s rough punk rock yet maintains a gaze feel to it.

‘Mall Swat’ is a gain-infused straight out punk track that wouldn’t be out of place on a Gorilla Biscuits or Propagandhi record. It’s fast paced, drubbing notion is one that really catches a glimpse of this bands roots. The track serves as the perfect antidote for a bad day of work that you can just let out all your rage too.

‘Work-Shy’ features a real grunge sounding introduction with some killer basslines that is as pungent as it is catchy before the song launches into full throttle punk delirium with some killer vocals courtesy of lead singer, Patrick. The flowing riffs that are woven throughout the song are complimented by sensational drumming that reminisce early Title Fight with a little more edge.

‘Ghost Dad’ is straight up rock song that features guitar tones that will want you to dust off your leather jacket and jump on your Harley Davidson and cruise along like the badass this song makes you feel like(obviously, I don’t own a Harley or a leather jacket but you get my drift…).

‘Zero Zero’ is the perfect end to a really impressive EP. It maintains the sound that Drug Church have demonstrated throughout the previous four tracks but ‘Zero Zero’ is a more solemn take on their formula and it’s slow burning style comes up trumps.

‘Swell’ is straight up punk EP that draws influences from various scenes and artists both modern and old but its Drug Church’s ability to combine all of these factors to mould their own brand of punk that ensures this EP is a success. The only downside I will say is that more often than not the lyrics delivered by Patrick are sometimes lost among the mixing however, for this genre this is not something new and possibly is myself being picky upon a close to flawless release.