Outside the famous Koko venue, it appears Halloween has come early as the growing squad of men and women
However, Tonight’s show at the small yet palatial London theatre, Black Metal outfit Cradle of Filth rounded off their first full UK run of dates in nearly a decade. In doing so, they demonstrated they still had their diehard fans and still had a big impact as they had for the 20-plus years they’ve been active. 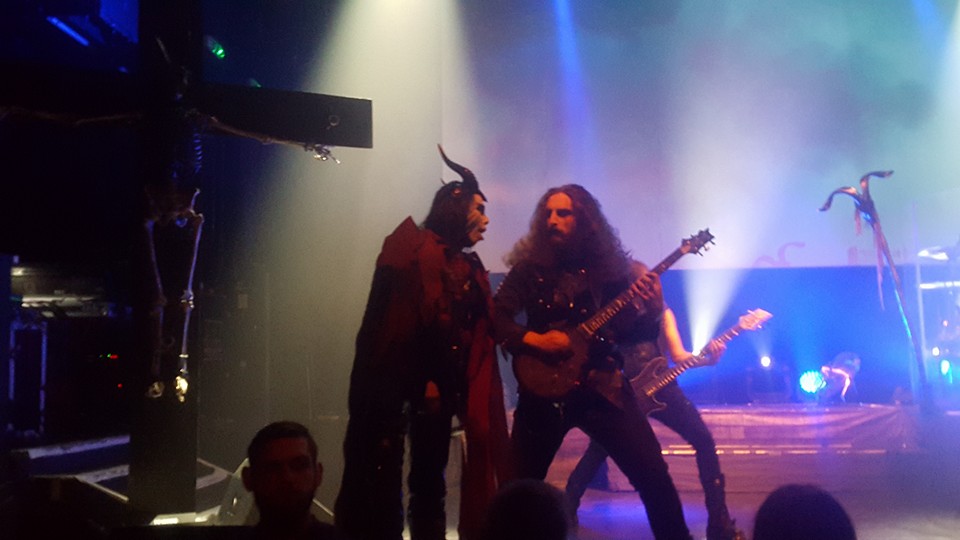 Outside the famous Koko venue, it appears Halloween has come early as the growing squad of men and women gathered outside look as though they are out to give people a fright.

However, Tonight’s show at the small yet palatial London theatre, Black Metal outfit Cradle of Filth rounded off their first full UK run of dates in nearly a decade. In doing so, they demonstrated they still had their diehard fans and still had a big impact as they had for the 20-plus years they’ve been active.

First on the bill were competition winners She Must Burn. Hailing from London, this band weren’t well known to most of the crowd prior to this show, but judging by the reaction, in the next year or two SMB will be headlining venues of this calibre. Whilst I thought their live performance had energy, the music itself wasn’t drawing me in – on this occasion the keyboards which are prominent in their recordings, were drowned out due to technical difficulty.

For the most part it sounded as though Fearless Vampire Killers were collaborating with Chelsea Grin – or if Cradle had made a foray into Goth pop. It doesn’t personally ‘grab’ me, however live they sounded decent, I can recognize talent with an open mind when I see it and I can definitely see why they have a niche appeal. 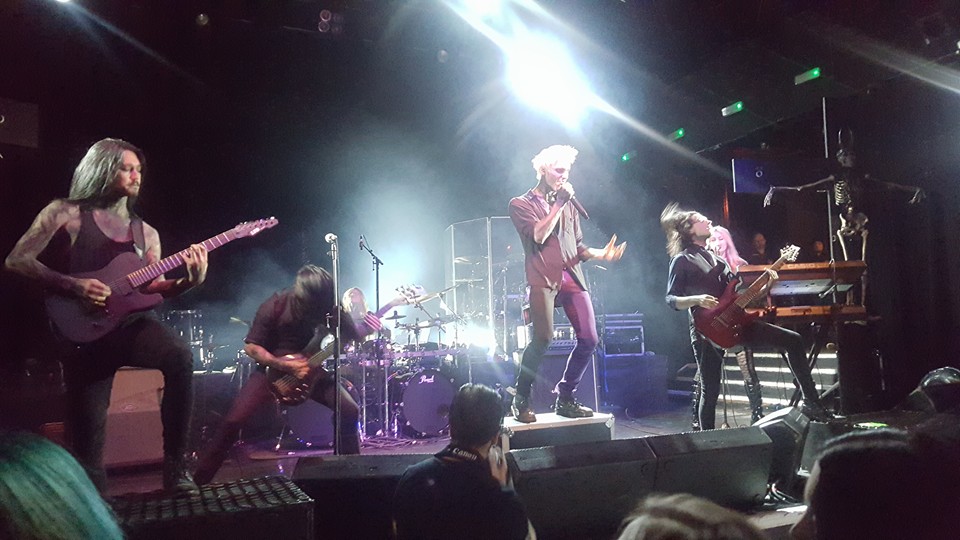 The more divisive band of the night, (being the only ones not clad in makeup, cloaks and gowns) up next were Ne Obliviscaris. A six-piece band from Australia, they describe their music as “progressive extreme metal.” 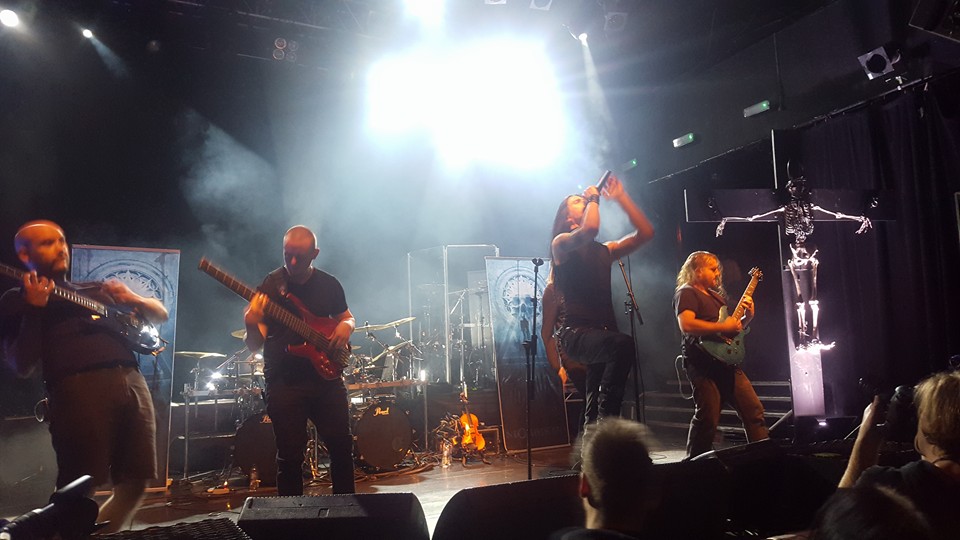 Personally I’d say they bounced around the sonic spectrum between sounding like a melodic lamb of god with violins added in, to a flamenco band with drone influences. I admire their brave experimentation, and nothing with similarities in live performance to Lamb of God can be bad in my eyes. They played a generously long set for a support band and the whole set was a solid display of one of many (strange) directions modern metal is taking.

Very soon after their set ended, the main event had begun. The audience were very excited – chants of “Cradle! Cradle! Cradle” were heard across the room, and rapturous cheering was heard just from when Dani Filth’ mic stand was bought to the front of the stage. Now, before talking about their performance itself, the theatrics of the show is worth definite honourable mention.

Big stone crosses with crucified skeletons nailed down to them, fire, grand platforms, costumes, props all contributed, making this the most theatrical live performance I’ve seen from a band.

There was also two strippers, who were admittedly both attractive and got the reaction they obviously wanted, however I just don’t understand why they made an appearance at all. Their costumes made no sense, their dancing was clumsy and their presence was only for two songs, which weren’t even consecutive. So in my view they had no real business being there other than a set of tits to stare at, so that random objectification of female nudity was good while it lasted.

Now onto the more important aspect of the closing part of the evening. At about half past 8, Cradle took to the stage in the most dramatic of fashion, coming through clouds of fog from all corners of the stage, and straight away there was no messing. 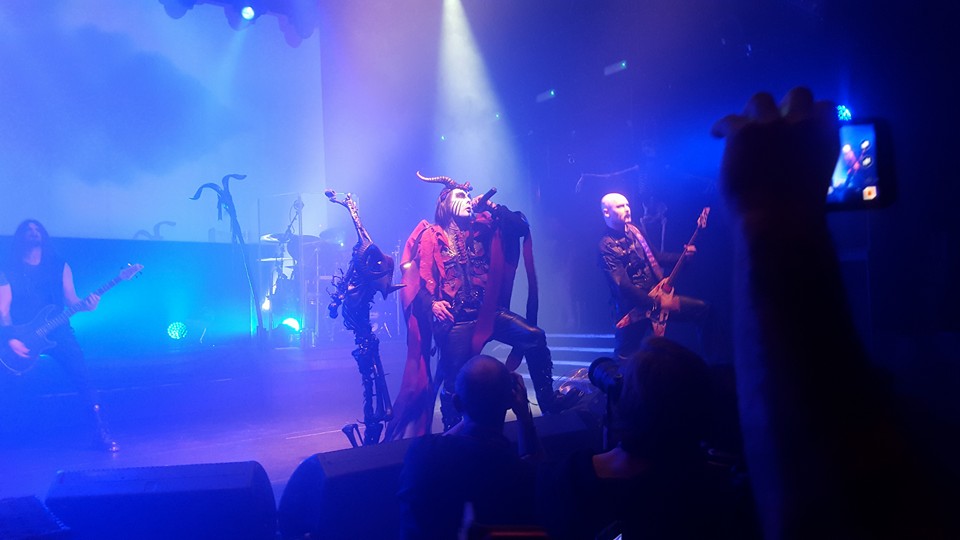 As the atmospheric intro for their second record dropped into the latter part and the first proper song of their set began, ‘Heaven Torn Asunder’ Dani’s raspy, instantly recognizable voice that sounded akin to Satan gargling battery acid bellowed out through the small theatre with a rate of power unlike much else.

From then on, right through the next hour and a half, the six metallers from Suffolk and Ipswich were unrelenting and infallible. Thankfully keeping it minimal, from the minimal communication with the crowd between songs, Dani made it known he shared the same thoughts as the crowd. This is their first full UK tour in just under a decade, no time to talk, everyone wants music – more so, older music.

And that’s what they gave – in a set list of 12 songs, only 4 were from their most recent release, the rest of it was spanning their definitive career that has solidified their status as a flagship institution of British metal and it’s evolution – their fans, squashing in at the front, flying around in the pit or head banging at the back, only enforcing this.

If nothing else the audience tonight was a reminder of the solidarity and dedication of the heavy metal community, worldwide but particularly in the UK. After tonight, it’s safe to say I don’t want to miss another cradle show in London, no matter how few and far between. And I recommend to everyone who likes heavy music to do the same while you still have the chance – even if your grunger phase is behind you, you will have a fantastic time which will not be forgotten.